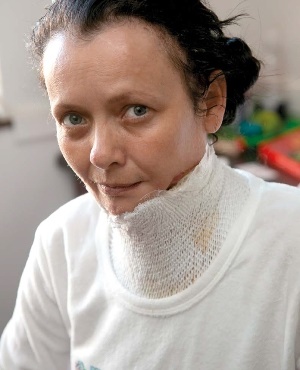 Six months ago, she was fighting for her life. Now, Madelein Carelse, 42, says the bacterial infection that destroyed her cheek and part of her neck has also given her a new perspective on life.

"I'm a different person," she told YOU magazine. "I appreciate each new day, and I see my fellow humans in an entirely new light. I've learned not to judge people, especially not for their appearance. It's not your appearance that determines what kind of person you are - it's what's on the inside."

Carelse, from Vereeniging in Gauteng, had a skin graft to her neck last week. Six months ago, she developed an abscess in her jaw which led to her contracting a flesh-eating bacteria that destroyed parts of her face and neck.

The Streptococcus anginosus bacteria nearly killed her but, fortunately, doctors managed to get it under control.

"I'm still in a lot of pain [after the surgery] but I'm alive. I thank the Lord for a second chance and another day with my family," she said.

Though Carelse acknowledged she missed the way she looked before, she was learning to accept her new appearance.

"Jesus made me a new person, inside and out. I have people who love and support me and I'm grateful to the community who've kept me in their prayers, and also offered support."

She said benefactors were helping to cover her medical expenses but there was still a lot of debt to be repaid.

"I believe I'll be healed completely, and I hope I won't be needing another operation."

We live in a world where facts and fiction get blurred
In times of uncertainty you need journalism you can trust. For only R75 per month, you have access to a world of in-depth analyses, investigative journalism, top opinions and a range of features. Journalism strengthens democracy. Invest in the future today.
Subscribe to News24
Related Links
Gauteng mother nearly loses her life to flesh-eating bacteria: ‘I was being eaten alive’
GRAPHIC PICS: Mother of three struck down by rare flesh-eating bacteria
'My self-confidence has never been higher': Flesh-eating bacteria survivor after losing all four...
Next on You
Woman sells her love online – for a cool R3,6 million