A young woman saw her deceased grandfather sitting outside his house on Google Maps – several years after his death.

The incident was shared on social media by netizen, Yajaira, who looked up her dead grandfather’s farmhouse in the community of Labor de Guadalupe in Mexico on Google.

Yajaira, who lives in North Carolina in the US, says her beloved grandfather passed away a few years ago and she never got to say goodbye to him.

In the footage, which was posted on Twitter, the netizen is seen using Google Maps to navigate along some dirt roads before arriving at a bungalow where an elderly man is seen sitting in the shade outside the front door.

“Yesterday we found out Google Maps drove through his farm so we were curious to see and as we were going through it, where the road ends, there’s my grandpa, just sitting there.”

The clip has gone viral with 4,1 million views on Twitter.

The video prompted other netizens to post videos and screenshots of their deceased loved ones who’d been recorded by Google Maps prior to their deaths. 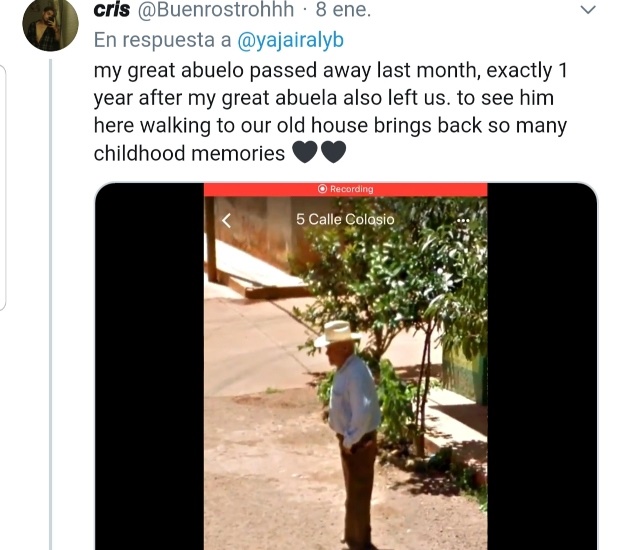 “My great grandfather passed away last month, exactly one year after our great nan left us,” one Twitter user says. “To see him [on Google] walking towards our old house brings back so many childhood memories.” “Same thing with my grandfather. We can see him just relaxing outside our house in Mexico. Every time I miss him I always go back to find it,” another user says.