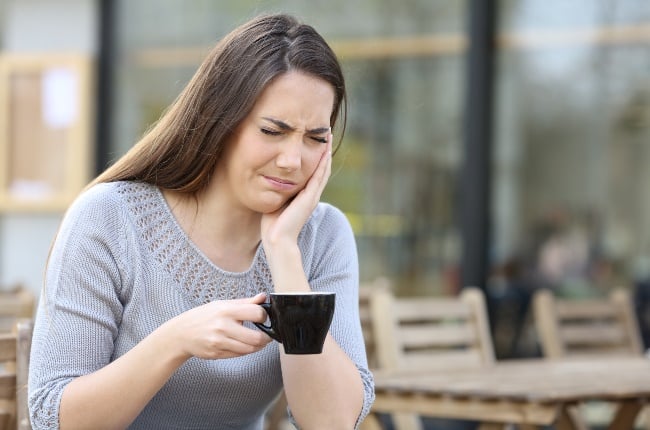 When one thing leads to another.

A mother-of-four nearly died when a tooth abscess caused an infection on her brain.

Rebecca Dalton visited her dentist at the end of last year to see to a minor abscess on her upper wisdom tooth, The Sun reports.

The 35-year-old was prescribed antibiotics and told she needed to have the tooth removed.

At the time she was heavily pregnant, which delayed the tooth extraction.

The East Yorkshire resident completed her course of antibiotics and considered the infection gone.

Earlier this year, she was rushed to hospital after family noticed her “personality changed completely” and thought she’d suffered a mental breakdown.

Doctors confirmed that the bacterial infection had spread from Rebecca’s mouth to her brain, the Daily Mail reports.

Scans revealed that an abscess had formed on the front of her brain, the pressure from it affecting her personality, cognitive abilities and bodily functions.

She deteriorated quickly and lost the ability to walk.

You may also like | Woman with scoliosis reveals how weights helped her curved spine: ‘It changed my life in so many ways’

A brain abscess results when bacteria from another infection in the head or body enters the tissue. They’re very rare so it’s unclear how many people are affected.

After losing her ability to walk, Rebecca was transferred to the neurological department at Hull Royal Infirmary.

She said her condition deteriorated so drastically she couldn’t remember being transferred to another hospital.

“'It's as if my memory has just blacked it out. I was so confused. I’d look at people and think I knew them when I obviously didn't.”

She was recently discharged from hospital and is recovering at home.

Rebecca still struggles with weakness on the left side of her body and requires adaptations to her home to make it safer for her.

What is an abscessed tooth?

A tooth infection or tooth abscess is a collection of pus formed by a bacterial infection inside the tooth or gum. The mouth is filled with bacteria from ingested foods, saliva and plaque.

These bacteria can enter a tooth or below the gum line resulting in infection or an abscess.

Tooth infections can spread to other areas of the body which could lead to serious and life-threatening complications.

It’s important to see a dentist at the first sign of tooth infection as early treatment can prevent it spreading.

There are many treatment options available from root canal treatment, apicoectomy, antibiotics or drainage of the infected site.

We live in a world where facts and fiction get blurred
In times of uncertainty you need journalism you can trust. For 14 free days, you can have access to a world of in-depth analyses, investigative journalism, top opinions and a range of features. Journalism strengthens democracy. Invest in the future today. Thereafter you will be billed R75 per month. You can cancel anytime and if you cancel within 14 days you won't be billed.
Subscribe to News24
Related Links
Little girl’s head shaven to cure infection – and her reveal video to her family is everything
Woman feels like ‘a different person’ after flesh-eating bacteria nearly killed her
Teen dies from brain infection caused by eating undercooked pork
Next on You
These Pretoria brothers are new to modelling but are already taking over Italian catwalks