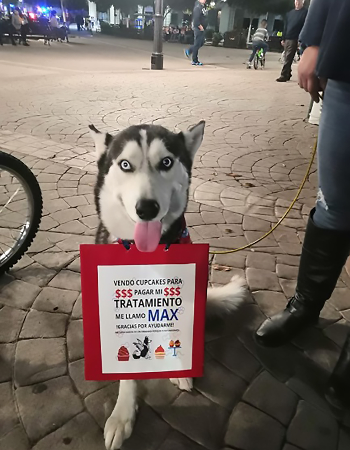 Max is suspected to be suffering from neoplasia (Photo: ASIA WIRE/MAGAZINEFEATURES.CO.ZA).

This animal lover is selling cupcakes in the street to pay for chemotherapy treatment for her pooch.

Veronica Yoselin Martinez Macias (24) is the proud owner of a Husky and has set up her own cupcake stand in a square called Plaza Zaragoza in the city of Hermosillo in Mexico.

Veronica reportedly adopted a husky named Max a few weeks ago. Max is suspected to be suffering from neoplasia, an abnormal and excessive growth of tissue that can potentially form malignant tumours in the body.

“He has a lump in his neck and was treated by the vet who said it was an infection. It became smaller but then I touched his body and realised he has lumps all over his body,” she says.

While the young woman awaits the results of Max’s biopsy, she’s baked 200 cupcakes to sell on the square to help pay for his future medical costs.

“He’ll need chemotherapy to remove the lumps, but the doctor doesn’t know what kind he’ll need yet.”