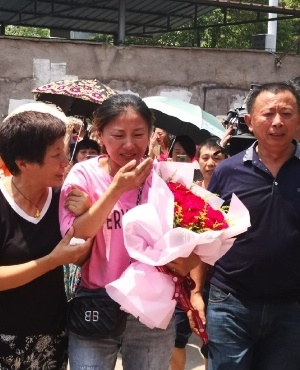 A woman who was kidnapped as a toddler has been reunited with her long-lost parents almost 30 years to the day after she went missing in the ’80s.

Jin Ting, now a mom of three, was just three years old when she’s believed to have been snatched off the streets while out by herself to buy fruit for her mom on 28 August 1986.

Affectionately known as Ting Ting, she wasn’t seen or heard from again, and her dad, Guosheng, and mom, Chen Meiliang, set off on a countrywide search.

Guosheng, who’s from Yingtan City in Jiangxi province, eastern China, recalls how he and his wife searched for their daughter.

“My wife and I worked wherever we went, travelling to most of the country’s major cities,” he said.

But the couple’s search was ultimately fruitless until their decades-long quest caught the attention of Chinese missing persons organisation Baobei Huijia (“Baby Back Home”) in March last year.

Staff at the non-profit organisation, which has reunited more than 2 000 lost or trafficked children with their parents since 2007, learnt that Guosheng and Meiliang had already given their DNA to the Yingtan City police database in 2016.

They invited Guosheng to register on Baobei Huijia’s forum, and volunteers soon discovered a woman matching Ting Ting’s age and description living in Fujian province, which is also in eastern China. The woman, who called herself Ping Ping, had also registered on the forum and was searching for her parents.

On 26 June volunteers contacted her and asked her to take a DNA test, which confirmed she’s Guosheng’s daughter.

On 13 August the couple were told a reunion had been arranged.

“I didn’t sleep for days like something was running back and forth inside my heart,” Guosheng said. “My daughter. Gone for 30 years.”

Four days later, almost to the day Ting Ting went missing three decades ago, she saw her parents in a tearful reunion in front of the whole village.

“She told us she had a good life and that her foster parents treated her well,” Guosheng said. The couple plan to accompany Ting Ting back to her hometown to meet her family.

“We’ll properly thank her foster parents and grandparents for taking such good care of our daughter.”

It’s unclear whether Ting Ting’s kidnapper – and all those involved in her trafficking – will ever be brought to justice.

Read more on:
toddlerreunionmissing
LATEST YOU