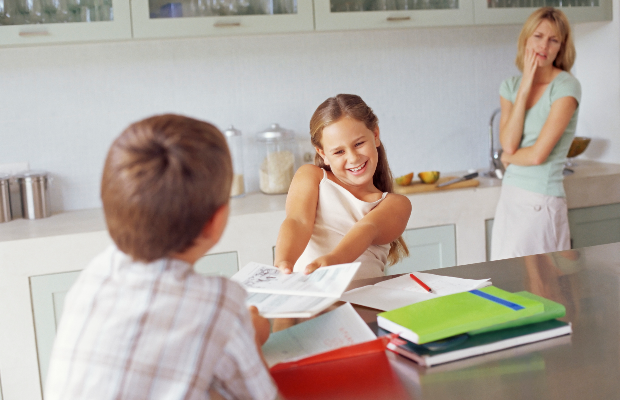 Family time. Words that should elicit warm, fuzzy feelings and bring to mind images of togetherness, fun and laughter. But not for Joanne*, whose four sons range in age from nine to 16. She’d love to have relaxed family time but instead she’s at her wits’ end thanks to the boys’ constant bickering.

“It can be anything from who’s going to sit in the front seat of the car to who goes on the PlayStation first,” Joanne (46) says. “And if I show preference to one, they take it out on one another. It’s like they’re constantly trying to exert their power over one another – it’s exhausting.”

While it can be draining for Joanne, her sons’ behaviour is actually quite normal, says Kirsten McLeod, a child counsellor at Foundations for Life in Cape Town. “Sibling rivalry is all about kids working out their place in the family.”

Different personalities and ages play a role, but siblings tend to see themselves as rivals competing for an equal share of limited family resources. How it plays out differs from family to family, but it can drive parents crazy. We asked some experts for tips on how to handle it.

While conflict between siblings is normal, incessant squabbling needs to be addressed. But before you can do something about it you need to see where it’s coming from. These are the most common triggers.

Most households don’t have unlimited resources, which means siblings at some stage have to share at least some of their possessions. “My two daughters, aged nine and six, fight endlessly about sharing the iPad – it’s got so bad the one deleted the other’s Roblox profile, which led to an even bigger meltdown,” says Lauren* (44) from Johannesburg.

Your eldest child might be an introvert while the youngest is outgoing and headstrong or vice versa. Differences in temperament along with age and gender differences can all lead to sibling conflict.

A younger sibling might complain that her older sister gets to go to a concert while she has to stay home. Or an older sister whines about having to babysit her little brother instead of going out with her pals. Feelings of unfair treatment and jealousy can lead to resentment and rivalry.

Children are always vying for their parents’ attention and when they see a sibling getting more attention than they do, it can make them act out. This can be made worse when parents compare them with each other, for example by saying things such as, “Why can’t you be more like your sister?” or “Stop being so sensitive like your brother.”

“When one child sees a sibling achieving things while they’re not achieving to the same level, it can also lead to rivalry,” says Dane Channon, a paediatric psychologist based in East London. “This can be reinforced by the parents, often unknowingly.”

“I often leave my kids to sort it out by themselves and remove myself completely from the situation,” Joanne says. But for this to work the kids must have learnt to self-manage, child counsellor Kirsten McLeod says.

One of the key ways to do this is to show your kids how to resolve disputes in a way that works for everyone. For starters, get them to stop shouting and start communicating effectively once they have calmed down, she says. Give each child a chance to voice their side of the story.

“Let them speak from the heart and listen to each other.” Teach them that they need to learn to listen without being judgmental. Then clarify what the problem is and get them to come up with a solution that works for everyone.

If they don’t come up with any ideas, introduce a solution. For instance, if they’re fighting over a new video game, propose creating a schedule that gives each child a set amount of time to play the game.

Make sure your kids know the rules of the home – for example, no hitting, name-calling or damaging other people’s property – and that they all abide by them. “This applies to parents as well,” McLeod says. When they follow the rules, praise them.

“When parents discipline one day and fail to do so the next, this can lead to uncertainty, which can result in anxiety. This is further compounded when issues of fairness and approval are triggered.”

Even if one kid is always getting into trouble and the other isn’t, don’t take sides or compare your kids – it will only make them resent each other more.

There’s no such thing as perfect equality in a family. An older child will obviously be allowed to do things their younger siblings can’t. Instead of getting hung up on trying to make everything equal, treat each child as a unique individual.

This applies to possessions too. While sharing is important, kids don’t have to share everything – make sure each of them has something special that’s entirely their own.

Remember, children copy their parents’ behaviour – so think about how you react and manage your own strong feelings, particularly anger.

“If parents can model appropriate and healthy responses to conflict or disappointment, their children are more likely to adopt these responses in similar situations – this is basic social learning,” Channon says.

6. Give them one-on-one time

If there are many siblings vying for your attention, it’s important to give each individual attention. “Children do tend to grow out of sibling rivalry if they’ve learnt social and emotional skills and if their parents have embraced and catered to their individual needs,” McLeod says.

Help boost your kids’ relationship with each other by “talking them up” to each other. For example, saying, “You’re so lucky to have such a helpful big brother!” can help them feel more positive towards each other.

Enjoying an activity together as a family can help build and strengthen sibling relationships, so think of things you can do that will keep them so busy they don’t have time to get on each other’s nerves.

If all else fails, separate your kids for a while to give them some time to cool down. Sometimes all they need is a little