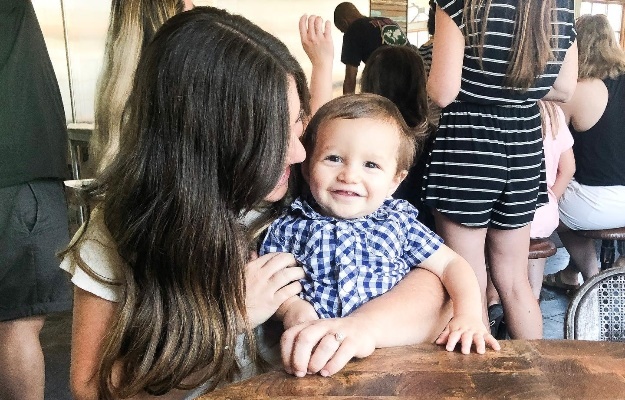 “My baby died tonight.” This is the mom’s opening line to a heart-wrenching post on Facebook on Tuesday.

Ashton Zager’s post has gone viral after she revealed that her toddler, Hank, choked on a muffin.

Ashton, from North Carolina in the US, couldn’t contain her grief and shock after losing her youngest son, who turned one year old last month.

The mom of two and her husband Casey’s social media are full of pictures of their adorable son and they would frequently share his milestones with their friends.

On 27 February, when Hank was six months old, Ashton wrote a beautiful note for her precious son.

“Sweet Hank is 6 months old as of yesterday! He continues to be the most gentle-spirited baby ever,” Ashley wrote. “Or at least out of the 2 I’ve had. He’s able to sit up and is becoming a tummy sleeper!”

But on 17 September Hank choked to death on a muffin.

“My baby died tonight. Hank died. And I’m still in shock so I’m writing it now. He died,” a devastated Ashley wrote.

“He choked on a muffin. An ordinary muffin. My child who inhaled bananas and oranges and all the scary foods with ease choked on a single bite of banana muffin. 911 was called right away.

“And the Heimlich was performed. And he never lost consciousness with us so when we got to the hospital, we thought it was going to be okay. But it was not.”

The mom goes on to say that doctors worked on him for approximately three hours.

“I’m still really confused why they couldn’t just pluck the single bite of muffin from his throat, but they couldn’t.

“I sang to him during that time. Cried to him. Yelled at him that his story was not over. That he wasn’t ever supposed to happen so it didn’t make sense this would be the end of his story.

“He was supposed to go on and have an incredible story. His brother, who named him needed him to come home and continue to be his sidekick. That’s why we named him Hank Watson. I told him to come back. He didn’t come back,” Ashley wrote.

“I’m still in shock. I think I’d like to never come out of it. Our people are here. Taking care of us.

“I don’t know what tomorrow will look like or where this journey will go. I just feel like I want to tell everyone.

“Because maybe they could just mourn for me and I won’t have to feel it. Maybe this is a nightmare I’ll wake up from tomorrow.

“I know that we live in a broken world and broken things happen. And the Lord loves me. And He loves Hank.

“And I don’t want anyone to tell me there’s a reason for this because sometimes bad things are just bad things that coexist with good things. And that’s okay. And I’m mad and I’m sad and I’m very, very confused.”

According to Mayo Clinic, “Choking is a common cause of injury and death in young children, primarily because their small airways are easily obstructed.”

Read more on:
sonmomchoking
LATEST YOU