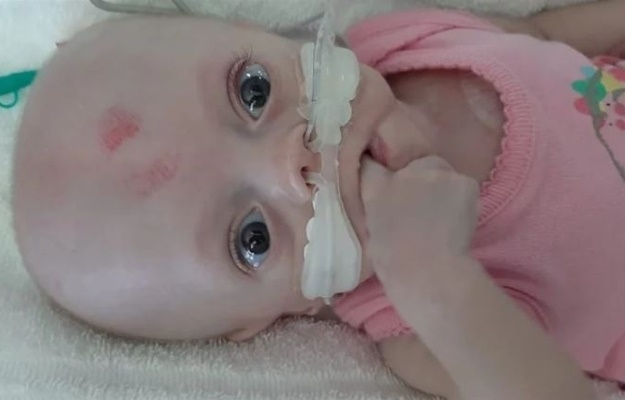 At nine months old, Ruaché Botha is the size of a newborn – and she’s spent her entire life in hospital, unable to be taken home.

“Ruaché is actually doing okay but her lungs are still weak – she struggles to breathe on her own,” her mom, Mari (30), tells YOU.

That’s why the baby hasn’t been able to leave the Life Wilgers Hospital in Pretoria. Because she’s on a ventilator, Ruaché has to be tube-fed. “We’ll have to teach her to drink and suckle.”

Now, she weighs a little more than 3,3kg – the average weight of most full-term newborns.

A blood clot had developed in the umbilical cord, causing Ruaché to stop growing in the womb. That’s why doctors decided to take her out early. At 26 weeks she was the size most babies are at 19 weeks and doctors didn’t know if she’d survive.

“It was really hard because we’re missing all her firsts. We missed her first smile – staff told us about it when we visited. Recently, she grabbed the soft toy in her crib – that’s a first too,” Mari says tearfully.

Mari and her husband, Johan (38), live in Kempton Park, east of Johannesburg, and drive the 65km to see their only child every day. The couple struggled for three years to get pregnant and describe Ruaché as their “miracle baby”.

“Ruaché gets irritated sometimes with all the tubes and wires. Our one big wish is that we can take her home,” Mari says.

Mari says because she was so premature, Ruaché’s bronchioli (smaller branches of the bronchial airways in the respiratory tract) are damaged but doctors reckon it might repair itself as she grows.

“We hope it does and that it happens sooner rather than later. But for now we just really wish she could come home with us. We want to experience her firsts for ourselves. The drive every day is also really taxing. We leave at five, spend two hours with her and drive back.”

Mari also suffered setbacks during the pregnancy and her life was hanging by a thread after she suffered kidney damage. She now has to get dialysis several times a week.

“I turned 30 this year and my motto is, ‘The way I think is the way I am.’ So, I’ve decided to think positive thoughts,” she says.

Despite her child’s and her own health issues, Mari runs her own business. She runs a performing arts school were children can learn to sing, perform and act.

“I simply decided I’m not going to curl up and die. Life goes on and I’d go insane if I don’t stay busy,” she says.