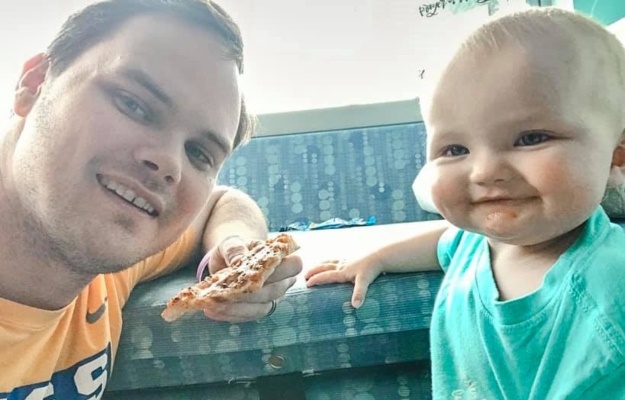 Teachers at a school in Alabama in the US have come to the aid of one of their colleagues in a major way!

David Green (31), a high school American football coach and history teacher, ran out of paid leave while caring for his one-year-old daughter who was diagnosed with cancer in October last year, PEOPLE reports.

Baby Kinsley was diagnosed with acute lymphoblastic leukaemia, a cancer of the blood and bone marrow.

The little girl’s mom, Megan (29), wrote a touching Facebook post asking other teachers in the state of Alabama to donate their own paid leave after her husband’s had officially run out, Good Morning America reports. “David is officially out of sick days at work,” she wrote.

“We want him to continue to be able to be with us at the hospital while Kinsley is getting chemotherapy so if you’re a teacher in the state of Alabama and are in a position to donate a sick day we’d greatly appreciate it!”

“Kinsley is the biggest daddy’s girl and needs him to be here as often as he can,” Megan continued. “She’d be so thankful for any donated days so she can spend time with her daddy.”

Megan’s emotional post tugged at the heartstrings of dozens of teachers in Alabama and David managed to get a total of 110 days’ paid leave. The state allows teachers to donate sick leave to others. “Thank you for allowing us to be a family,” Megan said.

“Thank you for the little bit of normalcy these days have provided. Thank you for giving so selflessly. It honestly is a bigger blessing than I can put into words.”