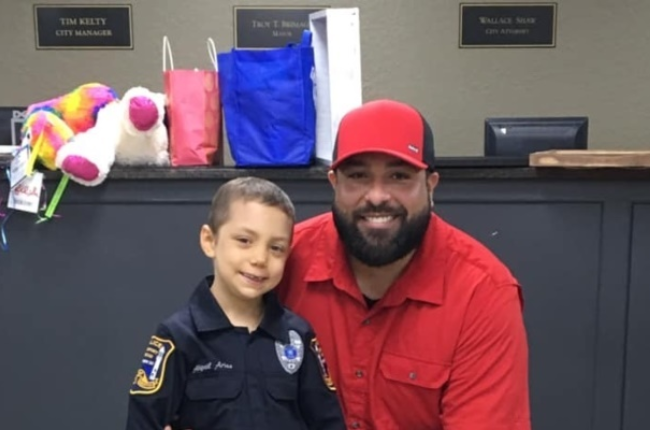 Abigail was sworn in as an honorary police officer last week Thursday. (photo:Facebook)

A six-year-old girl with an incurable cancer has fulfilled her dream of becoming a police officer.

Abigail Arias from Texas in the US is battling a form of kidney cancer typically found in children called Wilms’ tumour, CBS News reports.

Despite going into remission for five months, Abigail’s cancer returned, spreading to her lungs, and her family were recently told her disease is terminal, Complex reports.

"They basically said it's time to enjoy some life," said her mother, Eileen, adding, "It’s extremely tough. We cried for a few weeks."

The little girl’s dad, Rueben, said the news of his daughter’s diagnosis devastated the family but that they were strong in their faith.

"We believe in God. The doctors can say what they say medically, but we know God is the one that has her destiny in His hands," he said.

Police Chief Ray Garivey first met Abigail in December last year at the department’s Christmas event, where she told him about her dream of becoming a police officer.

"I said, ‘We're going to make that happen’,” Garivey said.

Abigail’s wish came true when she was invited to be sworn in as an honorary officer. The youngster wore a custom-made police uniform and stood on a stepladder as she raised her right hand and pledged to “forever promise to keep fighting the bad guys until all my cancer's gone”, reports Star-Telegram.

The police chief struggled to control his emotions while swearing in the young girl who got to sit in a police car and eat an officer’s treat – a doughnut – after receiving her badge.