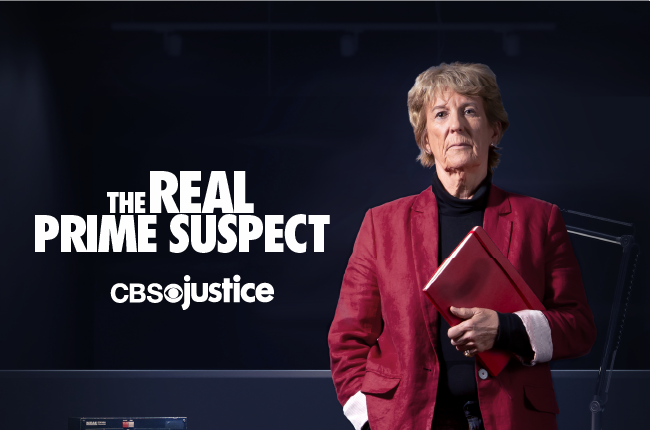 After 30 years in the UK police force, Jackie Malton had established a real name for herself. In The Real Prime Suspect on CBS Justice (DStv channel 170), she takes you back to the scenes of the crimes.

Back in the day, solving crime was very different to what it is today. Police had no CCTV, mobile phones or social media to help them out. Real detective work involved skilled investigations, careful deduction and a lot of groundwork. These were the types of cases Jackie Malton, who was also one of the first female members of the Flying Squad, solved and the kind she focuses on in The Real Prime Suspect. So successful a detective was Malton, that she was the inspiration for Helen Mirren’s character in the TV series Prime Suspect.

Malton tells us more about The Real Prime Suspect, and her experiences in the police force.

The Real Prime Suspect covers a real mix of cases. It’s a phenomenal range of investigations. I’ve truly been privileged to talk to ex-detectives and other experts within the criminal field. The cases have also impacted on pathologists, some of whom have experienced post-traumatic stress disorder as a result. It’s been absolutely fascinating.

Shooting the series on location where the crimes took place had a massive impact on shaping the production, because when you go back to the locations, you put the crimes in context. For me as an ex-detective going to the crime scenes, with the detectives explaining the crimes in the actual geographical locations, makes everything more vivid.

I joined the police force because I’ve always been fascinated by other people’s lives. I was interested in prison reform, the penal system, and the Victorian Era which had that darkness about it. The two subjects I was really good at in school were English and History. I loved stories, and I was always interested in why people did the things they did. When I started in the police force, I was one of few women in a very male environment.

I joined in 1970, when the policewomen were in a different department, they worked seven-and-a-half hours as opposed to eight so obviously the pay was less, and they dealt with women’s issues and stuff like that. When the Sex Discrimination Act came out in 1975, things changed. Some policewomen didn’t want to be part of the main establishment, but I did.

At the age 22, I was the youngest sergeant in the country, and I just wanted to make a go of it. I was in Leicestershire Police then and I had friends who played hockey with the Metropolitan Police and who said, ‘Come down to London, Jackie.’ So I did and it was the best thing that ever happened to me. I was a detective and female detectives were few and far between, so in the Flying Squad I was a token female detective within that unit.

The police force has massively changed since my time in it. It’s about disclosure, what with social media now, and it’s about complexity. They’re dealing with many more crimes than we ever dealt with. It’s about what are called ‘high harm offences’ – sexual offences, trafficking, domestic violence issues – and it’s about the dark web. It’s about the volume of crime and it’s about how quickly criminals change to the way the world is operating.

Criminals are much more sophisticated these days. The world of crime has become fast-moving and it’s about understanding technology, data, the digital world and, especially with murder if the victim is known to his or her killer, the hundreds of hours of material on mobile phones that has to be gone through.

Since I left the force I’ve been working as an addiction counsellor. I’m in recovery myself. I can’t tell you when I crossed the line from drinking to dependency on alcohol but I definitely crossed it. I went to Alcoholics Anonymous in 1992 and I’ve never had a drink since. Part of it is about giving back.

I can’t choose the most memorable or challenging case I’ve personally worked on.

I don’t think it would be fair. Every case you get is absolutely challenging. There’s the case where eight-year-old Vishal Mehrotra went missing in Putney in 1981 on the day of the Royal Wedding and was found dead in Sussex six months later. Then I was on an investigation where 13 black teenagers died in a fire in Deptford. Each and every case I’ve had is a challenge because if you’re a detective that’s your job.

We live in a world where facts and fiction get blurred
In times of uncertainty you need journalism you can trust. For only R75 per month, you have access to a world of in-depth analyses, investigative journalism, top opinions and a range of features. Journalism strengthens democracy. Invest in the future today.
Subscribe to News24
Next on You
CATCHING UP WITH HAIR KNOCKOUT’S ADEOLA ARIYO