A Buckingham Palace employee will spend eight months in jail after stealing memorabilia worth more than R2 million.

Canto, who worked as a catering assistant, stole a Companion of the Order of the Bath and a Commander of the Royal Victorian Order medal while claiming to be cleaning to prevent Covid-19.

He also took a picture signed by Prince William and wife Kate Middleton and a photo album of the Royal State Banquet during US president Donald Trump's state visit, which he sold for £1 500 (about R30 700) on eBay. Canto, from North Yorkshire in the UK, had worked at the palace for five years. He was given extra Covid-19 cleaning duties, which gave him access to the lockers he raided for the valuables.

At his sentencing hearing, Canto’s defence told the Southwark Crown Court he stole and sold the goods to pay off loans he had racked up as he couldn’t survive on the palace’s “minimal” wages.

They also argued he had no previous convictions and had a successful career caring for those living with Alzheimer’s.

Judge David Tomlinson took it easy on Canto, reducing his sentence from 18 months to just eight.

“I note the persistence with which you committed the offences,” Judge Tomlinson said. “It was a period of some nine months.

“I give you full credit for your timely plea, level of cooperation and good character. As far as I can see, you were in financial difficulty and thought this was the way out.”

Canto stole a total of 150 items, which included signed pictures of Prince Harry and Meghan Markle, a goldfish patterned tea set and a personalised cellphone made for Prince Andrew. 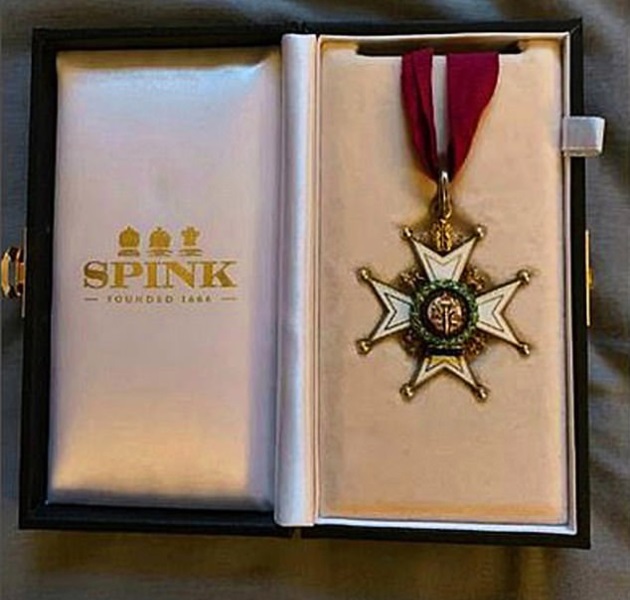 One of the stolen items was a Companion of the Order of the Bath medal. (Photo: TikTok)

His eBay records show he made around R219 000 in sales, The News writes.

Retired British Army officer Major General Matthew Sykes, who served in the royal household from 2007 to 2010, lost his Commander of the Royal Victorian Order.

“I was made aware on 24 August a number of medals had gone missing,” he said in his victim-impact statement. “I checked my locker and found the medal was missing from my personal locker. Police were made aware on 25 August.

“To have something stolen from you is always upsetting, but this is a medal given to me privately and personally by the queen.

“The original is irreplaceable.”

Canto pleaded guilty to all three counts of theft by an employee.