Princess Gabriella of Monaco showed off her natty fashion sense yet again during a traditional boat-burning ceremony to celebrate St Dévote Day in Monaco.

The six-year-old daughter of Princess Charlene and Prince Albert stole the show in her smark pink outfit complete with matching bucket hat and trendy black and white trainers. She accessorised with a pair of white tights and a silver sparkling bag. Mom Charlene of course looked as stylish as ever in a long black and red coat with black beret.

The men of the family kept it simple in dark coats with Gabriella’s twin brother, Prince Jacques, also opting for a pair of trainers and a navy beanie to ward off the winter chill.

Saint Dévote's Day is a national holiday in Monaco and is named after a Christian patron saint, who was killed and tortured for her faith in the fourth century.

Residents burn a boat every year in honour of Devota, a young Christian women from Corsica, who was killed by the Prefect Barbarus under the Emperors Diocletian and Maximian.

Legend has it her body was removed by believers during the night and taken on a boat to Monaco to be entombed in a chapel in 303AD. She's not afraid to get her hands dirty! Gabriella was seen helping to stoke the fire. (Photo: Gallo Images/Getty Images) 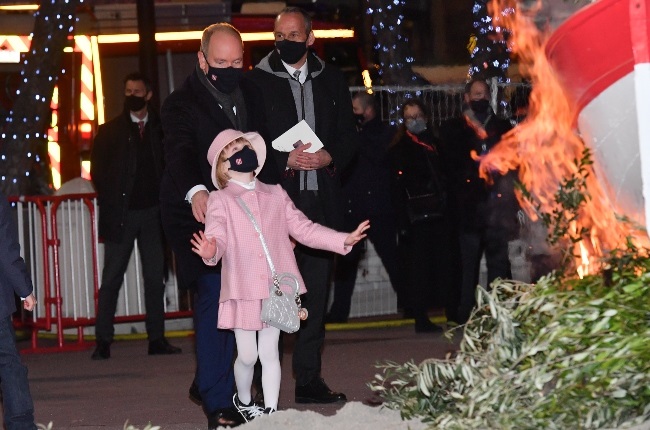 On 25 January Charlene celebrated her 43rd birthday which according to Albert (62) was a “intimate family affair” due to Covid-19 concerns and because his wife “doesn’t like big celebrations”, he told People.

This isn’t the first time the twins have stepped out looking stylish. Scroll through our gallery to see some of their fashionable looks over the years. At the Fete de la Saint Jean celebrations in June 2020, Princess Gabriella looked pretty as a princess in a cream dress while her brother donned a dapper suit. (Photo: Gallo Images/Getty Images) Sailor chic! The twins looked yacht ready at the start of the Calvi-Monaco Water Bike Challenge in September 2020 which their mother took part in. (Photo: Gallo Images/Getty Images) Sometimes it's not just mommy who sets the style rules! Gabriella emulated Albert's blazer look at the Saint Devote rugby tournament in May 2019 in Monaco. (Photo: Gallo Images/Getty Images) We live in a world where facts and fiction get blurred
In times of uncertainty you need journalism you can trust. For 14 free days, you can have access to a world of in-depth analyses, investigative journalism, top opinions and a range of features. Journalism strengthens democracy. Invest in the future today. Thereafter you will be billed R75 per month. You can cancel anytime and if you cancel within 14 days you won't be billed.
Subscribe to News24
Related Links
EXCLUSIVE: Princess Charlene of Monaco on the real reason she shaved her hair and how she feels...
Princess Charlene of Monaco shares new photo of her twins’ sixth birthday
Victory for Princess Charlene as she wins epic water race
Next on You
Just call her GI Kate! The Duchess of Cambridge posts never-before-seen photos