New revelations! Princess Diana thought Charles should step aside to let William be king – and described her marriage as “hell” The People’s Princess told Sir Max Hastings, former editor of the Daily Telegraph, how she really felt about her husband in an interview 25 years ago. However, Hastings declined to publish anything in a bid to “keep a lid” on it to prevent a huge royal scandal.

Speaking in Diana: The Truth Behind the Interview, Hastings – who was knighted in 2002 for his services to journalism – says he spent a few hours with Diana in 1995, a year before she announced she was divorcing Charles. The mother of two drove down to his country home in Berkshire and they spent a few hours together, during which time she poured out her heart.

“It became clear first of all how much she hated Charles . . . yes, she did hate Charles,” Hastings says in the doccie. “When I said, ‘Were there ever happy times?’ she said, ‘No, the marriage was hell from day one.’

“I was amazed by the frankness and the directness with which she said that. She said all she cared about was William's succession to the throne and she said to me, quite explicitly, ‘I don't think Charles can do it.’ The outcome she wanted to see was for Charles to stand aside as heir and for William to occupy the throne. This was pretty dynamic stuff.”

Explaining his decision not to publish details of their conversation, he says, “I felt that my job was to try to help them keep a lid on the worst of this, rather than to lift it off.”

But he may well not have bothered as three months later she lifted the royal lid on her failed marriage herself. 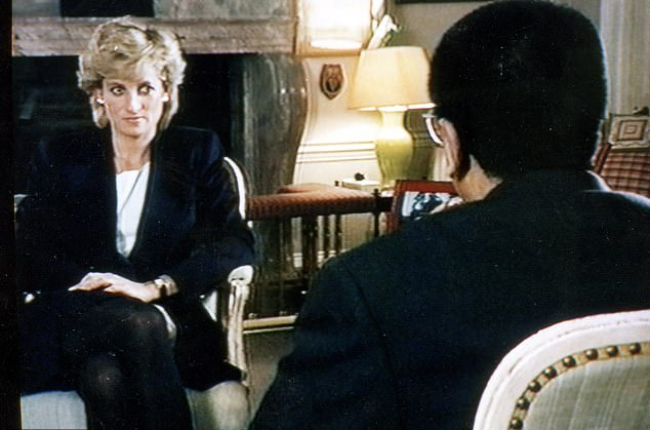 In that now infamous TV interview with BBC journalist Martin Bashir, Diana admitted “there were three of us in this marriage, so it was a bit crowded”.

The new documentary includes allegations about Bashir, including how he showed “faked” bank statements to Diana’s brother, Charles Spencer, in a bid to impress him enough to set up a meeting with his sister.

Hastings says he told Diana he was “terribly flattered” she had “come all the way down to the country to talk to me”. In response, she said she was “terribly anxious for my side of this to come out”.

“Diana said a lot of stuff on several occasions which I thought [was] for the fairies. She asked me what I knew about a conspiracy to sort of have her put down.

“I said it sounded absolutely crazy to me. But she, I think, did believe this sort of stuff and it was one of many, many things that made one feel so desperately sorry for her . . . this sense of vulnerability.

“You may be a very streetwise, brilliant enchantress, but you can also be not very bright. If you've got nobody sensible to advise you, or if you have but you won't take their advice, you're in a pretty bad place.”

A BBC spokesperson brushed aside the allegations against Bashir (57). “A handwritten note from Princess Diana attested to the fact the princess had not seen the ‘mocked-up’ bank statements and that they played no part in her decision to give the interview.”

“Bashir himself is seriously unwell with Covid-19 related complications and we cannot put any of these questions to him.”

We live in a world where facts and fiction get blurred
In times of uncertainty you need journalism you can trust. For 14 free days, you can have access to a world of in-depth analyses, investigative journalism, top opinions and a range of features. Journalism strengthens democracy. Invest in the future today. Thereafter you will be billed R75 per month. You can cancel anytime and if you cancel within 14 days you won't be billed.
Subscribe to News24
Next on You
From edible proteas to stuffed Windsor pheasant: how King Charles wined and dined President Cyril Ramaphosa