Queen of controversy: backlash after Meghan weighs into the ills of social media Meghan, Duchess of Sussex, has been accused of ‘plagiarising’ Netflix's The Social Dilemma in a virtual summit speech. (PHOTO: TWITTER/@FORTUNEMAGAZINE)

She used to be on social media a lot and even had her own lifestyle blog – but Meghan says for her own “self-preservation” she hasn’t been on social media for a long time.

The duchess of Sussex was invited to speak at the Fortune Most Powerful Women Next Gen Summit, an online event reserved for guests willing to pay a $1 750 (R28 875) fee, recently. Meghan, who spoke via video call from her home in Santa Barbara, California, added she believes social media had the same capacity for causing addiction as drugs do.

“There are very few things in this world where you call the person who’s engaging with it ‘a user’. People who are addicted to drugs are called users and people who are on social media are called users,” the 39-year-old said. “There’s something algorithmically that’s in there that’s creating this obsession that I think is very unhealthy for a lot of people. I have a lot of concerns for people that have become obsessed with it and it’s so much a part of our daily culture for so many people that it’s an addiction.” No sooner had the clip surfaced than Twitter users began pointing out the comments she’d made about social media addiction were almost identical to ones featured in the hit Netflix documentary The Social Dilemma.

“[Meghan] ripped off the Netflix documentary The Social Dilemma theory about [social media] users being like drug addicts and had the cheek to say she hasn’t been on it for years?” one tweeter wrote.

One user, who accused the duchess of plagiarism, shared screengrabs from The Social Dilemma featuring a quote by statistician Edward Tufte.

“There are only two industries that call their customers ‘users’: illegal drugs and software,” his quote reads. The doccie also examines the ways social media algorithms are specifically designed to encourage addiction, another point Meghan made during the summit. 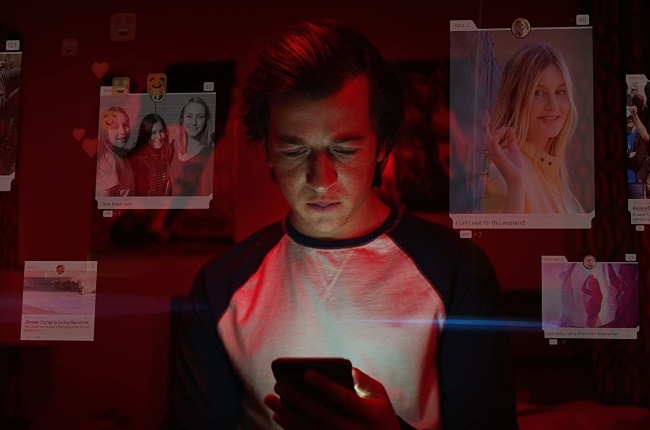 The duchess also raised eyebrows after she told Fortune’s associate editor Emma Hinchliffe that she hadn’t “been on social media for a very long time” – despite sharing a joint account with Prince Harry for a couple of years before they stepped down as senior royals earlier this year.

“We had [an Instagram account] through the institution and our office that was in the UK. But that wasn’t managed by us that was a whole team,” Meghan said, adding that she has “made a personal choice to not have any accounts”.

Before she met Harry, Meghan was active on social media, managing her own accounts as well as her lifestyle blog The Tig.

This isn’t the first time this month Meghan made comments about social media that were deemed controversial.

She described herself as “the most trolled person in the entire world in 2019” when she and Harry made their podcast debut for World Mental Health Day earlier this month. Entitled Teenager Therapy, the podcast is described online as “five stressed, sleep deprived, yet energetic teens who sit down and talk about the struggles that come with being a teenager”.

“I’m told that in 2019 I was the most trolled person in the entire world – male or female,” Meghan told the group of teens.“Now eight months of that, I wasn’t even visible,” she continued. “I was on maternity leave or with a baby, but what was able to just be manufactured and churned out – it’s almost unsurvivable.

“That’s so big, you can’t even think of what that feels like. Because I don't care if you're 15 or 25, if people are saying things about you that aren't true, what that does to your mental and emotional health is so damaging."

Criticism of Meghan followed, with commentators accusing the duchess of making everything about her.

The Telegraph’s Celia Walden accused her of hogging the limelight rather than listening to what the teens had to say, of “virtue-signalling” and being “tone deaf”. What’s more, she pointed out Meghan wasn’t actually the most-trolled person of 2019.

According to a study by onlinecasino.ca, that dubious distinction belongs to singer Adele. Second was British reality star Gemma Collins and Meghan was third. The survey showed that while Meghan did have a high number of mentions on Twitter in 2019 with 37 000 accounts referring to her in their tweets, more than a third of those were positive. Just over half were negative, while 15 % were neutral. We live in a world where facts and fiction get blurred
In times of uncertainty you need journalism you can trust. For only R75 per month, you have access to a world of in-depth analyses, investigative journalism, top opinions and a range of features. Journalism strengthens democracy. Invest in the future today.
Subscribe to News24
Related Links
Shocking new documentary reveals the tactics social media giants use to steer the way you act and...
‘I’m too intimidated to call her!’ Meghan Markle’s Suits husband speaks out
Prince Harry and Meghan Markle looking towards new horizons as they officially depart from the...
Next on You
One remembers one’s first broadcast! Queen celebrates 80 years of historic public speech