The Duchess of Cambridge was effortlessly chic at this year's Remembrance Day service in an outfit she wore in 2018. (PHOTO: Gallo Images/Getty Images)

Kate Middleton was the picture of sombre elegance at the Remembrance Day memorial service on Sunday 14 November.

And if her outfit looked familiar it's because the 39-year-old future queen recycled her 2018 look – an Alexander McQueen military-style coat – which she teamed this year with a wide-brimmed Tiffany hat and black leather gloves.

She also added diamond and pearl drop earrings and a £20 (about R400) Royal British Legion crystal poppy brooch alongside a trio of larger poppies, the internationally recognised symbol for Remembrance Day, which honours those who have died in the line of duty for their country. Kate was flanked by her mother-in-law Camilla, Duchess of Cornwall (left) and Sophie, Countess of Wessex. (PHOTO: Gallo Images/Getty Images) 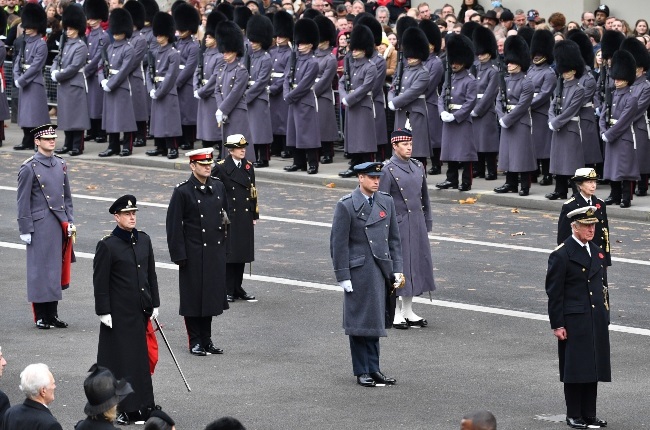 The mother-of-three took her place between the Duchess of Cornwall and the Countess of Wessex on the Foreign Office balcony at Whitehall in London.

Noticeably absence was Queen Elizabeth (95), who was advised by her doctors to stay at home after spraining her back.

A statement by Buckingham Palace yesterday read: "The Queen, having sprained her back, has decided with great regret that she will not be able to attend today's Remembrance Sunday Service at the Cenotaph. Her Majesty is disappointed that she will miss the service.

She has only missed six Cenotaph ceremonies in her long reign, the last one being in 1999. 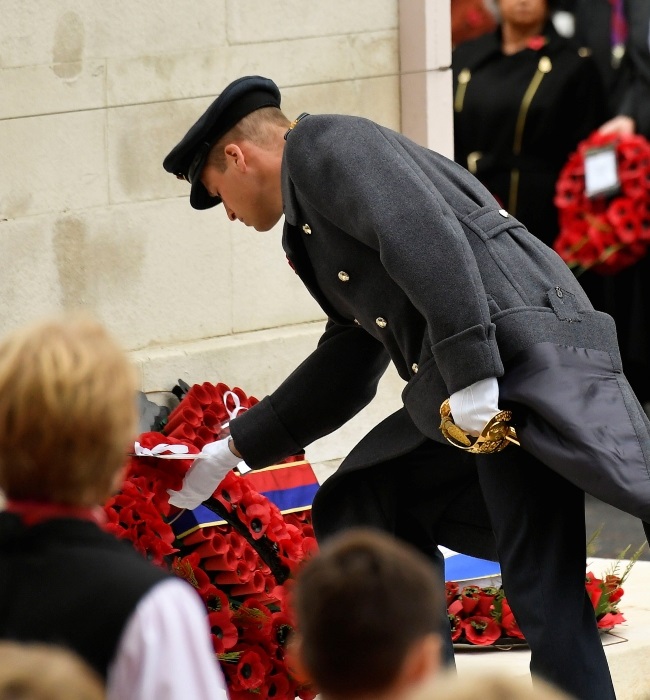 The Duke of Cambridge lays a wreath at the Cenotaph. (PHOTO: Gallo Images/Getty Images)

Prince Charles, who celebrated his 73rd birthday on the same day, and Prince William, laid the wreaths in Her Majesty's absence.

Last year's Remembrance Sunday service was scaled back due to the pandemic and took place without members of the public present.

While she's stuck to the trademark black since making her Remembrance Day debut in 2011, Kate has sported a more military look in the past three years. And while she favoured her hair loose in her earlier years, she's also switched to a more austere up-do in recent years. She wore the same coat again in 2012, paired with pearl-drop earrings loaned to her by the queen and a Philip Treacy hat. (PHOTO: Gallo Images/Getty Images) She opted for one of her favourite designers, Alexander McQueen in 2014. Her hat was a repeat of the one she wore in 2011 by British milliner Jane Corbett. (PHOTO: Gallo Images/Getty Images) In 2017 she opted for Italian brand Dolce & Gabbana, which featured a collarless style and two rows of gold-tone buttons.(PHOTO: Gallo Images/Getty Images) We live in a world where facts and fiction get blurred
In times of uncertainty you need journalism you can trust. For 14 free days, you can have access to a world of in-depth analyses, investigative journalism, top opinions and a range of features. Journalism strengthens democracy. Invest in the future today. Thereafter you will be billed R75 per month. You can cancel anytime and if you cancel within 14 days you won't be billed.
Subscribe to News24
Related Links
Kate’s photo exhibition continues to uplift the nation
Fans praise classy Kate as the duchess re-opens museum in chic black blazer
Kate takes the crown as the most influential lockdown stylista!
Next on You
Joy for Princess Stéphanie of Monaco as she prepares to become a granny for the first time