Still rocking a tiara at 94! Check out the queen’s fabulous new portrait In a new portrait released recently by the Canadian government and taken by royal photographer Chris Jackson, Her Majesty rocked it again – proving that at the ripe old age of 94 no one can wear a tiara quite like she can.

The portrait sees the monarch posing in a white dress adorned with insignia that includes the Sovereign of the Order of Canada and the Order of Military Merit. But it was her glittering diamond and sapphire headpiece and matching jewels that stole the show.

The queen’s matching necklace and earrings are known as the King George VI Victorian Suite and were given to her as a wedding present in 1947 by her father, King George VI. The jewels are believed to date back to the mid-1800s with the bracelet added to the set in the 1960s.

The jewels have a connection to Canada as the queen wore them during her royal tour of the country in 1990. The Queen wearing the tiara in 1990 (Photo: Gallo Images/Getty Images)

While newly released the portrait was actually taken at Windsor Castle in March 2019.

Meanwhile, the queen recently embarked on her first royal engagement outside palace walls since she started self-isolating at Windsor Castle earlier this year, when she visited the Defence Science and Technology Laboratory near Salisbury. 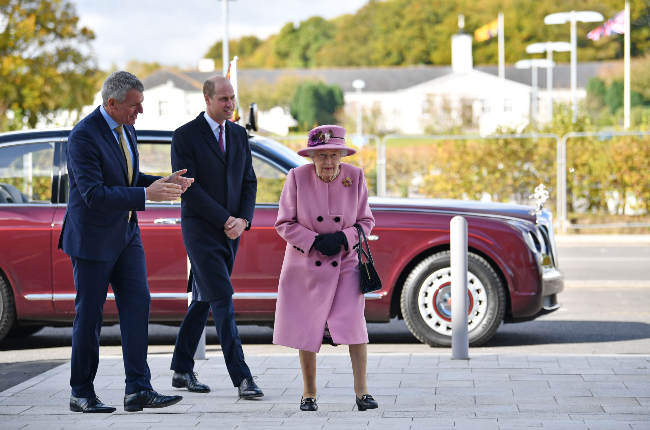 Joined by her grandson Prince William – the first time the two have done a joint engagement since 2017 – she met with scientists who’ve been providing vital support in light of the Covid-19 pandemic.

She also paid tribute to the staff’s response to the Novichok poisoning attack in 2018 where Sergei Skripal, a double agent for the UK’s intelligence services, and his daughter, Yulia, were poisoned with the nerve agent in Salisbury but managed to recover.

The monarch donned a stylish pink Stewart Parvin cashmere coat and hat for the occasion, which drew much praise from fans.

“That shade is so flattering on Her Majesty... she looks beautiful!" tweeted one while another added, “HM The Queen looks lovely in that colour.”

Proof that one remains one’s subjects’ favourite, even after all these years.