Prince George is a budding foodie who loves traditional Italian fare. (Photo: The Duchess of Cambridge/Kensington Palace via Getty Images)

As a child of the British royal family, you’d expect the seven-year-old future king to have rather traditional tastes when it comes to food. Roast beef and Yorkshire pudding, perhaps, poached salmon (one of his great-grandmother’s favourite meals) or something like beef Wellington or even good old bangers and mash.

Not Prince George. The eldest child of Prince William and Kate Middleton likes nothing better than tucking into a bowl of spaghetti carbonara. 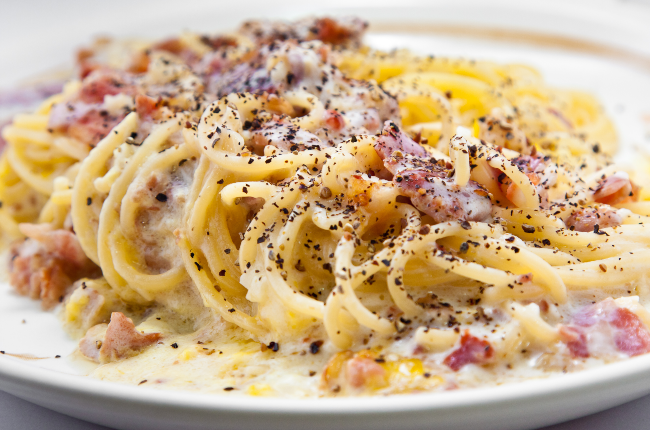 Italian celebrity chef Aldo Zilli, who’s worked alongside William with the youth homeless charity Centrepoint, made the revelation, adding it’s certainly not what one would expect from a seven-year-old.

He added that future king would not be able to resist his special take on it.

“If George has my carbonara, he will never have another one, so I need to go and make it – let's get the ball rolling, send me to the palace to cook!”

It seems all three Cambridge children are partial to Italian fare. Kate has previously shared that George, Princess Charlotte (5) and Prince Louis (2) sometimes help her to making their favourite cheesy pasta recipe.

She also says her eldest two love to make pizza dough and Charlotte is also a big fan of another Italian staple – olives.

In June during lockdown the family extended their love of food by delivering homemade food parcels, which included their own homemade pasta, to the elderly in their area.

We live in a world where facts and fiction get blurred
In times of uncertainty you need journalism you can trust. For 14 free days, you can have access to a world of in-depth analyses, investigative journalism, top opinions and a range of features. Journalism strengthens democracy. Invest in the future today. Thereafter you will be billed R75 per month. You can cancel anytime and if you cancel within 14 days you won't be billed.
Subscribe to News24
Related Links
Dear Father Christmas . . . Prince George, Princess Charlotte and Prince Louis have already sent...
Prince George knows he’s ‘very different’ from his siblings
Birthday boy! Prince George turns seven
Next on You
Sarah Ferguson will spend the holidays with the royal family for the first time in 30 years