Jessel Garcia from Cartagena, Colombia, was a contestant in the Reinado de la Independencia 2018 beauty contest where she represented her local community.

After the competition, the 22 year old decided to shave off all her hair and intends to sell her luscious locks to buy presents for underprivileged children.

Speaking about the decision, which saw her grabbing headlines even though she didn’t win, Jessel said it marked the beginning of a new life and freedom.

On a photo she posted on Instagram, the young woman can be seen sitting on a table smiling widely for the camera.

"Every day I am more in love with me,” she captioned her post.

Jessel said her drastic decision to shave her head happened after the pageant and it wasn’t a fashion statement or because of illness.

"My hair was bothering me, my sister bought me scissors and I was waiting and wanting that moment,” said Jessel.

“After cutting all of my hair, my boyfriend was in charge of shaving [my head]."

Jessel, who studies business administration, added that she wanted to put an end to stereotypes.

She hopes to open her own restaurant next year and also plans to focus on her career as a model. 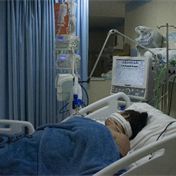