Bloemfontein teen loses 53kg after being bullied: ‘Everyone used to make fun of me’ “Sometimes people would just walk past me as if I didn’t exist or they’d laugh at me. One guy threw a stick at me and said, ‘You fat ass’,” she recalls.

By the time she reached Grade 9, Marike Pienaar from Bloemfontein weighed 123kg and she was miserable.

She was a boarder in the school’s hostel and she dreaded leaving her room.

But the Marike we meet today is a completely different person.

The confident 17-year-old matriculant now tips the scales at around 70kg, a whopping 53kg lighter than she was at her heaviest, and she’s eager to tell YOU the story of how she turned her life around. In primary school it wasn’t so bad, she tells us. “I had friends and I was popular.” But things went downhill when she started high school. “Everyone used to make fun of me, and I was bullied,” she says.

She recalls how one day she just got tired of the humiliation and the stares.

“I’ve always been fat. My whole family was fat. Then my parents suggested we all go on a diet.”

So in her second year of high school Marike started following the popular low-carb, high-fat Banting  diet – and she’s never looked back.

Marike was so determined to lose weight that even when her family gave up on the diet she carried on solo.

“I didn’t want to stop because within a month I’d started to see a difference. I’d get on the scale and see I was 2kg down – that really motivated me.” In the first year, she lost about 15kg. It was the encouragement she needed to carry on.

Before embarking on her epic weight-loss journey, Marike would eat whatever her heart desired, she tells us.

“Our hostel is close to a shopping centre so whenever I was hungry I’d go there, buy whatever I want and eat it.”

Her brother, Nico (16), also boards at the hostel, and they’d have a feast whenever they went to the centre together. Going home at weekends and over the holidays provided its own temptations.

“My mom would make lovely food,” she says. “We’d [also] eat chips and chocolates and go all out.”

So it’s no surprise that the first year of banting had its challenges.

“I had to prepare my body. It took me a year to get my head straight. I had to tell myself I don’t need that stuff (processed and unhealthy food) anymore.” 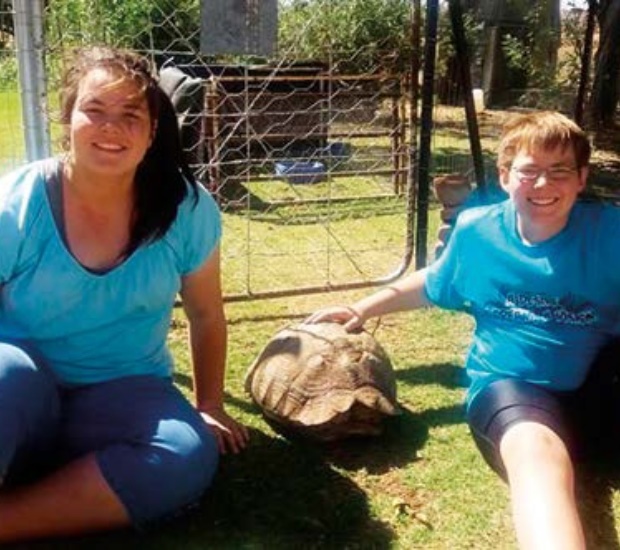 “I now eat only natural food and it’s no longer difficult to resist temptation,” she says.

Hostel life posed challenges for the dieting teenager and it took a lot of focus and willpower for Marike to make her new eating plan work.

For the first two years she ate food brought in from home. “My mom would pack biltong and vegetables for me; cucumber, lettuce – that sort of thing.”

“Banting is expensive, and my mom and dad paid for all my food for two years – plus they paid the hostel for the food I didn’t eat there.”

Now she eats from the school kitchen because they prepare special dishes for her.

She usually has two boiled eggs and half an avocado for breakfast. For lunch she has the remaining avocado with salad, and whatever protein they dish up for her, such as pork, lamb or fish. And Marike loves having tuna salad for supper. When hunger pangs strike, she snacks on raw broccoli or pumpkin.

“Our taste buds are incredible. There are certain things I wouldn’t have touched before I was on a diet, such as green pepper and onions. Now I love them,” she says.

Marike was initially sceptical about the high fat content in the Banting diet.

“You’re taught from primary school that fat is bad and that you shouldn’t eat it. But when I lost 15kg, I could see that it works.”

She never craves junk food, she says. “If I have a sweet craving, I’ll make myself iced coffee, which is dairy-free and simple to make too. You chuck in ice with a bit of coffee powder and vanilla essence and just blend it.”

But her strict self-discipline hasn’t stopped her love of cooking and she makes her family tasty desserts every weekend.

“My dad always jokingly asks me, ‘Are you trying to kill us?’ But he loves them.” Jaco reckons he’s done with trying to lose weight, Marike tells us.

“My dad said he’s too old. He’s already met his wife and has his children and he’s not going to waste the rest of his life on a diet,” she says with a chuckle.

But Nico has followed in his sister’s footsteps  this year and is making good progress.

Even though she’s never felt better, Marike still struggles with loose skin on her arms, tummy and thighs.

“I’m a bit insecure about it. I’d always dreamt of wearing a bikini. Now I have the bikini but I’ve also got all this loose skin.”

Her dad has told her to be proud of her accomplishment.

“He said I must wear my loose skin with pride and maybe some day I’ll realise it’s not that bad.”

Marike relishes all the choices that losing weight has given her. Whereas once just the thought of wearing shorts would freak her out, she can buy pretty much what she wants now.

“I love my new body. I can go into any shop and get any T-shirt or dress,” she says with a smile.

Another first for Marike is that this year she’s started going to a gym.

“I never used to go because I was scared. I was too fat and thought people would laugh at me. Also, it was difficult to do certain exercises.”

She’s an inspiration to the other girls in her school, many of whom ask her how she does it.

“They also struggle with their weight and people not being nice to them. I know what they’re going through. School can be terrible if you’re fat and you’re a girl,” she says.

“People who didn’t want to have anything to do with me like me now that I’m skinny.”

Marike, who plans to study consumer science next year, says her way of eating has become a lifestyle.

“I’m never going back to consuming sugar and starch.”

“I’m happy. I can fit into my clothes. I can do anything I want.” She’s especially looking forward to her matric dance.

“I always used to worry about how I’d fit into my matric farewell dress. Now I have a beautiful dress and it fits me perfectly.”