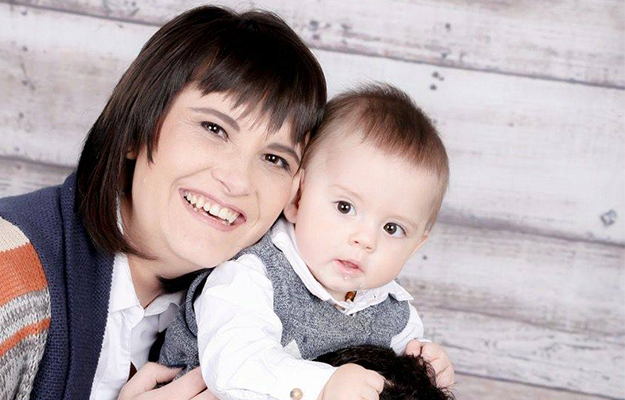 Rechelle Heldsinger couldn’t believe her ears when the doctor told her that she was pregnant.

After suffering from endometriosis since she was 12 years old and trying for a baby with her husband Victor (38) for over seven years, the non-profit organisation founder (33) from Kempton Park, Johannesburg, had given up all hope of becoming a mother.

This is her story: “I was diagnosed with endometriosis at the age of 14 but confirmed diagnosis was at age 17. The doctors told me that I would likely battle to conceive or even conceive at all.

For a young girl who was looking forward to having children in the future, this was devastating news – but I did not allow it to control my life. I was so young and still had my whole life ahead of me. My endometriosis caused me a lot of physical pain.

I met my husband in 2009. For some reason both of us just knew that we were meant to be. He was the first guy who has stood by me through the years with fighting this devastating and painful disease.

He had to do so much research and not once did he turn his back on me. We got engaged in Aug 2009, and immediately started trying to conceive because we just didn't know what would happen in the future.

During the first few months nothing happened but we weren't too worried about it. In February 2010 we got married and moved to another town. It had now been six months since we started trying and it seemed like everyone around us were just falling pregnant so easily.

In the next seven years, my husband supported me through five surgeries. He had to wash my hair, blow dry it, help me around the house. I used to fall asleep with his hand on my tummy because I always say he has magic hands and it helped with the pain. Almost seven years had passed and still we weren't able to conceive.

I was diagnosed with stage-four endometriosis and also have a low AMH level [Anti-Mullerian Hormone is a hormone secreted by cells in developing egg sacs]. Walking the road of infertility was not easy at all. We have met wonderful doctors through the years but also those not-so-wonderful doctors.

We were told the only way we might conceive is through IVF but we were told that the first three rounds of artificial insemination usually fail. Out of desperation, we finally decided to do our first round of IVF end of 2014. It was such an experience. All those injections are really fun (sarcastic).

My hormones were all over the place but we kept at it. The IVF failed and we were devastated. Our hearts were broken. So, we decided that for now that was it. It's just so expensive. In August 2015 I had my ninth surgery for endometriosis. My specialist after that gave us six months to try naturally and we did. But we decided we’re not going to put pressure on ourselves this time.

No calendars, no watching out for ovulation signs... nothing. In February 2016 I started complaining about pain in my uterus. It was really so painful that I ended up going to the ER.

I was given some pain medication. A scan was done but nothing was picked up. So, I went home without answers. My specialist squeezed me in to see him on the 23 February 2016.

He did a scan and exclaimed: ‘Wow your endometrium is very thick.’ He asked when my last period was. It was only then that I realised that I was already a day late... but I did not pay much attention to it all because it has happened before. He ordered a blood tests and all I could think was, ‘Why waste the time?’ We have been through all before. An hour later he tried to phone but I missed the call.

My doctor sent me a message saying that he couldn’t share the news with me if he couldn’t get hold of me. My heart just started pounding and I phoned him back immediately. I will probably never ever forget what happened next. ‘You are pregnant,’ he said. At first I thought I had heard wrong.

He said it again and I just burst out in tears. For seven years, I’d been praying to hear those words.

My pregnancy was quite difficult but I never complained. It was such an amazing journey.

On 21 October 2016 my baby boy was born via C-section. We were all in awe when my doctor showed us that our miracle baby had a knot in his umbilical cord.

The scary part is that our little miracle could have died at any time during our pregnancy, but God protected this little boy. He is indeed one big miracle.

It has been such an amazing journey so far, till now I still can't believe that I'm a mommy.”

This story was submitted to YOU by one of our readers and has been minimally edited. Do you have an incredible story or heart-breaking obstacle you were forced to overcome, to tell? E-mail Pam.magwaza@you.co.za.