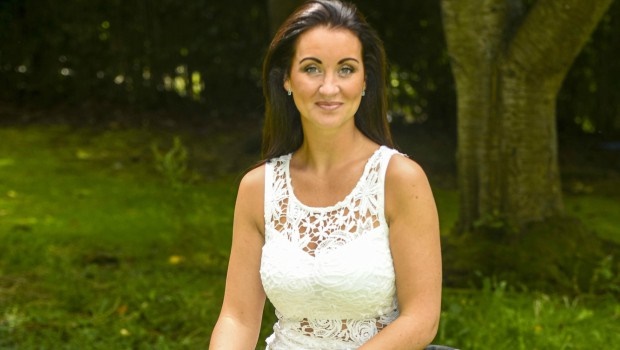 She suffered a spinal stroke and thought she’d never walk again – nevermind find love. But the divorced mom-of-four has defied medical odds and she’s ready to face the world with heart-shaped eyes.

Riona Kelly (37) was left paralysed from her waist down after she suffered a devastating stroke. “After the first five days I spent in hospital, I was told it would take me six months to a year to recover,” she remembers.

But that wasn’t the only shattering news Riona, from Halifax, West Yorkshire in England, had to digest. “Not only did I have to deal with paralysis but I had to deal with losing my partner of 14 years.”

Riona says her husband, Richard, left her and abandoned the rest of the family while she was in hospital. “After he asked me for a divorce I was left completely alone.” She says she felt like giving up but knew she had to be strong for her children, Leighanra (16), Caleb (11), Izabela (9) and Logan (5).

Riona recalls the day her life changed forever in March 2015. “I was at home one day with Logan, I can’t remember exactly what happened but I fell down a flight of stairs and Logan had to call for help.”

She was rushed to hospital where it was found she’d suffered a spinal stroke and had lost complete function of her legs. Riona was told that within six weeks she’d be able to take her first steps.

But six weeks came and went and Riona was still unable to move her legs. “It was at this point that doctors told me I’d never walk again.

“I’d had a car accident 18 months prior to the incident and they said that could’ve caused problems in my spine. But other than that I was a fit and healthy woman and there was no other reason why this would happen.”

But Riona was determined and after spending hours in physio, she miraculously took her first steps on the parallel bar – just two weeks after doctors assumed she’d never walk again. “I was dragging my body and I had no feeling in my legs but I didn’t care, I was walking and that’s all that mattered. My consultant was very emotional. He couldn’t believe I’d done it with the help of a standing frame.”

“When I finally took my first steps it felt amazing!”

It was this milestone in her recovery that would eventually lead her to unexpectedly find love. “I put a post on Facebook last January looking for a personal trainer to help me and some friends suggested that I get in touch with Keith.

“After our sessions, Keith and I stayed in contact. He’d ask me how I was getting on and our relationship blossomed from there. We’ve now been together for 11 months. The children really like him and I finally feel like I’m living the life I deserve.”

She adds that the romance she’s found was similar to hitting the jackpot. “I just couldn’t believe a gorgeous rugby player wanted to date a disabled woman like me.”

But the couple’s love is something that stretches further than just what meets the eye. “Keith says I inspire him, but he encourages me every day and understands and sees the pain that I’m in. He has been amazing with me and the children and I love him more each and every day.”

Read more on:
stroke
LATEST YOU