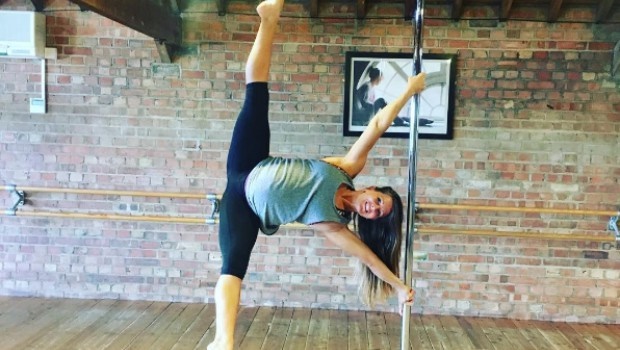 She effortlessly manoeuvres her way around a pole while being a whopping seven months pregnant.

Charlotte Robertson from Wiltshire in England conducts pole-dancing workshops all over the world and has performed on stage at the renowned Pole World Festival – all while being 30 weeks pregnant with her first child.

The mother-to-be, who competed in gymnastics at an elite level when she was young, decided to try out pole-dancing six years ago and has been hooked ever since. So much so that she decided to study to become a qualified pole-dance instructor and soon started competing nationally.

“Pole-dancing allows me to get back to my gymnastics roots and I find it really fulfilling, for both my competitive and training needs,” says Charlotte.

Errmmm so apparently inverting just got harder ????The thing with being pregnant is that what your able to do literally changes all the time & for the first time in my life my body is not my own anymore...it is a tiny humans house and apparently that house doesn't like lifting my butt up in the air ?? anyway after giggling at my lack of being able to chopper anymore I love this little combo from @leahrosepole workshops at the Summer Pole & Aerial Bootcamp ?? such an amazing day with an amazing group! Can't wait to do it all again with my private retreat day for my @livelovebend online students tomorrow ?? #29weekspregnant

The 29-year-old says that when she discovered she was pregnant there wasn’t a doubt in her mind she’d carry on swinging her way around a pole.

But then during a routine pregnancy scan doctors told her and her partner, Luke (34), they’d be conducting additional tests to determine whether their child had Down syndrome.

“I was very careful. Nothing exercise-wise will harm the baby, so the tests were nothing to do with that,” she says.

Handstands are good for the soul ?? Happy Fri-yay everyone ??

After receiving the all-clear from doctors a few weeks later she decided to jump back on the pole – but says her baby bump does get in the way from time to time.

The brunette beauty hasn’t received any negative reactions from online trolls but is fully aware of the discussion surrounding working out while expecting.

“It’s all about what’s relative and works for you. If someone came to one of my classes pregnant who’d never done pole-dancing before, I’d tell them not to,” she says.