Should you stretch before exercise or have a hot bath after a workout? We debunk these 10 fitness myths Some fitness myths are so persistent, they’ve practically been passed down through the generations. (PHOTO: GALLO IMAGES / GETTY IMAGES)

Many of the things we believe about exercise have been proven to be untrue – or were never fact in the first place! Check out these myths – and why they’ve been blown out of the water.

Not if you’re female. That’s the latest finding from experts at Chicago’s Northwestern University. They claim the figure used by exercisers around the world to determine how hard they should exercise is too high for many women. “That can lead to them cutting workouts short or just feeling very unmotivated as they have to work harder than they can manage,” says Dr Martha Gulati, who came up with a new formula.

The maximum female heart rate is now calculated by subtracting 88% of your age from 206 – that means a woman aged 32 has a maximum rate of about 178bpm. You should then aim to workout at between 65 and 85% of that.

2 You need a hot bath after a tough workout

It might feel great, but cold water will more effectively reduce pain the next day, says physiotherapist Jeremy Ingram, one of the co-authors of an Australian study on the subject that appeared in the Journal of Science and Medicine in Sport.

“Most muscle pain is caused by inflammation and heat increases this,” he says. Ideally, he suggests immersing your whole body in cold water (10°C to 12°C is optimum) for 10 to 15 minutes. Static stretching, where you hold a muscle still, seems to decrease flexibility for about an hour. (PHOTO: GALLO IMAGES / GETTY IMAGES)

3 You should always do cardio before a weight session

Not if you want to burn maximum body fat. Experts at The University of Tokyo found people who did strength work 20 minutes before cycling burnt 10% more fat during the aerobic bit of their workout than those who cycled then lifted weights.

Theory has it that lifting weights generates hormones that help release fat from body stores.

4 You have to stretch before exercise

No, no and no! Physiotherapy lecturer Kieran O’Sullivan from Ireland’s University of Limerick has found it may reduce how hard you can exercise. “Static stretching, where you hold a muscle still, seems to decrease flexibility for about an hour after you do it,” he says.

“It’s as if the muscle wants to protect itself from damage and so it tightens. That stops you from jumping as high or running as fast as you could.” Instead, do a dynamic warmup, where you jog steadily for a few minutes, then do a gentle version of whatever moves you’ll be doing during your workout.

JOIN US FOR THE ULTIMATE WORKOUT PARTY!
If you want more on getting fit and shedding excess kilos in a healthy, sustainable way then join us for SA’s biggest fitness party on 13 Aug in JHB or 23 Oct in CT. Get your ticket here.

5 Protein is the best thing to eat after a workout

Maybe if you’re a man. Past research from New Zealand’s Massey University found men who eat protein after a workout performed more than 4% better the next day than those who ate only carbs.

But the researcher in charge of that trial, Professor David Rowlands, has now repeated the study on women and found female exercisers showed no benefit from protein in subsequent performance compared to women who were given carbs. What this means is that if you feel like a muffin after your session rather than an egg white omelette, it won’t hurt.

Bear in mind, though, it’s a lot quicker to eat kilojoules than burn them – the idea that exercise means you can eat whatever you want is another myth that needs busting. Logic says this should be true – after all, you’re covering the same distance so surely kilojoule expenditure should be similar.

But researchers at Syracuse University in New York found that because of the extra muscles used when running, a whopping 30% more kilojoules were burned over the same distance. Try to incorporate run intervals into your walk to maximise kilojoule burn.

7 Only cardiovascular exercise helps your heart

Actually, research from Harvard University has found that strength training for 30 minutes or more a week also decreases heart disease risk – by 23%, in fact. “Any exercise that raises circulation is going to have some benefit to the heart,” explains Professor Steve Selig, national director of Exercise & Sports Science Australia.

“And for novice exercisers there’s a big crossover of aerobic and strength benefits in either type of exercise.” The fitter you get, though, the less that crossover occurs, so if you want maximum heart-health results from a strength plan, Selig suggests fine-tuning your resistance routine to enhance its aerobic potential.

This means using light weights and doing more repetitions and organising moves into a continuous circuit so you work a different body part between sets rather than resting completely. 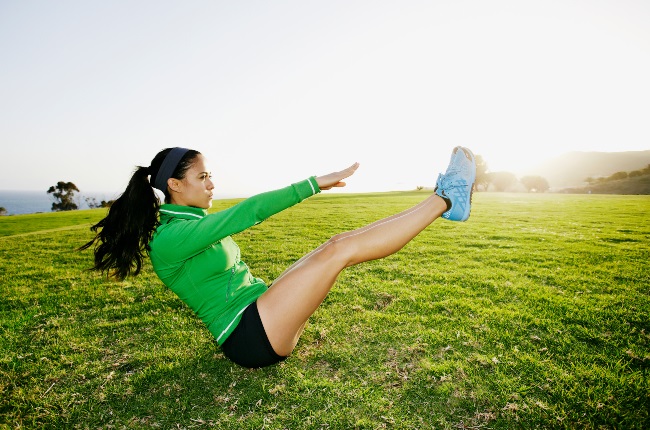 Not according to Dr Craig Richards from The University of Newcastle. He’s discovered that there’s little actual research into how wearing super-high-tech sports shoes translates into lowered risk of injury.

9 Weak knees are the major cause of running injuries

Actually, it’s more likely to be your hips, says Dr Reed Ferber of Canada’s University of Calgary. “Ninety percent of runners with an injury have weak muscles on the outside of their hips,” he says. “These muscles control how quickly or far the knee collapses inwards as you run. If they’re weak, the knee goes too far.”

The movement of the knee also affects foot pronation and so it can also be linked to plantar fasciitis, shin splints and Achilles problems. Check if your hips are weak by doing a single leg squat by standing straight then lifting one leg off the floor. Now squat down as if you were going to sit on a chair. If, as you do this, the knee on the side with the foot on the floor dips inwards, there’s an issue. It’s now being shown that our genes determine how well we respond to exercise. Research from the US has found some people are simply “low responders” to fitness.

In other words, they’ll have to train super hard to get noticeably fitter or stronger (as the genes involved don’t switch on the right processes in the body). Don’t hang up your trainers, though, as regular exercise will still help to lower cholesterol even if fitness doesn’t improve – plus exercise has positive mental health benefits such as reduced stress that genes can’t defeat.

THE MYTHS THAT JUST WON’T DIE

Some myths are so persistent, they’ve practically been passed down through the generations. So, here are the facts, once and for all . . .

We live in a world where facts and fiction get blurred
In times of uncertainty you need journalism you can trust. For 14 free days, you can have access to a world of in-depth analyses, investigative journalism, top opinions and a range of features. Journalism strengthens democracy. Invest in the future today. Thereafter you will be billed R75 per month. You can cancel anytime and if you cancel within 14 days you won't be billed.
Subscribe to News24
Related Links
YOUR MONEY | What to know about risk-insurance cover
What to say when your teenager experiences heartache
THE BIG READ | How Joe Wicks overcame his traumatic childhood to become the world's most popular...
Next on You
Career advice: Your expert guide to getting ahead with networking know-how

Read more on:
fitnessadvicetrainingexercise and healthlifestyle