To booze or not to booze: why millennials are choosing sobriety Many South Africans are choosing to ditch the booze more often than not. (PHOTO: Gallo Images/Getty Images)

A bit of wine here, an ice-cold beer there, some bubbly to ring in the new year, a cocktail to keep feeling merry.

The festive season sure does create plenty of opportunities to tap into the tipple.

But come the start of the year many of us are reaching for something cleansing and testing the Dry January waters.

For a month we swear to steer clear of the booze – but by February many of us are back at it again.

Yet a rising trend may be changing that.

Sober curiosity is being driven by health-conscious youngsters and more people are starting to follow the trend as mocktails and non-alcoholic drinks become more available in stores and restaurants.

British journalist Ruby Warrington first popularised the term in 2017 in her book, Sober Curious, which explores what life would be like without alcohol or by having a more mindful relationship with it.

She described her day-to-day routine as “going to the work event where there was nasty, cheap white wine and knocking it back”, or “putting the kids in bed after a busy day and cracking a bottle open.

“It’s the drinking you do without really thinking about it.”

Mindful drinking, by contrast, she says, means “bringing awareness to your behaviours in terms of your decision to drink alcohol”. 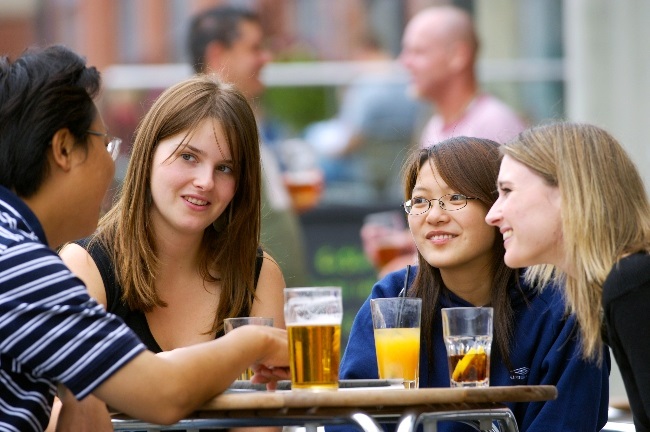 Many are consciously opting to refrain from drinking alcohol even in social settings where others are indulging. (PHOTO: Gallo Images/Getty Images)

Many South Africans also became more interested in the idea after the initial hard lockdown in March 2020 resulted in people running out of booze due to alcohol sale restrictions.

Enforced sobriety made many realise they were okay without indulging all the time.

“Sober curiosity is often defined as having the option to question or to change your drinking habits for mental or physical health-focused reasons,” says Oliver Wills, marketing lead for Swinkels Family Brewers, the local distributors of Bavaria 0.0% Beer.

“The movement is about being interested in sobriety, but this can mean different things to different people, depending on their needs.”

For many people, being sober curious doesn’t mean giving up drinking entirely, but instead, quitting drinking for just a few weeks, or cutting back on how much they drink.

South Africans are among the heaviest drinkers in the world, according to the World Health Organisation, and 20% of us will succumb to alcohol addiction, says Janet Gourand, the founder of SA-based health and wellness social enterprise Tribe Sober.

“Many people start drinking in their late teens and then just continue until it becomes a deeply entrenched habit. A lot of people drink more than the ‘low risk limit’ of alcohol, which is 1,5 bottles of wine a week, or six beers a week,” she adds.

Janet, a sobriety advocate and a recovery coach from Cape Town, says that even if alcohol doesn’t destroy our lives, it can prevent us from reaching our potential.

“It robs us of our time, energy and motivation. Getting sober curious for a few weeks or months enables us to regain our health and energy and reconnect with our true selves.” Many young people are whipping up health drinks instead of boozy cocktails. (PHOTO: Gallo Images/Getty Images)

“Alcohol is linked to seven different types of cancer and diseases for people aged 60-plus. Most women are aware that drinking more than three small glasses of wine a week raises their risk of breast cancer by 15%,” she says.

“Young people are drinking a lot less than their parents did at their age. They are more health-conscious and heavy drinking doesn’t fit with the current wellness trend.

“The hashtag #sobercurious has taken Instagram by storm and TikTok also has a huge sobriety community.”

Janet adds that many millennials – those born between 1981 and 1996 – prefer not to drink, which, in turn, has sparked a trend of sober bars popping up all around the world, along with a growing selection of alcohol-free drinks.

“In a culture where alcohol has long been promoted as the most socially acceptable way to celebrate or relax, there’s certainly benefits to questioning the status quo,” says psychiatrist Dr Elie Aoun at New York University.

“It creates awareness among people who don’t have an Aud (alcohol use disorder) that alcohol isn’t beneficial, and that it could be harmful.”

READ MORE | Bye bye booze! Here’s why giving up alcohol could be the best decision you make this year

There are many benefits to being sober curious, says Rhys Evans, managing director of drug and alcohol testing equipment supplier Alco-Safe.

One of them, he says, is being able to make educated decisions on whether to drink and being okay with your decision.

“It teaches people to understand how alcohol affects their bodies, their finances, performance and relationships. Once you have that knowledge then you can make an educated decision if you want to stop drinking, or only drink in certain situations,” he says.

This, he says, is important in a context with a drinking culture like South Africa, where choosing not to drink might be perceived by others as though something is wrong.

Oliver agrees and adds that “being sober curious starts with asking yourself why you choose to pick up a drink.

“Drinking is usually something we do without thinking about it, even though we know it’s causing minor issues such as headaches, restless sleep and hangovers, and major issues such disease and relationship problems.

“It’s a good thing to be curious about life and ponder alternative choices.” Stopping or slowing down drinking can help reinvigorate your body, Janet says. “For example, your blood pressure and liver stiffness will decrease.

“Drinking alcohol is like pouring petrol on your anxiety, and without it, you’ll feel calmer and more in control.

“Your sleep will improve. If you’ve been drinking for years, then you’ll have built up a level of fatigue – just taking a month off will enable you to get some good quality sleep so that you can rest and recharge.”

Sober curiosity, however, isn’t for everyone, cautions Janet, especially not people who are addicts.

'It’s very hard to change your drinking habits on your own, so you do need a community of others on the same path.'
Janet Gourand

If a person tries, and fails to moderate their alcohol intake, it’s an indication that they’ve crossed a line with alcohol and are unable to turn back.

In this case it would be better to seek help in the form of support groups such as Alcoholics Anonymous and others.

“It’s very hard to change your drinking habits on your own, so you do need a community of others on the same path,” Janet says.

“Once you’ve found the right group, you’ll be able to learn how to quit and then to thrive in your alcohol-free life.”

It’s important to be aware of the difference between being sober curious and being in recovery from alcoholism, Rhys says.

“People who are in recovery choose to be sober, but they do so because of their extreme alcohol dependency or abuse, and they have no other option.”

A sober curious person on the other hand may start to see signs of abuse and consciously decide not to indulge before things get out of hand or they just want to take better care of their health.

We live in a world where facts and fiction get blurred
In times of uncertainty you need journalism you can trust. For 14 free days, you can have access to a world of in-depth analyses, investigative journalism, top opinions and a range of features. Journalism strengthens democracy. Invest in the future today. Thereafter you will be billed R75 per month. You can cancel anytime and if you cancel within 14 days you won't be billed.
Subscribe to News24
Next on You
It's the year of quiet thriving – here's how to make it work for you