On 15 October, Kensington Palace announced that Meghan and her husband, Prince Harry, were expecting their first child together.

At the time, Meghan was reportedly 12 weeks pregnant and had just landed in Australia on a two-week tour of Oz, New Zealand, Fiji and the Kingdom of Tonga.

Now with only weeks left until they welcome an adorable royal baby, we look at the eight times Meghan totally nailed her pregnancy style.

Like her sister-in-law, Kate, before her, Meghan has adopted an approach to maternity dressing that's true to her personality – and incredibly chic.

The duchess has stepped out wearing everything from simple sheath dresses from British online retailer Asos to bespoke Givenchy.

Take a look at a few of her standout fashion moments:

When she wore a short black pleated dress with a white blazer while visiting the Andalusian Gardens during her trip to Morocco. Meghan wore a blue patterned dress when she and Harry visited King Mohammed VI of Morocco at his residence on 25 February in Rabat. Looking like a vision of perfection, Meghan donned an all-white outfit with suede green accessories while attending a gala performance at the Natural History Museum in London. 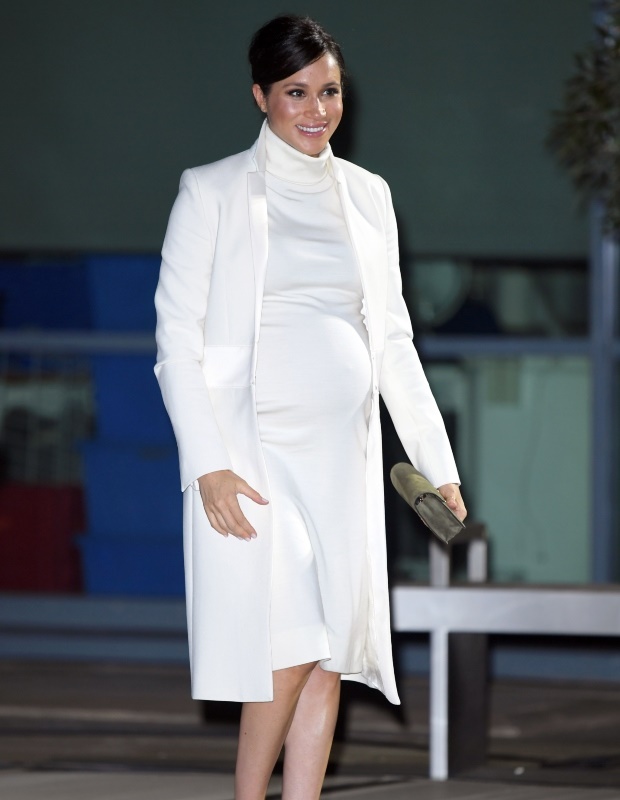 Meghan made an appearance at the British Fashion Council's annual Fashion Awards to present Givenchy designer Clare Waight Keller with an award. She donned a sleek one-shoulder black dress which accentuated her blossoming belly perfectly. She wore a pale-pink Brandon Maxwell dress with a coordinating blazer and white strappy heels to the National Theatre in London just after she was announced as the venue's patron. 6. Laid back in floral

The duke and duchess visited One25 Charity, an organisation supporting sex workers in Bristol, England. She donned thigh-high olive boots with a long floral dress, which gave us minimalist chic. Meghan wore a blue shirtdress with baby-blue heels on 26 October in Nuku'alofa, Tonga. Although this stayed true to her minimalist style, it was still incredibly chic. For the Endeavour Fund Awards on 7 February, the duchess donned a black-and-white ensemble, which boasted a flattering slit. Her look was perfectly finished off with glowing and bronzed skin and pretty pink lips. We live in a world where facts and fiction get blurred
In times of uncertainty you need journalism you can trust. For 14 free days, you can have access to a world of in-depth analyses, investigative journalism, top opinions and a range of features. Journalism strengthens democracy. Invest in the future today. Thereafter you will be billed R75 per month. You can cancel anytime and if you cancel within 14 days you won't be billed.
Subscribe to News24
Related Links
Meghan Markle handed out luxury beauty bags at her baby shower to lucky friends
Even Meghan Markle and Beyoncé have already worn cow print - the latest major fashion trend...
Is this what Meghan Markle wore to her baby shower in New York?
Next on You
Do you believe in soulmates? Here's how your answer could be affecting your relationship