The understated yet stunning gown was designed by Givenchy and was rounded off with a veil that featured flower embroidery to represent all the Commonwealth nations.

We take a look at how the royal brides’ dresses have changed over the last century.

According to TIME, Queen Victoria is thought to have started the tradition of brides wearing white on their wedding day.

But her reason for doing so wasn’t to symbolise purity. Queen Victoria donned a white gown to show off the lace on her dress, which was made of silk and satin.

The queen, who was marrying Prince Albert, demanded no one else wear white to her wedding and had the pattern of her wedding dress destroyed afterwards so it wouldn’t be replicated. The dress was designed by Madame Handley Seymour, a former court dressmaker for Queen Mary.

Her head was covered in a Juliet lace cap because tiaras weren’t common back then. The twice-divorced American socialite, whose marriage to Edward, Duke of Windsor, caused quite a scandal, donned a silk crepe dress by Mainbocher.

The bride wore a Caroline Reboux hat instead of a veil.

Edward abdicated to marry his Wallis forcing his brother, Albert (later King George VI), to take over the throne. When the queen and Prince Phillip married, World War II had just ended two years earlier, which meant she had to purchase the material for her dress using coupons.

The dress, which featured silk from China, was designed by Norman Hartnell and had 10 000 seed pearls sewn into the floral design.

Her something-borrowed was the silver, diamond and gold tiara she paired with her veil. The Fringe Tiara belonged to Queen Mary and the queen borrowed it from her mother, Queen Elizabeth I. It broke the morning of the wedding and had to be hastily repaired by a jeweller before the ceremony.

Her satin shoes were created by Edward Rayne. Her veil was complemented with a Poltimore tiara. The queen’s only daughter wed her first husband, Captain Mark Phillips in a high-neck gown with dramatic trumpet sleeves by Maureen Baker of Susan Small.

Her veil was held in place by the same tiara her mother had worn on her wedding day. Her wedding dress with its puffed-sleeves and seven-metre train remains one of the most iconic wedding looks in history. It was designed by the then husband and wife duo David and Elizabeth Emanuel.

Her something old was a piece of Queen Mary’s lace, which she incorporated into the ivory silk material of the dress.

The something new was the dress itself and something blue was a small bow sewn into the waist of her dress.

Her sparkly tiara served as something borrowed – it has belonged to her family since the 18th century. The couple later divorced in 1996. Sophie, Countess of Wessex married in 1999

Her dress was designed by Samantha Shaw and featured 325 000 crystals and pearls.

Her tiara was from the queen’s private collection. The black and white pearl necklace and earrings she wore were designed by her husband as a wedding gift. The jewellery and tiara were made by Asprey and Garrard. Camilla, Duchess of Cornwall – married in 2005

Prince Charles married his second wife, Camilla Parker-Bowles, in 2005. She wore an embroidered pale blue and gold coat over a matching chiffon gown. It was designed by Robinson Valentine.

Her gold feathered hat was created by Philip Treacy. 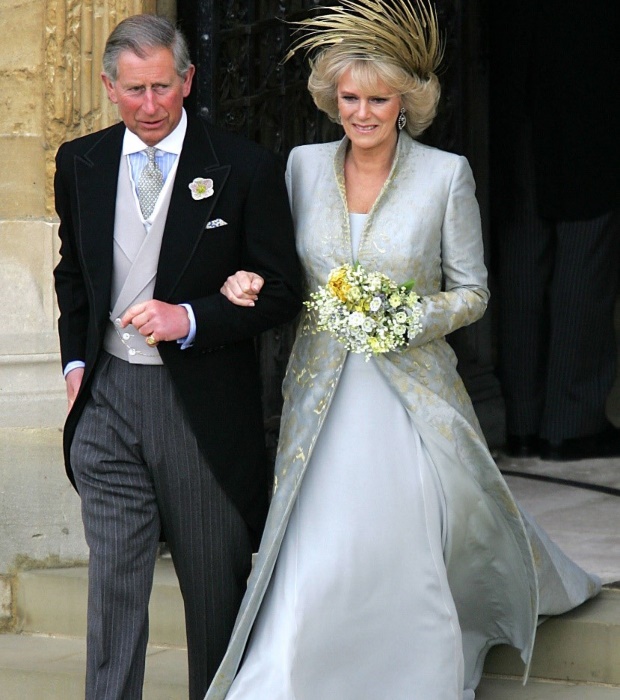 Catherine, Duchess of Cambridge – married in 2011

Her wedding gown was one of the most highly-anticipated dresses in royal wedding history.

In fact, so much hype surrounded Kate Middleton’s wedding dress, even the designer was kept a secret until the day she walked down the aisle with Prince William.

Kate’s dress was designed by Sarah Burton at Alexander McQueen. It had a V-neckline, a train just more than two metres long and a Victorian-inspired corset.