People are being spectacularly stupid while playing Pokémon Go 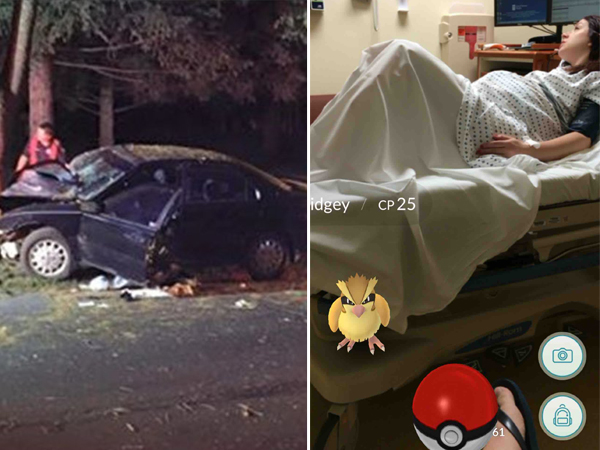 Even thought it's yet to be officially released in South Africa, chances are you've seen some folks who've managed to somehow download a version, wondering around with their phones in the air, oblivious to all else.

It's only available in a few countries, but since it's explosion onto app stores last week, Pokémon Go is officially the biggest mobile game in history.

Clearly, it's addictive. And it's not just for kids. It’s a lot like the 20-year-old Nintendo Pokémon game where you search for things, catch them, train them and then start fights with them. In a nutshell, it's a smart phone app that will require all your attention or frustrate the devil out of you.

With a phone's GPS, the app creates a caricature map of your neighbourhood, wherever you may be. It also makes use of your smart phone’s camera, which means the Pokémon can pop up on your cellphone screen at any time and in any place.

Read more: How to unlock a hidden Chrome game on your smartphone or computer

Oh yes, and only you can see them.

You get a limited number of visual Pokéballs that you must flick on the screen with your finger to catch or trap Pokémon. Sometimes you’re successful and sometimes the rascals refuse to surrender.

In any event, the creatures -- particularly the rare ones -- are proving to be quite elusive. Which is driving die-hards to do insane things to catch them.

“Pokémon users will have all sorts of accidents as they use the program while walking, biking, driving, etc.”

Read more: Video games can have benefits, but… This was proved by a New York driver, who was reportedly playing Pokémon Go while driving. He ploughed into a tree.

A statement from Auburn Police said the driver "admitted to actively playing the Pokémon Go game while driving causing him to become distracted and run off the roadway into a tree."

He was not seriously injured.

Meanwhile, in California, the San Diego Union-Tribune reports two men playing the game had to be rescued after falling off a 90-foot (27 m) ocean cliff.

On the opposite end of the spectrum, criminals are taking advantage of the game's siren call.

Like the four teenagers in St Louis in the US who used the game’s "lure" mode, which allows you to draw both Pokémon and players to your location, to stage up to 11 robberies before finally getting caught.

There's also a sketchy report of a 21-year-old from America who was wondering the streets playing the game in the early hours of the morning, when he was attacked by mysterious a knife-wielding man.

"I saw him go by and asked if he was playing Pokémon Go. He was like 'what?' I guess he wanted to battle because he came up at me with a knife," one Michael Baker told KPTV.

Stabbed and bleeding, he did what every Pokemon trainer would do. He kept playing. "I basically risked my life," he said. If that weren't enough, here are some social media gems from the geniuses playing the game around the world. We'll just leave these here...

I want this Squirtle but I have to trespass in my neighbour's backyard. Hmm... #PokemonGO — Frank Li (@Chief_Sangy) July 6, 2016

Oh god, this guy has a rock type between his legs...#PokemonGo pic.twitter.com/tTlZQZ4Pxe — Chris Jones (@ChrisJonesGeek) July 15, 2016

This is the first time I've been outside in 5 years #PokemonGO pic.twitter.com/TcbB5jrflG — amber discko (@amberdiscko) July 10, 2016