WATCH: Young SA athlete refuses to give up hope 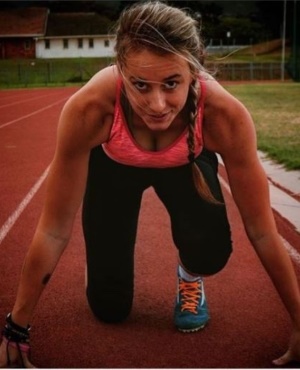 Cape Town - She has to take 16 pills a day – but there’s no way Nadia Samuels will let her illness get in the way of her dream of competing in the 2020 Olympics.

The 21-year-old athletics champ is determined to keep training, in spite of the fact that she was recently diagnosed with Anti-N-Methyl-D-aspartate (Anti-NMDA) receptor encephalitis, a type of brain inflammation.

When she was diagnosed in 2017, doctors told her she couldn’t continue being an athlete and she had to pursue another passion – but Nadia refused to give up hope.

“I’m going to qualify for the Olympic Games, even if I have to crawl, nobody is able to stop me.”

The young Joburger has dreamt of becoming a professional athlete since she was 13 years old, and for a while, it seemed like she was well on her way.

During her high school years, Nadia was a normal, active teen. She was a provincial athlete and hockey player. She did hip-hop dancing and was part of the first debate team.

But in matric, her world came tumbling down around her when she suffered her first epileptic seizure.

“I was told to leave school and to stop doing athletics to prevent further damage to my brain,” Nadia says.

“That I had to do my matric the following year because I was in and out of hospital doing tests.”

But she refused. She finished matric, keeping up her training as much as she could.

“At 19 I was admitted to ICU where I had a seizure in the shower but still there was no diagnosis. I was sent home with a box of prescription pills.

“People told me over and over, ‘Nadia, you have to take it easy, and you cannot get your hopes up with the Olympic Games.”

Nadia’s health worsened and her seizures came more often. But still doctors couldn’t figure out why.

“The doctors blamed bipolar disorder and stress because there was no other explanation for it. I was in and out of hospitals, different doctors in Joburg and Cape Town.

“Neurologists, neurosurgeons, psychologists all made a different diagnosis, and no one found a cure.”

Eventually, Nadia agreed to take a break from athletics and didn’t train for eight months.

It didn’t help. In July 2017 she had to be admitted the Glynnwood Hospital in Benoni, east of Johannesburg, where Dr Igshan Martinus diagnosed her with Anti-N-Methyl-D-aspartate receptor encephalitis.

“I was connected to so many machines and I lay there for days,” she recalls. “My life seemed to be falling apart.

“I kept getting seizures. There were days where I wished I didn’t wake up the next morning. Life kept throwing all these obstacles in my way, which made it impossible to focus on my Olympic dream.”

In January this year, she had three seizures in one day. She lost her vision for several seconds and had to be monitored 24/7.

Dr James Thomas Butler, a neurosurgeon, and Dr Johan Keyter, a neurologist, diagnosed her with further brain damage and a weakened heart.

She knew this would only make the road ahead harder. But she has the support of her mom, Elmarie, dad, Jacques, 18-year-old brother Dylan, and coach Roscoe Engel, also a South African athlete.

“My eyes are set on 2020, I train four to six hours every day because if Olympics was easy, everyone would’ve done it.”

“There are probably going to be more hiccups along the way to 2020, but I know I have what it takes, and I’d rather die doing what I love than live with regrets.”

We live in a world where facts and fiction get blurred
In times of uncertainty you need journalism you can trust. For only R75 per month, you have access to a world of in-depth analyses, investigative journalism, top opinions and a range of features. Journalism strengthens democracy. Invest in the future today.
Subscribe to News24
Related Links
SA sprinter Adams hungry for more medals
Mbuthuma pursues lifelong dream despite pain
Next on You
How to cope with car sickness on your long-weekend road trip

Read more on:
2020 olympicsathletics
LATEST YOU