Kim and Kanye are reportedly "getting along well" as the rapper continues to pursue his romance with Irina Shayk. (PHOTO: GALLO IMAGES / GETTY IMAGES)

They may be going through one of the biggest divorces of the year, but it seems Kim Kardashian (40) is still in her ex Kanye West’s corner.

The reality show star recently attended a listening event for her estranged husband’s latest album, Donda, at the Mercedes-Benz Stadium in Atlanta, taking the couple’s kids, North (8), Saint (5), Chicago (3) and Psalm (2), along.

She was spotted rocking an all-red outfit, matching Kanye who also wore the same colour for his show.

And supermodel Irina Shayk, Kanye’s supposed girlfriend? Well, she was nowhere to be seen – just weeks after her and Ye’s romantic trip to France to celebrate his 44th birthday.

There’s been much speculation now that things may be cooling off between the pair – although a source told People magazine that they’re still “very much dating”.

"Irina is so upset at the lies about her and Kanye," the insider says. "They had a great trip to France and they will date long distance. Kanye will continue to be mostly Los Angeles-based while Irina lives in New York. He has no plans to move.” 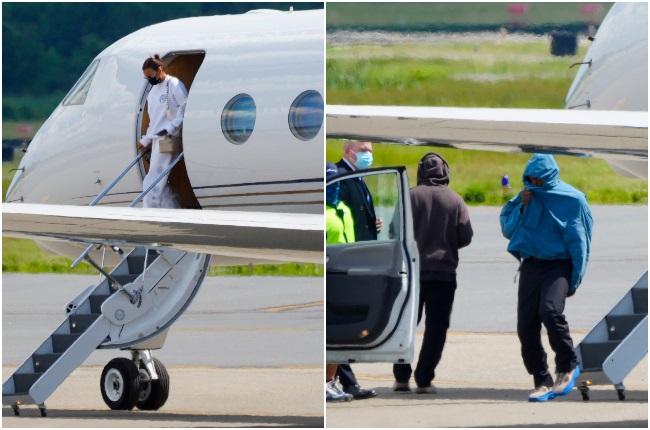 The pair were spotted in comfy sweats as they touched down at New Jersey’s Teterboro Airport after their French getaway in June for Ye's birthday. (PHOTO: MAGAZINEFEATURES.CO.ZA)

Meanwhile Kim, who’s been enjoying time out with friends in New York and continues to grow her underwear business Skims, is all about keeping it amicable. “Kim is fine with Kanye dating,” another source says. "She just wants him to be happy."

The exes are also very much on the same page when it comes to their family. They recently headed to San Francisco with their brood for a family holiday and enjoyed a private excursion to the Asian Art Museum. San Fran is where Kanye proposed to Kim in October 2013.

“It was their first public outing together as a family since the split,” a source told Page Six. “It reconfirms they are in step when it comes to co-parenting and putting their kids first.”

Kim recently told talk show host Andy Cohen, who hosted the reunion special of Keeping Up with the Kardashians, that Kanye was her friend “first and foremost for a long time”.

“So I can’t see that going away,” she said. “I will forever be Kanye’s biggest fan. He’s the father of my kids. Kanye will always be family.”

We live in a world where facts and fiction get blurred
In times of uncertainty you need journalism you can trust. For only R75 per month, you have access to a world of in-depth analyses, investigative journalism, top opinions and a range of features. Journalism strengthens democracy. Invest in the future today.
Subscribe to News24
Related Links
Kim Kardashian upset about reliving Kanye West divorce drama on TV as she hints at what caused...
20 seasons, 1 famous family: a look back at the incredible Kardashian phenomenon
THE BIG READ: Inside the chaotic world of Kanye West
Next on You
The clashes that led to Grimes and Elon Musk calling it quits on their 3-year relationship