Back together? Trevor Noah in high spirits as he steps out with Minka Kelly in New York Trevor Noah and Minka Kelly weren't being shy about their rekindled romance relationship while out and about in New York over the weekend. (PHOTO: The Image Direct / Magazine Features)

Trevor Noah could be back with Minka Kelly — and by the looks of it he’s pretty happy about it.

The Daily Show host looked thrilled to be spending time with the actress, flashing a huge smile when they were spotted out and about in New York over the weekend.

The Johannesburg-born star kept things casual for the sunny afternoon in the Big Apple, sporting a white T-shirt and sporty shorts while the Friday Night Lights star glowed in a flowy orange sundress.

The couple briefly stopped to chat with someone outside the Blackstone Coffee Roasters in Greenwich Village before continuing their walk around the city. 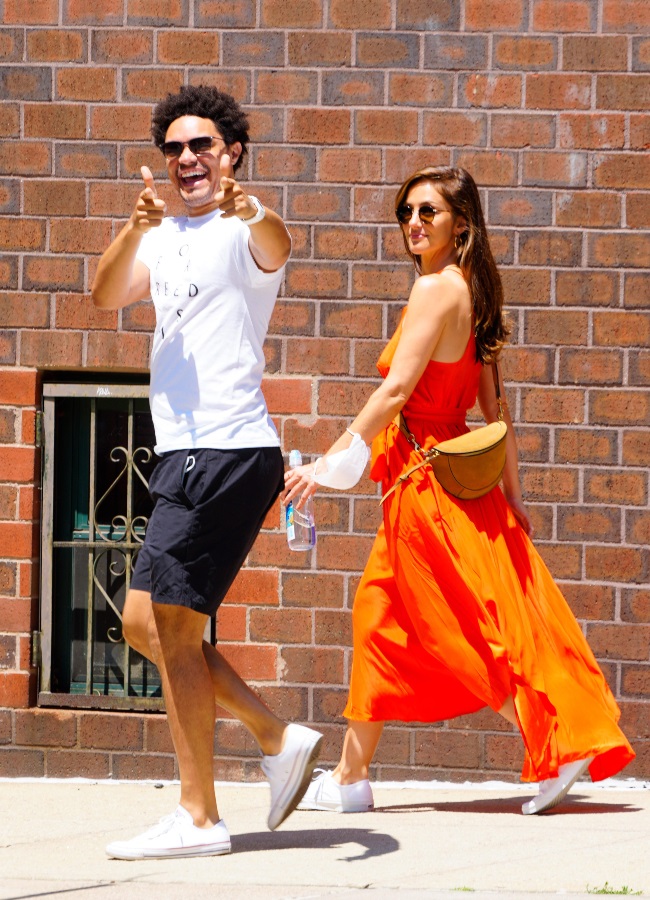 While Trevor kept it casual in shorts and a t-shirt, the Friday Night Lights actress glowed in a flowy orange sundress. (PHOTO: The Image Direct / Magazine Features)

The 37-year-old comedian appeared to be in high spirits and was seen waving at onlookers and getting animated during a conversation on the sidewalk.

This isn’t the first time they’ve been spotted out together since they reportedly split last month.

The pair also enjoyed a post-breakup trip to St Barts to try to reconnect in late May. While on vacation on the Caribbean island, eyewitnesses spotted them kissing and getting cuddly during dinner at a French-Japanese fusion restaurant.

Minka (40) confirmed the getaway when she shared a cheerful Instagram post from what looked to be St Barts, saying she was in her “happy place”. Trevor hammed it up for the cameras while the pair strolled through New York. (PHOTO: The Image Direct / Magazine Features)

According to an insider, Kelly and Noah are still figuring out their future and aren’t  officially back together.

"Trevor and Minka are taking things day by day. They're spending more time together and are both happy. Their feelings for each other never really went away and after taking some space, they realised they missed each other."

The pair first sparked romance rumours in August 2020, and though neither ever publicly confirmed their relationship it was said that they were “very serious”.

Trevor even purchased a $27,5 million (now R371,25m) Bel-Air home for the couple to share in December, and at the time the pair were said to be still really happy and in love. The duo were making their way to get coffee at Blackstone Coffee Roasters in Greenwich Village. (PHOTO: The Image Direct / Magazine Features)

When their breakup was reported in May, insiders shed light on what prompted them to take their break.“

Their work commitments and careers are very different, and they both felt like they should take time apart.”