Brad Pitt and Angelina Jolie attend the premiere of By the Sea at the 2015 AFI Fest. (Photo: Gallo Images/Getty Images)

If you thought the drama between the pair once known as Brangelina had died down, think again.

Angelina has fired a fresh salvo in the long and drawn-out divorce from Brad Pitt – and many are saying it was a low blow.

The actress recently tried to get the private judge who’s been overseeing their divorce dismissed, apparently because he had ties to one of Brad’s businesses.

In legal papers filed earlier this month, she asked that Judge John Ouderkirk be removed from their case, claiming he wasn’t “open enough” about other cases he was hired for involving Brad’s attorney, Anne C Kiley.

But the Once Upon a Time in Hollywood actor was having none it, accusing his ex of trying to stall their divorce proceedings and claiming her actions are only serving to hurt their kids.

“Unfortunately, the individuals hurt most by Jolie's transparently tactical gambit are the parties' own children, who continue to be deprived of a final resolution to these custody issues,” court papers read.

Documents claimed that the Maleficent star had always been aware of the judge’s other cases and “never objected” to them before.

Like many other high-profile couples, they hired a private judge to handle their case to keep its filings sealed and not made public.

Meanwhile the actress is also said to be keen to move to the UK with her kids – which would be another blow for Brad.

She apparently has her sights set on the affluent suburb of Richmond in south-west London where she and Brad once lived in 2011.

“She believes Richmond is a perfect environment for the kids, from a cultural standpoint and educationally,” an insider told the Mirror. 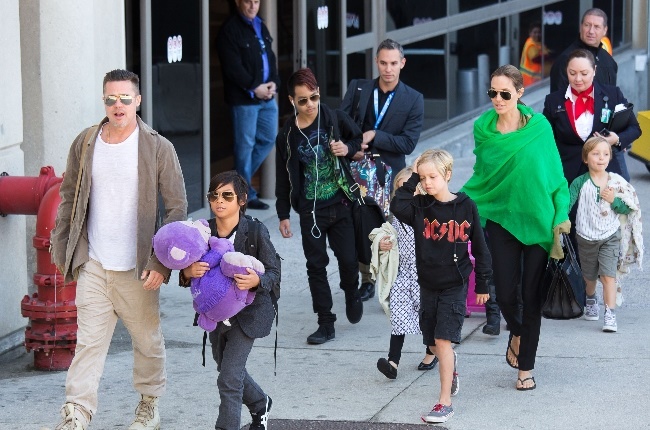 The star has spoken openly in the past about giving her kids, who are currently based in Los Angeles where they divide their time between her and Brad’s homes, a global upbringing.

“I enjoy being out of my element. I want the children to grow up in the world, not just learning about it but living it, having friends around the world.”

We live in a world where facts and fiction get blurred
In times of uncertainty you need journalism you can trust. For 14 free days, you can have access to a world of in-depth analyses, investigative journalism, top opinions and a range of features. Journalism strengthens democracy. Invest in the future today. Thereafter you will be billed R75 per month. You can cancel anytime and if you cancel within 14 days you won't be billed.
Subscribe to News24
Related Links
Brad Pitt reportedly spent two hours visiting Angelina Jolie
Angelina Jolie’s daughter suffers sad loss during lockdown
Angelina Jolie donated R3 million for her 45th birthday – we look back at some of her most...
Next on You
Game of Thrones star Maisie Williams opens up about her abusive childhood and traumatic relationship with her dad