Tragically, our collective TV boyfriend is spoken for.

Regé-Jean Page made a rare public outing with Emily Brown earlier this week at the British GQ Men of the Year Awards and there’s no doubt the two are an item.

Although the 31-year-old Bridgerton heartthrob walked the red carpet alone, the pair held hands as they entered the event at the Tate Modern in London where the event took place. Regé-Jean received GQ’s standout performance of the year award for portraying the Duke of Hastings in the hit Netflix show.

Not much is known about the Zimbabwe-raised star’s low-key love although the Daily Mail has reported that she does commission copy-writing work for companies, including Nike, Converse and Uber. She also plays part-time soccer for FBB, a British charity organisation that uses soccer to educate and enrich the lives of young people. Regé-Jean looked dapper in a forest-green suit embroidered with spirals, while Emily opted for a black suit with a lacy black bralette underneath. (PHOTO: Gallo Images / Getty Images)

Emily, who graduated from The University of Manchester in 2012, has seemingly made moves to keep her life private and has no known Instagram or Twitter page. Her LinkedIn account also appears to have been taken down.

The ultra-private pair were first linked in mid-February when photos of them hugging on the sidewalk in North London surfaced. At the time insiders reported Emily and Regé-Jean had been together for a few years and even bought a house together in February 2020.

Around that time the actor remained coy as he addressed rumours that he was dating his former Bridgerton co-star, Phoebe Dynevor (26).

“I think everything you need to know is on camera. That’s why we presented it so beautifully for you,” he told reporters.

Regé-Jean and Phoebe’s steamy onscreen romance earned the show millions of viewers and fans were devastated when Netflix announced he would not be returning for season 2.

Netflix confirmed the news in April, with the next season set to focus on Lord Anthony Bridgerton (Jonathan Bailey), brother of Daphne Bridgerton (Phoebe), as he attempts to find a wife. 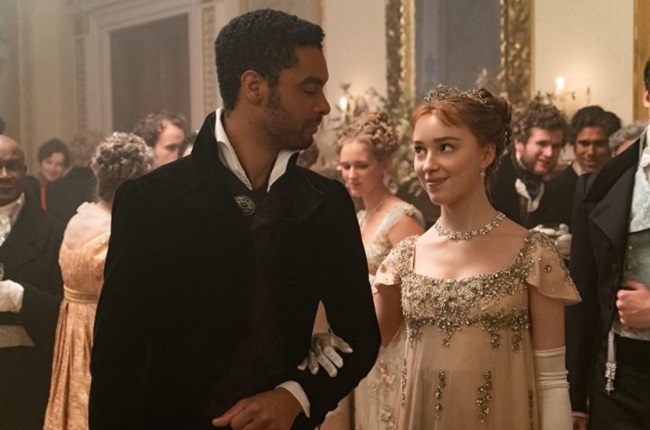 Sources later told Page Six that creative differences were a big factor in the Regé-Jean’s exit.

“He wasn’t happy with what was planned for his character for season 2, which would have kept him a player but not the focal point of the show,” the source said, adding Regé-Jean was inundated with offers for other roles.

One of those roles may very well be as the next 007.

Industry insiders say he is favoured to take over as the next James Bond after Daniel Craig’s fifth outing as the superspy in the upcoming No Time to Die.

“They are talking about Regé, but Bond producers are not making any decisions until after No Time to Die is released,” a source told Page Six. “They are focusing on Daniel Craig’s big finale.”

“It’s literally just a thing for people to talk about. So it’s flattering, but it’s just a game."The star will next be seen on the silver screen in upcoming films The Gray Man and Dungeons & Dragons.