When Brooklyn Beckham first announced his engagement to actress Nicola Peltz in July last year, the biggest talking point wasn’t the fact that they’d been dating for just nine months.

Rather, fans were eager to see just how Nicola’s family – the super-private and super-rich Peltz clan – would get along with the showier, nouveau-riche Beckhams.

And judging by the way the two households came together to support David’s Inter Miami in their season opening match against LA Galaxy recently, things seem to be going swimmingly.

The families looked happy as they snuggled in for a photo, posted by Victoria Beckham to Instagram, where Brooklyn’s mama wished her son’s in-laws-to-be "kisses". Joining Victoria, Brooklyn, Nicola and her parents were three of Nicola's six brothers – Bradley and twins Greg and Zach – as well as the younger Beckhams, Romeo, Cruz, and Harper. (CREDIT: Instagram / @victoriabeckham) The 26-year-old actress bears a striking resemblance to her model mother Claudia who sported a similar hairstyle and also framed her face with reflective shades. (CREDIT: Instagram / @nicolaannepeltz) Meanwhile Harper showed off her impressive manicure as she rested on the lap of her brother's fiancée. During a recent tutorial for Vogue’s “Beauty Secrets” series, Nicola revealed that she loves getting dolled up with her stylish future sister-in-law. (CREDIT: Instagram / @nicolaannepeltz) 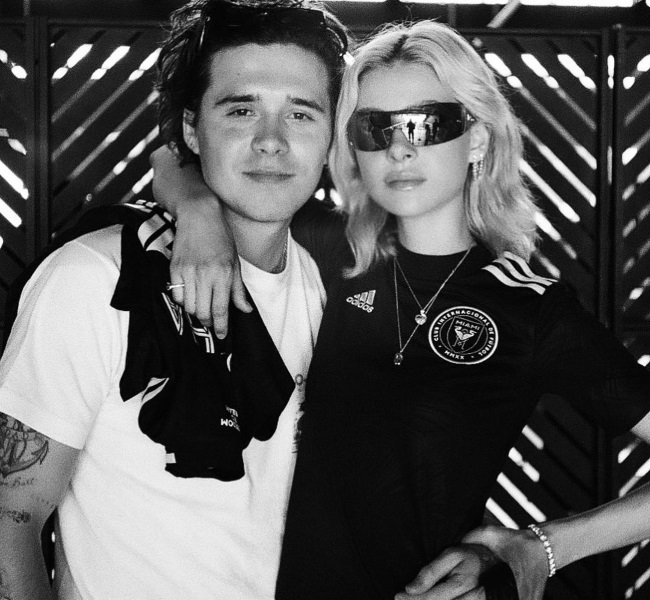 Brooklyn (22) looked smitten as he rested his hand on Nicola's waist in another sweet snap. (CREDIT: Instagram / @nicolaannepeltz)

Before she became the future Mrs Beckham, Nicola Peltz’s life wasn’t too shabby. Here’s the lowdown on the Transformers: Age of Extinction actress’ super-rich family.

There shouldn’t be any problems paying the bar tab at the couple’s upcoming nuptials. Nicola’s father, Nelson (78), is said to be worth over $1,5 billion, according to Forbes, making him the 432nd richest person in the US.

He dropped out of the University of Pennsylvania’s The Wharton School in 1962 and instead built his family’s tiny frozen-food business in Brooklyn, New York City, into the largest frozen food distributor in the northeast.

From there, he assembled the biggest packaging company in the world, Triangle Industries, which was sold in 1989 netting him around $840 million. Not content to rest on his laurels, however, in 2005 he then co-founded the alternative investment management fund, Trian Fund Management, through which he has made lucrative investments in major names like Heinz; Cadbury; Kraft Foods; and US fast-food outlet, Wendy’s.

Nelson was a loyal supporter of former US president Donald Trump, whom he has lived close to in Palm Beach, Florida, for many years.

Another well-known acquaintance of his is the late Jeffrey Epstein. His phone number is said to be among the thousands in Epstein’s “black book” and he was in a consortium of investors who, along with the disgraced financier, were looking to buy New York Magazine in 2003.

Nelson married the former fashion model, his third wife, in 1985.

The mother of eight of her husband’s 10 children, insiders describe the petite blonde as a keen philanthropist with an impressive collection of diamond jewellery.

With her former modelling career and eye for glamour, Claudia is likely finding some common ground with fashionista Victoria. And as fellow mothers of large broods of children, they can surely bond over the highs and lows of raising big families.

Insiders claim that’s apparently just what happened when Posh and Becks rang in the New Year and "some lovely quality time" at the Peltz’s $70m oceanfront mansion in the Sunshine State. The 36-year-old investor is arguably the most business-savvy sibling out of the Peltz clan as he's served as a partner and senior analyst at his father's investment management firm.

The Yale University graduate tied the knot with Hallie Dunn in 2018, and the couple share six-month-old son Asher. They recently splurged on a waterfront mansion in Palm Beach County, complete with six bedrooms, seven bathrooms, a massage room and a swimming pool. Nicola – who got her first major role as Katara in 2010’s The Last Airbender – isn’t the only thespian in the family. Her older brother, Will (34), moved from the Big Apple to Los Angeles in 2009 and bagged minor roles in a series of film productions.

He’s since appeared in flicks such as Men, Women & Children; Sierra Burgess is a Loser; and Time Freak; and more recently in hit TV show Euphoria. Before falling in love with the idea of acting at the age of 12, Nicola had wanted to be an ice-hockey player like her brother Brad (31), who played for the Ottawa Senators between August 2012 and April 2013.

After retiring, the Yale graduate went on to become the founder of Mymo, an automated scheduling system for medical appointments. The well-connected tech entrepreneur often shares photos of himself rubbing shoulders with celebs such as Elon Musk and Cindy Crawford. Nicola's only sister trained as a competitive figure skater and studied film at New York University's exclusive Tisch School of the Arts before switching her focus to the fashion industry.

These days the 30-year-old runs children’s designer brand Leah + Rae, which sources its materials from across the globe and is made in a female-run factory in Manhattan.

The brunette beauty is married to Franz Buerstedde, the managing director at Rhône Group, and the couple share two daughters, Eva and Lila Rae, as well as a 10-month-old son named Phoenix Blu. The 27-year-old tech entrepreneur features in Forbes' 30 Under 30 list for consumer technology this year. He is the CEO of social networking company Twenty, an app that helps “friends meet up in real life by planning future hangouts”.

According to Forbes, the company recently joined forces with location-based network Mappen, has 2 million users and has raised more than $40m in funding. Nicola's 17-year-old twin brothers hit headlines in May 2016 when Nelson allegedly forked out a whopping $2m for their bar mitzvahs. Both the Beckhams’ £30m house in Holland Park, West London, and their £6m farmhouse in the Cotswolds look seriously unimpressive compared with the Peltz family residences.

High Winds, the family’s mega mansion in Bedford, New York – from where Nelson reportedly used to commute to work in the city by helicopter – boasts a lake, waterfall, an indoor ice-hockey rink and even a flock of albino peacocks.

The family also own a palatial home in Florida’s Palm Beach. Nelson reportedly bought the house across the street to have a site where he could build a tennis court but was told he had to build a house to build the court. He conveniently found the solution by building a mansion specifically for his guests. The Peltz' Palm Beach, Florida home has a stunning outdoor pool and sits right on the ocean. (CREDIT: TWITTER/@GREGP41116)

We live in a world where facts and fiction get blurred
In times of uncertainty you need journalism you can trust. For only R75 per month, you have access to a world of in-depth analyses, investigative journalism, top opinions and a range of features. Journalism strengthens democracy. Invest in the future today.
Subscribe to News24
Next on You
‘I choose to keep my heart free of bitterness’: wife of fired Hillsong pastor Carl Lentz breaks her silence