Charlize Theron shares rare glimpse of her daughters: a lookback at her parenthood journey 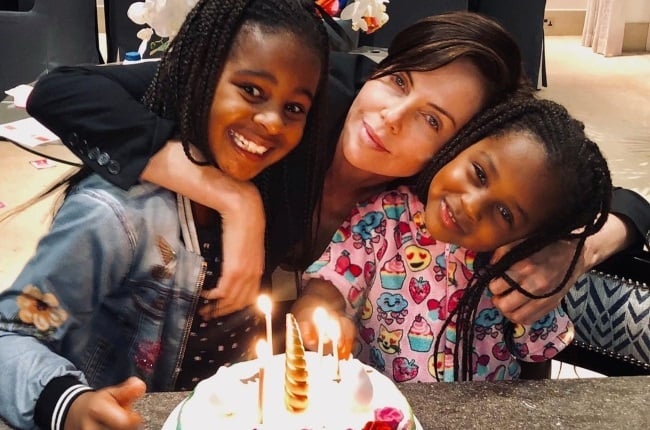 While the single mom tends to keep her personal life mostly out of the spotlight, she recently shared a rare glimpse of her daughters, Jackson (left) and August, on Instagram. (PHOTO: Instagram / @charlizeafrica)

She may have credited them with “giving her perspective,” but Charlize Theron doesn’t often share images of her daughters, Jackson and August, on social media.

But the actress pulled back the curtain on their lives when she recently posted an Instagram video of the trio enjoying some sun and surf while on holiday in Greece.

In the clip, the Oscar winner and her youngsters leapt hand-in-hand from the side of a boat into the Aegean Sea.

"Me and my girls 4 life," Charlize said. 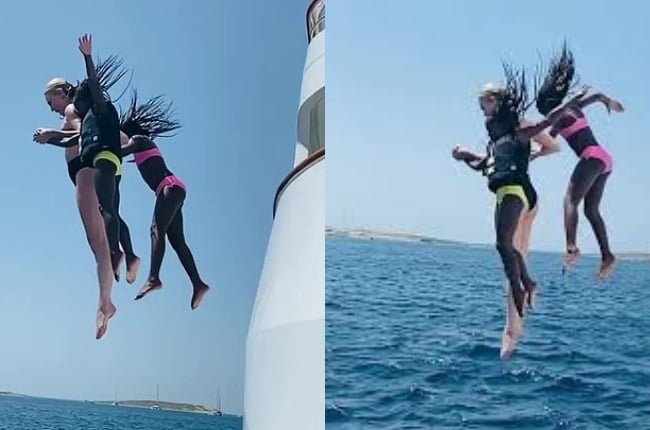 Charlize and her girls were seen leaping off a mega-yacht into the ocean in the post, which she captioned: 'Me and my girls 4 life.' (PHOTO: Instagram / @charlizeafrica)

The last time fans were treated to pics of the girls on social media was in September 2020 when Charlize celebrated National Daughters Day with a tribute to the kids who made her a parent.

"My heart belongs to these two beautiful powerhouses," the 45-year-old star wrote on Instagram. "I will never be the same."

The South African-born actress said she was glad she started her family later on in life.

“I do know that choosing to be a mom in my late thirties has been really great for me,” she told W magazine. “It’s given me perspective.”

The Bombshell star also told British Vogue that she always wanted to have children.

“I hope to be like my mom. Fair, tough, and supportive,” she said, referring to her mother, Gerda Maritz.

“Her greatest skill was encouraging me to find my own person and own independence.” But despite the joy her kids have brought her, the journey to bringing them home proved to be a difficult one.

"Some of the lowest points in my life were dealing with the first time I filed for adoption – it really took an emotional toll. There were many situations that didn’t work out, and you’d get attached and have all your hopes up and then just get crushed."

Her mother reminded her that when Charlize was a little girl growing up in Benoni, South Africa, she had written a letter asking to go to an orphanage because she wanted a brother or sister.

"Adoption was always my first choice, even when I was in a relationship. I was very honest with my partners that I was open to having my own biological kids, but that adoption had to be a part of my life. I felt that strongly about it." The girls may be growing up in upmarket West Hollywood, California, but they’re not strangers to their mother’s South African roots.

"I’m raising two beautiful proud black African girls and I want them to find themselves and not necessarily push my ancestry on them, but I’ve taught them two very sweet Afrikaans songs about politeness."

Now that she’s got two little ones at home, the Golden Globe winner is content with her single status – but Jackson and August want their mom to date.

“Two days ago, I was in the car with my two girls and my little one said something like, ‘You need a boyfriend!'” the Tully star said in July 2020 during an episode of the In Charge with DVF podcast.

“And I said, ‘Actually, I don’t. Right now, I feel really good,’ and she’s like, ‘You know what, Mom? You just need a boyfriend. You need a relationship!’”

She told her daughter she was in a relationship with herself which took her kid aback. “She had this look in her eye like she’d never really contemplated that that was even a possibility,” Charlize told podcast host and designer Diane von Fürstenberg.

“Her mind was blown, but I know that was the day that she realised there’s a different possibility.”

Charlize’s last public relationship was with actor Sean Penn – they called it quits in 2015. Charlize's last public relationship was with actor Sean Penn. The former couple were pictured attending a party with Jackson in April 2015, shortly before they split. (PHOTO: Gallo Images / Getty Images)

She may be loving the single life, but Charlize readily admits that she’s not doing it all by herself either.

"I knew that I’d have to have my mom help me if I was going to do this as a single parent. To not acknowledge my mom in coparenting my children would be a lie. I’d feel pretty alone if I didn’t have a partner in crime in all of this,” she told Elle magazine.

Charlize says she thought her older child was a boy until a then three-year-old Jackson looked at her and said, "I’m not a boy!"

From that moment on, the Oscar-winner embraced the fact that she was raising a transgender girl.

Speaking to The Daily Mail about the rumours and confusionsurrounding her child, Charlize clarified: "Yes, I thought she was a boy, too."

But the actress has since been raising her eldest child as a girl. Charlize says her eldest daughter, Jackson, has been identifying as a girl since the age of three. (PHOTO: Instagram / @charlizeafrica)

"My kids were born who they are and exactly where in the world both of them get to find themselves as they grow up, and who they want to be, is not for me to decide," she explained.

"My job as a parent is to celebrate them and to love them and to make sure that they have everything they need in order to be what they want to be. And I’ll do everything in my power for my kids to have that right and to be protected within that."

We live in a world where facts and fiction get blurred
In times of uncertainty you need journalism you can trust. For only R75 per month, you have access to a world of in-depth analyses, investigative journalism, top opinions and a range of features. Journalism strengthens democracy. Invest in the future today.
Subscribe to News24
Next on You
Diva tactics: Las Vegas insiders brand Adele’s team a ‘nightmare’