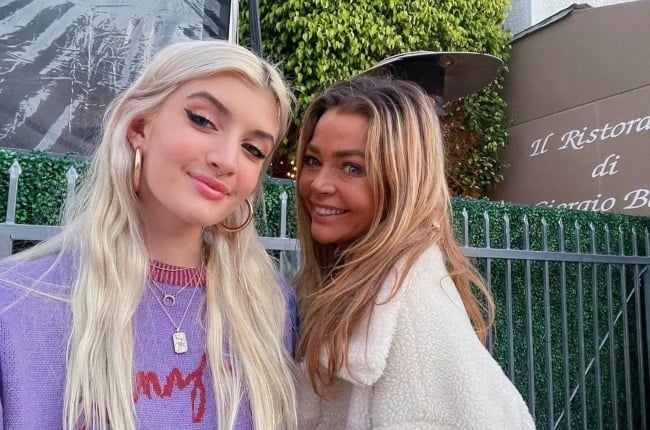 Denise Richards and her daughter Sami Sheen have both opened OnlyFans accounts so they can share photos of themselves and get paid for their postings. (PHOTO: Instagram/ @samisheen)

When Sami Sheen revealed that she'd opened an account on the X-rated platform, her famous parents had very different reactions to the news.

Her dad, Charlie Sheen, was furious and blamed ex-wife Denise.

“I don't condone this,” the actor said in a statement. “But since I’m unable to prevent it, I urged her to keep it classy, creative and not sacrifice her integrity.”

He added that it was only allowed because Sami lives with Denise and that it would never happen if she lived with hi.

Denise, on the other hand, not only rallied behind her daughter but took a leaf out of her book. The actress and former model recently announced on her Instagram page that she's opened her own OnlyFans profile.

“Ready . . . here we go,” she captioned a video of herself in a white dress walking into the ocean.

Denise (51) hinted she might be considering joining the site a week before the announcement.

“If I can get paid, and at my age, to see me in a bikini? Perhaps I should open my own account,” she wrote in a lengthy Instagram post.

Denise defended Sami’s decision by referencing her raunchy past.

“I also can’t be judgmental of her choices. I did Wild Things and Playboy. Quite frankly, her father shouldn’t be either.”

She added that there was no difference between posting a bikini snap on Instagram for free versus getting paid for it.

It seems her words hit home for Charlie, who then released another statement saying his ex had made “salient points” in her post.

“Now more than ever, it’s essential that Sami have a united parental front to rely upon, as she embarks on this new adventure,” the Golden Globe winner said. “From this moment forward, she’ll have it abundantly.”

Denise, who's married to actor Aaron Phypers (49), has another daughter, Lola (17), with Charlie. She also adopted daughter Eloise (11) as a single mom.

Meanwhile, Sami appears to be heeding her dad’s advice. She invited her subscribers to suggest what kind of content she should post but added: “Nothing nude, please.”

We live in a world where facts and fiction get blurred
In times of uncertainty you need journalism you can trust. For 14 free days, you can have access to a world of in-depth analyses, investigative journalism, top opinions and a range of features. Journalism strengthens democracy. Invest in the future today. Thereafter you will be billed R75 per month. You can cancel anytime and if you cancel within 14 days you won't be billed.
Subscribe to News24
Related Links
More bad news for Charlie Sheen
Denise Richards: I’m still searching for The One
Charlie Sheen's Twitter outburst 'blamed on holiday no-go'
Next on You
Malia Obama has moved on after her breakup and is dating someone nearly a decade older than she is