Lisa Marie Presley at the Golden Globes Awards earlier this month. She died unexpectedly two days later of a heart attack at the age of 54. (PHOTO: Gallo Images/Getty Images)

It was a night of high glamour and big gongs and Lisa Marie Presley, dressed edgily in black with her tattoos peeking out, seemed to be having a fine time.

Her appearance at the Golden Globes marked the first time she’d been at a major Hollywood shindig since becoming a semi-recluse since the death of her son, Benjamin, so there was a lot to celebrate. Priscilla Presley joined her daughter at the recent Golden Globes to support Austin Butler, who won an award for his portrayal of the king of rock in the Elvis biopic. (PHOTO: Gallo Images/Getty Images) 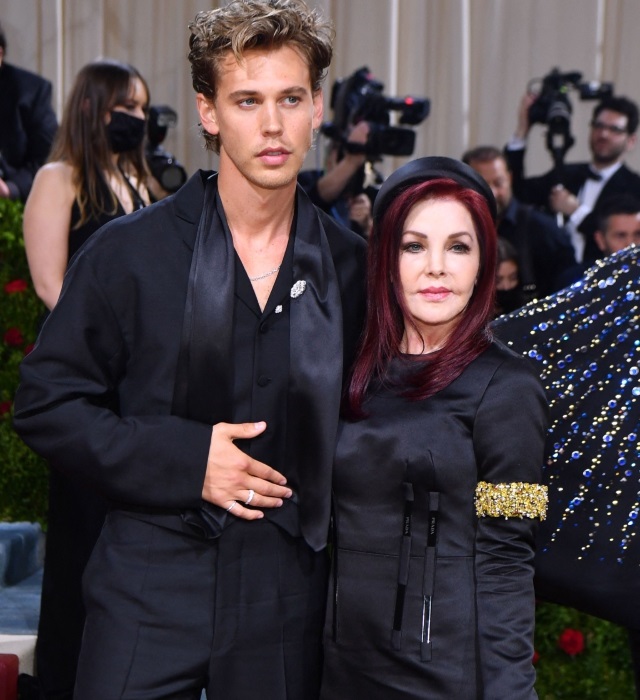 Especially after Austin Butler, who plays her dad in the Baz Luhrmann biopic, Elvis, scooped the Best Actor award. Lisa Marie and her mom, Priscilla, were in tears as Austin thanked them for “opening your hearts, your memories, your home to me”.

But when Lisa Marie gate-crashed an interview with Austin afterwards, there were a few concerns. She appeared to be “struggling” to form words, some witnesses said, and “seemed a bit unsteady on her feet”.

Two days later she was dead of cardiac arrest and the final chapter of her tragic life had been written.

‘Lisa Marie was the most passionate, strong and loving woman I have ever known’
- Priscilla Presley

Lisa Marie (54) was buried alongside her son and her father in the Meditation Gardens of the Presley home, Graceland, in Memphis, on 22 January – another member of the famous family gone too soon.

The memorial service was filled with many famous faces including performers such as rocker Axl Rose who sang the Guns ’n Roses hit November Rain, Alanis Morissette who sang Rest, and the Duchess of York, Sarah Ferguson, who read a poem entitled A Tribute to Children.

Priscilla read a moving poem at the service, in which she said, “A broken heart was the doing of her death. Now she is home where she always belonged, but my heart is missing her love.”

Like Elvis, who died at 42 from a heart attack brought on by years of booze and pills, Lisa Marie had a long history of substance abuse, enduring five stints in rehab for cocaine and opioid use.

She said she started taking drugs as a teenager after witnessing so many around her and recalled seeing her father taking “handfuls of pills”.

In her foreword for author Harry Nelson’s 2019 book, The United States of Opioids: A Prescription for Liberating a Nation in Pain, she opened up about her addiction.

‘You may read this and wonder how, after losing people close to me, I also fell prey to opioids’
- Lisa Marie Presley

“It only took a short-term prescription in the hospital after giving birth to my twins for me to feel the need to keep taking them,” she wrote.

Lisa Marie’s story is peppered with sadness. She was an only child and Elvis spoilt her rotten, buying her fur coats and jewels and sending cars to pick her up at school so she could join him on tour. But when she was nine, it all came to a crashing halt. Lisa Marie saw her father’s bloated body sprawled face down in a pool of vomit on the floor of his bathroom, people trying desperately to resuscitate him.

“What’s wrong with my daddy,” she asked. Later she heartbreakingly acknowledged, “My daddy’s dead.”

Over the years she sought happiness in the arms of men, but ended up with a string of failed romances. Her first marriage, to singer and actor Danny Keough in 1988, lasted six years and produced kids Riley and Benjamin. Danny and Lisa Marie remained close until her death – he lived with her and was the one who administered CPR when he found her unresponsive on her bedroom floor. Lisa Marie's first marriage was to musician Danny Keough, who she remained on good terms with and was living with at the time of her death. (PHOTO: Gallo Images/Getty Images) Pop star Michael Jackson was her second husband, but their relationship imploded when he was linked to child abuse. (PHOTO: Gallo Images/Reuters)

After their divorce in 1994 she jumped into the arms of Michael Jackson, who she’d been friends with since 1975, marrying him in secret that same year in the Dominican Republic.

However, things collapsed after just two years when Michael was accused of child sexual abuse. Lisa says she was “sucked into” believing Michael was a “misunderstood person” and became obsessed with trying to “save” him.

In an interview with Oprah Winfrey, Lisa Marie admitted she felt manipulated by Michael, but any feelings of bitterness had died with him. “When we were together, we were really in love – and then we had the rough patches.”

She then got engaged to singer John Oszajca, but broke things off when she became infatuated with actor Nicolas Cage. They wed in 2002, but it was all over 107 days later, with the actor filing for divorce after they failed to “stabilise” each other's lives.

“We had a great connection,” Lisa Marie said. “We were both a bit gypsy spirited, you know, tyrannical pirates. And [if] one pirate marries another they will sink the ship – basically that’s what it comes down to.” The singer with her fourth husband, Michael Lockwood. They were embroiled in a bitter custody battle over their twin girls at the time of her death. (PHOTO: Gallo Images/Getty Images)

READ MORE | Police confirm: Lisa Marie Presley's husband under investiagtion for child abuse after she finds his 'indecent' photos and videos of children

A bitter custody battle followed and at one stage Lisa Marie lost custody of the twins who went to live with her mother after she returned to drugs.

‘I was a mess, I’d been abusing cocaine terribly’
- Lisa Marie Presley in 2017

In 2020, her world collapsed when Benjamin died by suicide at 27. “His death shattered my heart and my soul into almost nothing,” she said. “It swallowed me whole.”

At the time of her death, Lisa Marie was still fighting custody issues with Michael, who was demanding $40 000 (R683 000) a month in child support.

Money had also been an issue in Lisa Marie’s life. She whittled away most of her $100 million (R1,68 billion) inheritance and was reportedly in debt to the tune of $16 million (R270 million). Lisa in an Instagram post with her three daughters: teenage twins Harper and Finley Lockwood and Riley Keough, who is an actress. (PHOTO: Instagram/lisampresley)

In the weeks before her death she was reportedly spending $92 000 (R1,55 million) a month on rent and repayments on a Maserati.

Lisa Marie inherited her father’s estate and at the age of 25 she turned Graceland into a tourist attraction and set up Elvis Presley Enterprises to benefit from his image and legacy.

But in 2018 she sued Barry Seigel, her former business manager, accusing him of squandering her finances, leaving her with unpaid credit card bills and selling 85% of her interest in Elvis Presley Enterprises.

Seigel in turn blamed Lisa Marie’s “lavish spending” and the lawsuit was eventually settled out of court. In 2021 Priscilla sold her LA mansion to try to help with her daughter’s debt.

Comforting her loved ones is the fact that the Elvis movie managed to bring some joy into Lisa Marie’s life.

“It’s finally something that myself and my children and their children can be proud of forever,” she said. But her happiness was tinged with sadness.

“It breaks my heart that my son isn’t here to see it. He would have loved it as well.”

We live in a world where facts and fiction get blurred
In times of uncertainty you need journalism you can trust. For 14 free days, you can have access to a world of in-depth analyses, investigative journalism, top opinions and a range of features. Journalism strengthens democracy. Invest in the future today. Thereafter you will be billed R75 per month. You can cancel anytime and if you cancel within 14 days you won't be billed.
Subscribe to News24
Next on You
At last! White Lotus star Jennifer Coolidge finally gets the kudos she deserves as the kooky queen of Hollywood