Elon Musk’s transgender daughter's petition to change her gender from male to female and drop her last name has been granted by a court in California.

The teen made the application at the Los Angeles County Superior Court, stating that she wants to distance herself from her father by taking on her mother’s surname.

“I no longer live with or wish to be related to my biological father in any way, shape or form,” her petition reads.

A judge has granted Vivian's request and ruled for a new issuance of a birth certificate.

Vivian's mom is Canadian author Justine Wilson, who he married in 2000.

The couple are parents to twin sons, Xavier and Griffin, and triplet boys, Damian, Kai and Saxon (16). They met during Justine’s first year at Queen’s University in Ontario, Canada, where Elon was also a student.

“A fellow student a year ahead of me, he was a clean-cut, upper-class boy with a South African accent who appeared in front of me one afternoon as I was leaping up the steps to my dorm,” she recalls.

“He said we’d met at a party I knew I hadn’t been to. Years later he would confess that he had noticed me from across the common room and decided he wanted to meet me.”

After tying the knot they welcomed their first child, Nevada, but the newborn died in 2002 from sudden infant death syndrome when he was just 10 weeks old.

“Nevada went down for a nap, placed on his back as always, and stopped breathing,” Justine wrote in an essay for Marie Claire.

“By the time the paramedics resuscitated him, he had been deprived of oxygen for so long that he was brain-dead.”

Nevada spent three days on life support in hospital before Justine and Elon decided to switch off the machines.

“I held him in my arms when he died,” she recalls. 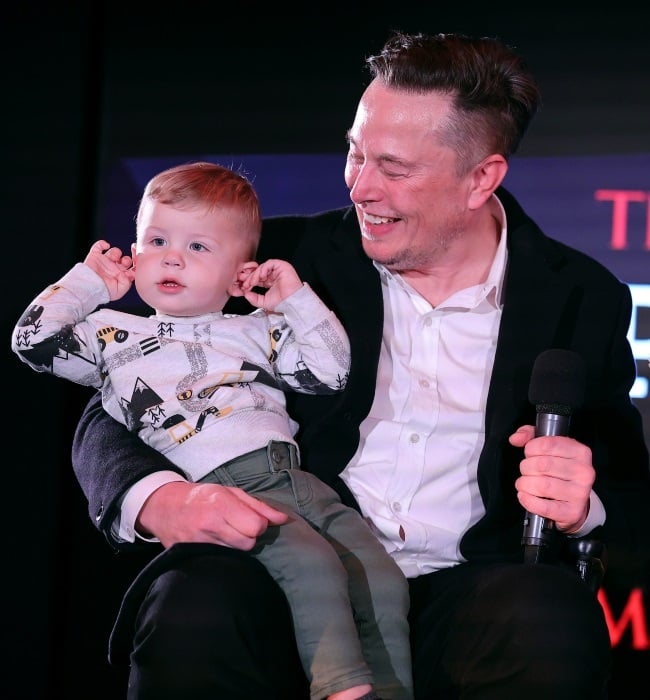 With his son, X Æ A-12, at the TIME Person of the Year event in December. (PHOTO: Getty Images)

Justine and Elon coped with Nevada’s death by expanding their family as soon as possible.

They welcomed each of their five kids through IVF.

The pair divorced in 2008 and share custody of their kids.

Elon hasn't publicly commented on Vivian's petition but Justine took to Twitter to share a telling conversation between her and one of the twins.

"'I had a weird childhood,' my 18 year old said to me," Justine tweeted shortly after the news broke. "'I can't believe I'm as normal-seeming as I am.'"

Although she doesn't name the teen, many believe Justine was referring to a conversation between her and Vivian.

Unlike her ex, Justine has largely remained out of the public eye.

It’s unclear what drove Vivian’s decision to disown her billionaire father but it could be his lack of support for the LGBTQIA+ community.

In 2020 the Tesla CEO was criticised for sharing a series of tweets mocking people who use pronouns in their bio on social media.

“I absolutely support trans, but all these pronouns are an aesthetic nightmare,” he wrote.

Elon’s tweets were branded insensitive and the billionaire was forced to apologise.

Recently, he weighed in on the debate on what it means to be a woman.

“We are simultaneously being told that gender differences do not exist and that genders are so profoundly different that irreversible surgery is the only option,” he tweeted.

“Perhaps someone wiser than me can explain this dichotomy.”

Aside from his five kids with Justine, Elon also has a two-year-old son, X Æ A-12, and six-month-old daughter, Exa Dark Sideræl, with Canadian singer Grimes.

We live in a world where facts and fiction get blurred
In times of uncertainty you need journalism you can trust. For 14 free days, you can have access to a world of in-depth analyses, investigative journalism, top opinions and a range of features. Journalism strengthens democracy. Invest in the future today. Thereafter you will be billed R75 per month. You can cancel anytime and if you cancel within 14 days you won't be billed.
Subscribe to News24
Next on You
Caitlyn Jenner backs new policy banning trans women from women's swimming competitions