From music to modelling: these kids of celebrity parents are blazing their own trail Blue Ivy sits with her parents, Jay-Z and Beyonce, at the At the 2018 Grammys. (Photo: Gallo Images/Getty Images)

Sometimes genetics and talent combine in the best possible way to produce a shining little star.

And Blue Ivy Carter is one of the sparkliest of the lot. She may be only eight years old but she recently became the second-youngest kid in history to be nominated for one of music’s highest accolades.

Blue, the eldest of pop star Beyoncé and rapper Jay-Z’s three kids, features on her superstar mom’s hit Brown Skin Girl and has been nominated in the best video category at the 63rd Grammy Awards, which will take place virtually on 31 January. Beyonce and Blue Ivy in a scene from the music video of Brown Skin Girl. (Photo: Vevo)

The song, an ode to women of colour, is up against the likes of Future and Drake’s Life Is Good, Anderson Paak’s Lockdown, Woodkid’s Goliath and Harry Styles’ Adore You.

Blue, who turns nine on 7 January, is beaten in the nomination stakes only by Leah Peasall of The Peasall Sisters who had just turned eight when she sang on the O Brother, Where Art Thou movie soundtrack, which took home album of the year in 2001.

If Blue wins, her gilded gramophone gong will take pride of place next to her BET Award for her work on Brown Skin Girl and her NAACP Image Award for best duo or group, which she won in February.

Among her biggest fans is her grandmother, Tina Knowles-Lawson (67), who was bursting with pride after her granddaughter’s NAACP triumph.

“The youngest artist to win a major award,” she said on Instagram. “Grandma is so proud of you – eight years old! You’re giving all the beautiful little brown girls a voice.”

You could say Blue has been singing since birth. Jay-Z (51) featured her newborn gurgles and cries on his track Glory and she later did a rap solo on his 2017 album, 4:44. Sassy and talented Blue takes to the stage at the 2020 Superbowl in February. (Photo: Gallo Images/Getty Images)

“Beyoncé and Jay-Z love seeing her shine,” a family insider says. “Right now, it’s all about letting her grow, learn and have fun.

"If Blue wants to go into the family business and have a music career, they’ll be behind it all the way.” - family insider

Blue also wants to use her platform to try to make a difference, and earlier this year she posted a video encouraging people to fight Covid-19.

Using a bowl of water and soap, she demonstrated the importance of being vigilant about hygiene.?

“If you wash your hands, your hands will stay clean, but if you keep your hands dirty, you might get sick,” she said.

Blue’s creative skills go further than just singing. She was chosen to narrate the audio-book version of the Oscar-winning short film Hair Love about an African American dad learning to style his daughter’s hair.

The little girl is already raking in enough money to make your eyes water. Her personal fortune is estimated to be between $1 million (R14,5 million) and $5 million (R72,5 million), thanks to royalties and cameos on her famous folks’ creative offerings.

Beyoncé (39) couldn’t be prouder of her firstborn. “The best thing about having a daughter is having a true legacy,” she says.

But Blue isn’t the only celebrity offspring making her mark on the world – there are several other mini movers and shakers climbing the A-list ladder of success.

Watch out, Blue – this six-year-old might well be after your rapper kiddie crown! The seven-year-old daughter of rapper Kanye West (43) and reality star Kim Kardashian West (40) appears to be following in her famous father’s musical footsteps.

In March she made her rap debut at the Yeezy showcase at Paris Fashion Week and the crowds went wild. Dressed in a bright pink coat, ­baggy pants and wearing her hair in braids, the sassy little girl belted out, “Look at my shoes, they’re new and cool. See my school, I’m new, walk to the streets, yeah yeah.”The previous month North showed off her rapping skills at a school disco with a track she wrote herself. She’s also been creating dance routines on the popular app TikTok, some featuring her mom.

He’s been exposed to a world any young artist would give an arm and a leg for – and he’s only four years old. Asahd, the eldest son of DJ Khaled and his wife, Nicole Tuck (both 45), has already earned executive-producer credits on both his dad’s two most recent albums – 2017’s Grateful and 2019’s Father of Asahd.

If you’re inclined to go, “Well, that’s ­ridiculous”, Khaled insists his son has been influencing his music since he was four months old. Young as he is, the little boy gives invaluable input through his gestures and expressions in the studio, his dad says. “He can tell if the vocals aren’t right.”

The tot is a mini celebrity in his own right, often accompanying his parents to awards shows where he chills with his dad’s hotshot pals. He also boasts an Instagram fan base of close to two million.

With his high cheekbones and grey eyes he’s a dead ringer for his mom – and just like her he’s making his mark in the fashion world Mingus, the 21-year-old son of former ­supermodel Helena Christensen and The Walking Dead actor Norman Reedus (both 52), made his catwalk debut at London Fashion Week in February before coronavirus put a stop to everything. “Son taking a lil stroll in London,” Danish-­born Helena wrote on Instagram along with a photo of him walking in ­Tommy Hilfiger’s Ready To Wear show. Back in 2017 Helena – who was one of the original ’90s supermodels along with Cindy Crawford, Naomi Campbell and Claudia Schiffer, said her son wasn’t planning on becoming a model full-time but wanted to “work a little” so he could save money and pursue a career in filmmaking. 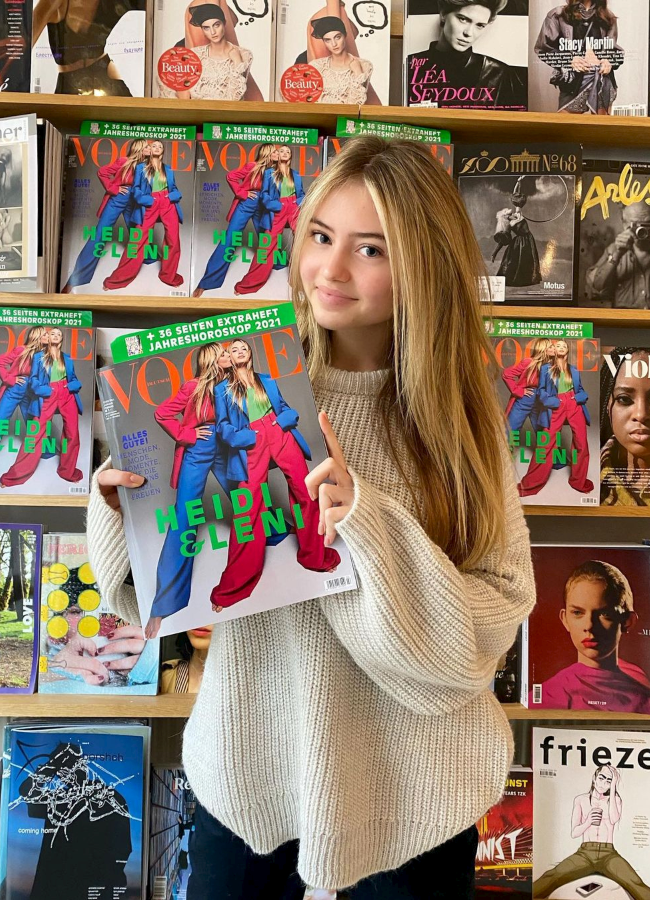 Leni Klum with the ­issue of German Vogue featuring her and her mom, Heidi. (Photo: Instagram / Leni Klum)

The teen, whose biological dad is F1 mogul Flavio Briatore (70) but who was officially adopted by Heidi’s singer ex-hubby Seal (57) in 2009, has made her modelling debut on the cover of Vogue Germany’s January/February issue with her famous mom.

“So excited for my first cover,” she says on Instagram. “I had so much fun on set and couldn’t dream of a better start!” She also thanks her ­famous mom for being “by my side”.

In an interview with the glossy ­fashion title, Heidi (47), who was once among the world’s highest-paid models, shares her thoughts on her daughter’s ­foray into the industry.

“Sixteen is a good age. If you’re allowed to drive a car, you can also have an official Instagram account and show your face. And to be allowed to start with a Vogue cover is an insane privilege.”

The eldest son of a British thespian is expected to be one of 2021’s breakout actors. 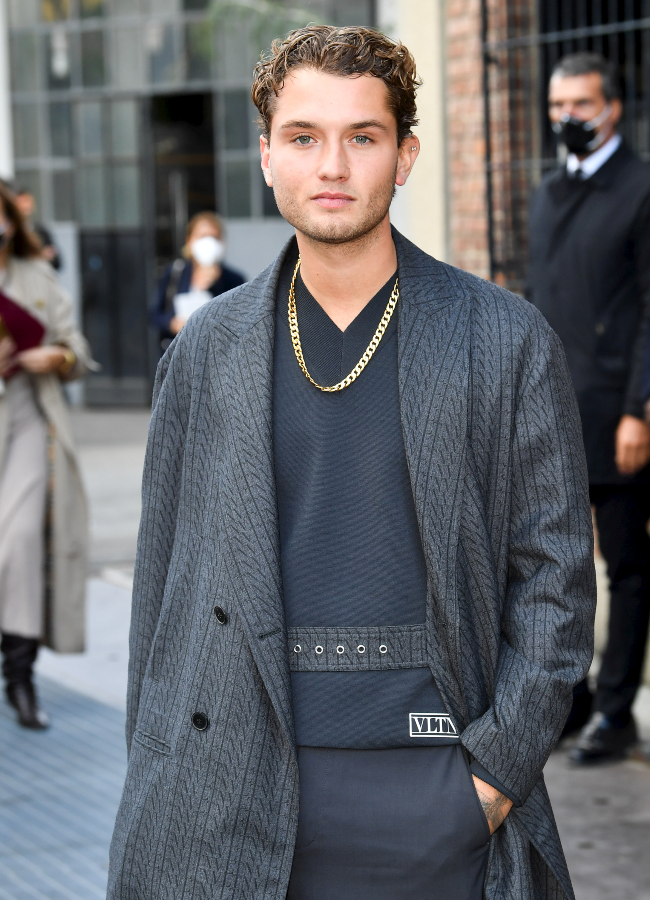 Having made a name for himself as a ­model, Rafferty (24) now wants to conquer the world of acting and follow in the footsteps of his parents, actors Jude Law (48) and Sadie Frost (55). Rafferty Law is following in the acting footsteps of his father with a role in the movie Twist. (Photo: Gallo Images/Getty Images)

He makes his movie debut in the upcoming Twist, a new adaptation of the Charles Dickens classic, playing the lead role of Oliver Twist opposite Game of Thrones’ Lena Headey as the villainous Sikes. Rafferty is keen to prove he’s ­talented in his own right and worked hard to secure the part. “I knew I had to prove I really deserved it so I prepared as much as possible.”

He’s also dipping his toe into the world of music and has an upcoming release with his punk rock band, Outer Stella OverDrive.

When it comes to social activism among the youth, these offspring of a Hollywood power couple are leading the way. Over the years the children of actors Will Smith (52) and Jaden Pinkett Smith (49) have thrown their weight behind various causes – often combining it with fashion and music.

Earlier this year, Jaden (22) started a Snapchat series called The Solution Committee, where fellow celebs and activists could talk about issues facing young voters. “This show is about educating the youth and making sure they feel empowered and ready to vote,” he said. He’s also the creator of the environmentally friendly group Just Water, which packages water in cartons and not plastic, and in 2019 launched a mobile vegan food truck to help feed the homeless in Los ­Angeles.

Both he and his sister have been heavily involved in the Black Lives Matter protests. “I feel like this is the first time I’ve ever seen so many people on the same page,” Willow (20) said during an appearance on her mom’s Red Table Talk show in June 2020. “We’re blurring the lines. Kids are growing up with this understanding that you can be whatever you want and you’re not defined by your oppression, your gender or your colour.”

The eldest daughter in the Jolie-Pitt clan is clearly following in her mom’s humanitarian ways. Zahara (15), adopted daughter of actors Brad Pitt (57) and Angelina Jolie (45), has found a creative way to give back – making jewellery. At the 2019 premiere of her mom’s movie Maleficent: Mistress of Evil (BELOW), she and her mom wore pieces from her collection created in collaboration with renowned jeweller Robert Procop.

Angie wore a 50-carat diamond scorpion while Zahara donned a set of earrings, a bracelet and a ring from her line. Proceeds from sales are donated to shelters for homeless and abused women and children in Los Angeles.

in 2020 the Oscar winner spoke of how proud she is of her in Time magazine. “My daughter ­Zahara is from Ethiopia and I’ve learnt so much from her. She’s an extraordinary African woman and her connection to her country is very much her own and something I only stand back in awe of.”

The last time Zahara was in Ethiopia was in December 2019 when she was accompanied by her mom and sister Shiloh (14) and met the country’s first female president, Sahle-Work Zewde.

Angie says none of her kids wants to follow their parents into acting. “They’re into business and humanitarian affairs,” she says. “And I couldn’t be happier.”

We live in a world where facts and fiction get blurred
In times of uncertainty you need journalism you can trust. For 14 free days, you can have access to a world of in-depth analyses, investigative journalism, top opinions and a range of features. Journalism strengthens democracy. Invest in the future today. Thereafter you will be billed R75 per month. You can cancel anytime and if you cancel within 14 days you won't be billed.
Subscribe to News24
Related Links
Kanye West breaks down at first campaign rally: ‘I almost killed my daughter’
Jaden Smith serves up new music and makes social media history
Willow Smith opens up about self-harming
Next on You
Chef gets salty about Victoria Beckham’s 'bizarre' eating habits and requests