Guy Fieri has said "I do," to officiating Kristen Stewart's wedding and she seems thrilled. (PHOTO: Gallo Images / Getty Images)

Kristen Stewart made a big announcement this week – that her long-time girlfriend, writer Dylan Meyer, is now her fiancée.

But that’s not all the Twilight actress shared with the world.

She also told Howard Stern that when she and Dylan say their “I dos,” she wants restaurateur and TV personality Guy Fieri, to preside.

“We’re either going to have no one — we’re just going to do it ourselves and just not have somebody officiate,” she told the SiriusXM host. “Or ... we did hear that Guy Fieri from the Food Network officiates a lot of gay weddings.”

She added that “the idea of that man — that sweet, sweet spikey-headed man — coming to our wedding and officiating it, it just makes me laugh so much.”

The Diners, Drive-ins and Dives star response? "I'm all in."

"Hey, Kristen! Guy Fieri here, and I've heard through the Flavortown grapevine that you are looking for a sweet, spiky-haired officiant for your wedding," he said in a pre-recorded video message on a recent episode of the Today Show. 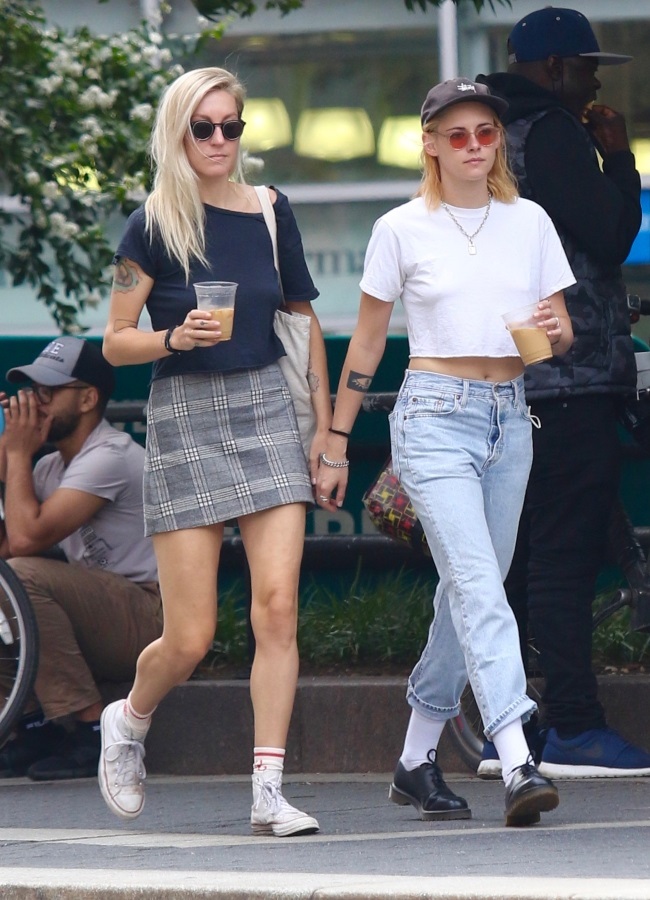 Kirsten and Dylan reportedly met on a movie set about eight years ago. The two started dating in 2019 and announced their engagement earlier this week. (PHOTO: Gallo Images / Getty Images)

Needless to say, Kristen was surprised by the response and asked if the 53-year-old was joking.

Talk show host Hoda Kotb then wanted to make sure the 31-year-old star’s request for Guy to do the honours was real, and the Spencer star made it clear she was all for him being a part of her special day.

“Absolutely!” Kirsten shot back with a huge smile. “Do you know where he lives? What’s his address? Does he live in L.A.? We should talk about this.”

The Food Network star wasn’t the only big name to land a starring role in a fellow celebrity’s nuptials this week.

On Wednesday, Kal, who recently came out as gay and announced his engagement to his partner of 11 years, Josh, took to Twitter to share a funny dream he had about the singer.

"Cardi B was on my flight to LA. I fell asleep and had a dream that she officiated our wedding on the plane and the three of us walked out of LAX holding hands," he wrote.

The Grammy-winning rapper responded right away. Kal and Josh’s upcoming nuptials won’t be the first time Cardi's helped out a happy couple on their big day.

On the Bodak Yellow rapper’s Facebook Watch series, Cardi Tries, she revealed that she helped brides Brandi Taylor and Shannon Herbert tie the knot in July 2021. Cardi was assisted by Raven’s Home actress Raven-Symonè, who served as a ring bearer.

Not just another guest...

Want to get married by a famous face? These stars have also fulfilled the scared duty of wedding officiant.

Carson officiated the nuptials of his The Voice co-stars Blake Shelton and Gwen Stefani in July 2021 in Oklahoma. He later called it the “perfect” day. The Watermelon Sugar crooner was there to help his long-time friend and manager Jeffrey Azoff get married in a socially distanced ceremony in January and caused a frenzy when he arrived with new love Olivia Wilde on his arm. The Mindhunter star served as the officiant for actor Alfred Molina and Frozen director Jennifer Lee’s garden nuptials in August 2021. Josh previously worked with Molina in the 2012 stage production Red and starred as the voice of Kristoff in the Frozen franchise, which Lee directed. The Kardashian-Jenner family matriarch has officiated many weddings, including Faye Resnick's marriage to Colton Haynes. The Legally Blonde actor officiated at his Alias co-star Jennifer Garner's marriage to Ben Affleck in 2005. The Oscar-winner introduced her publicist and a director friend, so it’s only fitting that she performed their 2012 wedding ceremony in Ojai, California. After gay marriage was legalised in New York, the Star Is Born actress officiated the wedding between her yoga teacher, Tricia Donegan, and her partner. The wrestler-turned-actor managed to pull off an epic surprise when he showed up to officiate the wedding of his friend Nick Mundy, a reporter for Screen Junkies, and Dilara Karabas. Sir Patrick Stewart asked his long-time friend and X-Men co-star to lead his wedding ceremony to Sunny Ozell in 2013, with the actor becoming ordained through the Universal Life Church in honour of the occasion.