Hugh Grant dishes the dirt on several of his former leading ladies (but Renée Zellweger isn’t one of them!) You’d think Hugh Grant’s charming and dashing on-screen persona would help him get along with his female co-stars, but turns out this isn’t a case of life imitating art.

The 60-year-old actor has singled out one leading lady as being "one of the few actresses I haven't fallen out with".

The British actor, who has admitted to not getting along with a string of his famous on-screen loves, recently revealed he was still close friends with his Bridget Jones's Diary co-star Renée Zellweger.

“I love Renée. She's one of the few actresses I haven't fallen out with,” Hugh revealed on SiriusXM's The Jess Cagle Show.“We got on very well together and we still exchange long emails. Hers in particular, at least 70 pages each, interesting stuff, but quite hard to decipher. She's a properly good egg and a genius."

He then went on to praise Renée for her Oscar-winning turn in 2019 biopic Judy, calling her portrayal, “about as good as acting gets”.

This isn’t the first time he’s sung the praises of the 51-year-old actress.

In an earlier People magazine interview, Hugh said, "Renée loves me and I love Renée. Well, I mean she’s in the same category as Emma Thompson, in terms of lunacy, but an amazing actress of course, and very generous."

Hugh had incredible on-screen chemistry with his female co-stars, which included Julia Roberts, Julianne Moore, Sarah Jessica Parker, Drew Barrymore and Emma. Off-screen, however, it was often a completely different story – although not all mean.

"Well, Drew, I think did hate me a bit. But I admired her. We just were very different human beings," he says of his Music and Lyrics co-star. "She was very LA and I was a grumpy Londoner. The funny thing is, although it was fractionally tense on the set of that film, I think the chemistry is rather good between us. Sometimes tension makes a good crackle."

Hugh later admitted to British talk-show host Graham Norton that he’d made the 45-year-old actress cry and revealed why she’d rubbed him up the wrong way. "She made the mistake of giving me notes. How would you take that, when you're acting with someone?" Hugh and Drew starred together in the 2007 film Music and Lyrics about a washed-up pop star whose career is revived when he sparks with an offbeat younger woman with a flair for words. PHOTO: IMDB

Their on-screen chemistry was off the charts in the 1999 cult romantic classic Notting Hill, but Hugh’s real-life relationship with the 53-year-old star is reportedly quite frosty after he made jokes about her appearance.

In a 2004 interview with Oprah Winfrey, Hugh said Julia was, "very big-mouthed. Literally, physically, she has a very big mouth. When I was kissing her I was aware of a faint echo”.

Then during a 2015 episode of Watch What Happens Live with Andy Cohen, a fan asked Hugh if they were still in touch."I've probably made too many jokes about the size of her mouth. She might hate me by now," he said. Hugh and Julia starred together in the 1999 film Notting Hill in which he plays an unassuming British bookseller, who meets and falls in love with Anna, a high-profile American actress. PHOTO: IMDB

“Southern belle. Charming. Gorgeous.” That was Hugh’s response when asked to describe the 62-year-old model-turned-actress.

For her part, Andie has good things to say about Hugh, with whom she starred in Four Weddings & a Funeral. Apart from calling him grouchy, that is.

"I really can't think of a bad part about working with Hugh. He was adorable," she told US talk-show host Andy Cohen. But when asked by Cohen if Hugh is the "crankiest person on the planet", Andie replied, "He was when I was working with him.” Hugh played Charles in Four Weddings & a Funeral, while Andie took on the role of Carrie. The 1994 film was the first of a string of hugely successful romantic comedies for the Brit. PHOTO: IMDB

When asked to dish on his Two Weeks Notice co-star, Hugh described her to Elle magazine as, “A genius. A German . . . too many dogs.”

Hugh has since dished on his chemistry with Sandra (56) on the set of their film where he said his co-star kept him laughing during filming.

“We got on extremely well. Even too well. She has that effect on me, that sort of friend one had at school who you can’t look them in the eye because it makes you laugh.” In the 2002 film, Sandra plays Lucy, a lawyer, who works for the handsome and rich George Wade but decides to quit because he treats her like a nanny. PHOTO: IMDB

“Brilliant actress. Loathes me,” is how he described his Nine Months co-star.  He’s yet to elaborate on why he made such a bad impression on the 60-year-old star. Hugh and Julianne starred as a couple expecting their child together in the 1995 film Nine Months. PHOTO: IMDB

Hugh says his 71-year-old co-star is also “a genius” – but a little challenged in the eyesight department.

“She doesn’t see very well, but she refuses to wear contact lenses. The result is, if we’re doing a scene, I could have been Denzel Washington.” The pair starred as a husband and wife in 2016 film the Florence Foster Jenkins about a 1940s New York socialite who dreams of becoming a great opera singer but has a lousy voice. PHOTO: IMDB

The Paddington 2 actor describes Emma (61), his co-star in Sense & Sensibility and Love Actually, as “a genius” but quips that she is “not remotely sane. She’s nuttier and nuttier as the years go”. Hugh described the 50-year-old actress as “clever and beautiful” and later told Graham Norton that they got on “extremely well”. 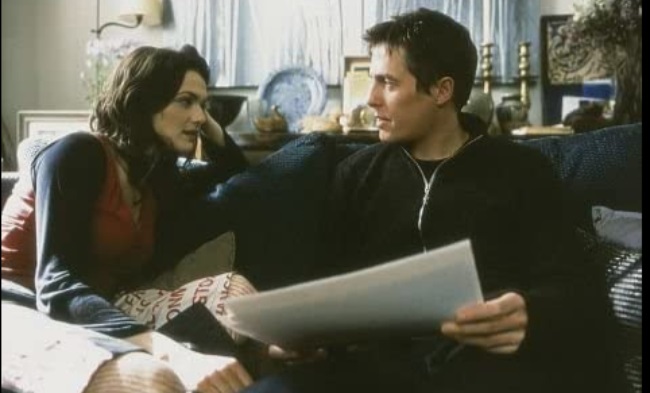 Hugh and Rachel worked together in About a Boy (2002), in which Hugh played Will, a rich, child-free thirtysomething who, in an attempt to lure available women, invents an imaginary son. PHOTO: IMDB

Although he has admitted to not exactly clicking with the 55-year-old star when they filmed 1996 thriller Extreme Measures, Hugh gushed over her after they shot 2009 comedy Did You Hear About the Morgans?.

“I find her very clever, funny, eccentric, not actressy, charming.” In Did You Hear About the Morgans?, the pair played a couple who, while in the process of splitting up, witness a murder and are forced into the witness-protection programme. PHOTO: IMDB

Hugh added the Australian actress to his list of co-stars this year with the hugely popular miniseries The Undoing.Nicole (53) said the pair – who have been friends for 25 years – got along really well.

"I feel very comfortable with him and part of what it took for this to work is that this couple has to be very sort of comfortable and happy," she told Entertainment Tonight.

"Nicole's a laugh," Hugh added. "[She's] a gossip, which I love. I can get stuff out of her. You gossip about yourself, which I like. I like all the dirt." In The Undoing, Nicole plays Grace Fraser, a psychologist whose world falls apart when her husband, Jonathan, is linked to the death of a young woman. PHOTO: IMDB