Most relationships between actors seem doomed to fail, but Hugh Jackman and Deborra-Lee Furness have proven true love can stand the test of time.

The couple, who recently celebrated their 25th wedding anniversary, shared a series of throwback pics from their wedding day.

“Being married to you Deb is as natural as breathing,” gushed Golden Globe-winner Hugh on Instagram. “From nearly the moment we met … I knew our destiny was to be together. In our 25 years – our love has only grown deeper. The fun, excitement and adventure more exhilarating; the learning even greater. I’m forever grateful to share our love, our life – and, our family together. We’ve only just begun.”

One previously unseen snap showed Hugh (52) and Deborra-Lee (65) sitting on wooden chairs during their wedding ceremony.

Instead of a conventional wedding dress, it appears as though the actress chose satin trousers complete with a train. She finished off her look with a layered pearl choker and styled her blonde hair into an updo with a long white veil attached.

So, how does the Wolverine and his wife, who is 13 years older than him, keep their marriage as strong as adamantium?

The pair met in Australia on the set of the short-lived Aussie TV show Correlli, in 1995.

At the time, Hugh had just landed his first professional gig, while Deborra-Lee was already widely known as a star Down Under.

“My first job out of drama school – it was a massive break for me. I was really scared,” Hugh recalled of their first meeting.“Deb, she was a big star. I get picked up, and Deb is in the front seat of the car. I’ll never forget. She took off her seatbelt and she turned around and put out her hand and took off her sunglasses and said, ‘Hi, I’m Deborra-Lee Furness, nice to meet you’. I remember thinking, ‘I like this girl’.”

But Deborra-Lee, who had just turned 40, wasn't looking to date the young up-and-comer, who was 27 at the time.

“I had just made my New Year’s resolution, I said, ‘I am not dating any actors, and definitely not under 30’.”

But the chemistry between them was undeniable.

"Before we were romantically involved or (I) had any idea that Deborra was interested. There was a chemistry. And every time we had a scene together, it was unbelievable . . . Professionally, I’ve never had anything quite like that again,” Hugh said.

A lovestruck Hugh devised a plan, inviting the cast, but especially Deb over for an evening of food and wine.

“She said, ‘I noticed you haven’t talked to me in like a week, what’s going on?’” “I said, ‘I got a crush on you. I’ll get over it, I’m sorry’. She goes, ‘Oh? Because I’ve got a crush on you too’. I never in a million years thought she reciprocated.” 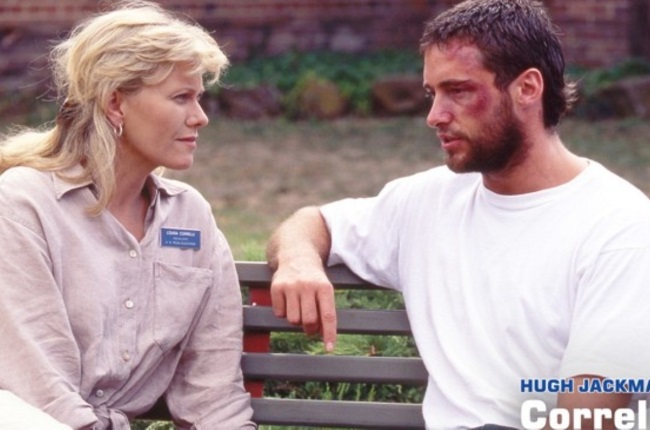 Hugh and Deborra shared their first kiss when their characters embraced in the 90s Aussie TV show, Corelli. (CREDIT: ABC)

After repeated miscarriages and multiple failed attempts with in vitro fertilisation, they adopted their son, Oscar, in 2000 and daughter Ava in 2005.

“Deb and I always wanted to adopt. So that was always in our plan,” the Les Misérables actor once candidly shared.

“We didn’t know where in the process that would happen, but biologically, obviously, we tried and it was not happening for us and it is a difficult time.”

They’re happy with how things turned out.

“We feel things happened the way they are meant to,” Hugh told the Herald Sun in 2011.

“Obviously, biologically wasn’t the way we were meant to have children. Now, as we go through life together, sure there are challenges but everyone’s in the right place with the right people. It sounds airy-fairy, but it’s something we feel very deeply.” Hugh’s career breakthrough came soon after starting a family with the woman of his dreams.

He snagged the role of Wolverine in Bryan Singer's X-Men in 2000, a part originally written for Russell Crowe. The film was a major box-office success, grossing a whopping $296 million, and catapulting the little-known actor to superstardom.

Hugh, who was 32 when Wolverine came along, said one secret to his long-lasting marriage is that they were already together before his career took off.

"One of the great pieces of fortune in my career, it started late, but that Deb and I were already set together, a team, madly in love, like literally before it all happened," he said.

"Deb was in the business before me and made some rules," he said. "We are not going to spend more than two weeks apart, and we are not going to work at the same time if we don't have to financially. So, one of us is always there to support the other." Although their 13-year age gap has shocked many, Hugh readily admits that if anything he is the one struggling to keep up with his much older wife.

“Anyone that knows Deb, literally, I am the old fuddy-duddy of the relationship,” he told US talk-show host Katie Couric.

Her husband might be considered hot property but Deborra-Lee has said that she’s tired of people branding her “lucky” for having nabbed him.

“That to me is a putdown,” she told Woman's Weekly in 2014. “It's like you suggesting I won the chook raffle.”

Nowadays, Hugh frequently reminds himself, and the world, that he’s the lucky one and wouldn't be nearly as successful without Deb’s support.

"Even at the Oscars, I walk out, I put my hand on my heart and I always look to Deb in the audience. Straight afterwards, I will not see anybody in my dressing room until Deb's been in. Because that is my foundation, that is the rock, that is the foundation of our family, and therefore my life."