Hugh Jackman as James Bond? These 15 famous movie roles were almost played by another actor Some actors are synonymous with the movies that made them superstars – Al Pacino in The Godfather, Harrison Ford in Star Wars, Julia Roberts in Pretty Woman and Kate Winslet in Titanic – but these acting greats weren’t the first picks for their most famous roles. We take a look at who nearly played the part in these hits.

Jack Nicholson as Michael Corleone in The Godfather (1972)

“Back then, I believed Italians should play Italians,” Jack said.“There were a lot of actors who could’ve played Michael, myself included, but Al Pacino was Michael Corleone. I can’t think of a better compliment to pay him.” The Hollywood legend passed on playing Han Solo in the first film of the blockbuster series because the script was too “out there”.

“It was mine for the taking. But I didn’t understand the script,” the Oscar winner said. Al, along with rising ’70s stars Jack Nicholson, Chevy Chase and Bill Murray were among those considered for the part of the dashing scoundrel who Harrison Ford would eventually play. The ’80s action classic made a superstar of its leading man, Bruce Willis, as world-weary cop John McClane, but did you know that Ol’ Blue Eyes had dibs on the part? Frank had starred in the 1968 thriller The Detective, based on a novel by Roderick Thorpe. The author’s follow-up book, Nothing Lasts Forever, was the basis for Die Hard, and the producers were contractually obligated to first offer the lead role to Frank, who was in his seventies at the time.

The From Here to Eternity star turned it down, along with several ’80s megastars, including Sylvester Stallone, Mel Gibson and Arnold Schwarzenegger. The Pretty in Pink star was unimpressed with the Pretty Woman script and turned down the role, but says it was for the best.

“The script was okay, but I gotta say, Julia Roberts is what makes that movie. It was her part. Every actor hopes for a part that lets them shine like that,” Molly said. Claire Danes and Gwyneth Paltrow as Rose in Titanic (1997)

The Homeland actress was nearly reunited with Leonardo DiCaprio, her Romeo + Juliet (1996) co-star for another doomed romance, but she wasn’t feeling the love.

“Honestly, I’d just made this romantic epic with Leo in Mexico City, which is where they were going to shoot Titanic, and I just didn’t have it in me,” Claire said.

Gwyneth was next in line to play Rose, the role that made a star of Kate Winslet. The Shakespeare in Love star admits regretting turning down the role, but isn’t bitter about it.

“I look back at the choices I’ve made and think, ‘Why the hell did I say yes to that? And no to that?’,” Gwyneth said. “And you know, you look at the big picture and think: ‘There’s a universal lesson here.’ What good is it to hold on to roles?” Matthew McConaughey as Jack in Titanic

The Magic Mike star got as far as auditioning opposite Kate for the role of Jack, which eventually went to Leo.

“I really wanted that. I auditioned with Kate Winslet. Walked away from there pretty confident that I had it. I didn’t get it. I never got offered that,” Matthew said. Hugh Grant and Nicole play a memorable couple in The Undoing, but they almost shared the screen years earlier. The Gladiator star turned down a $100 million payday when he decided not to play Aragorn in Peter Jackson’s epic fantasy trilogy. But as he explained it, Peter “was forced into talking to me, because there was a moment in time when everyone wanted me in everything,” Russell says.

If he’d been cast, he would’ve been paid 10% of the trilogy’s gross profit – about $100 million. Being a fellow New Zealander, Russell explained that he could hear certain inflections in the director’s voice during their initial conversation that gave away Peter’s true feelings.

“I’m talking to him on the phone, it’s like, I don’t think he even knows what I’ve done. I just knew that my instinct was that he had somebody else in mind, which turned out to be Viggo [Mortensen], and he should be allowed to hire the actor who he wants.” The Mad Max: Fury Road star was originally cast as Roxie, the role played by Renée Zellweger in the Oscar-winning musical.

“The director [Rob Marshall] kicked me off it. I was really bummed about it. And I think because I had it, I was like, ‘Ah . . . I’m gonna make this movie’ and I got kicked off it,” she recalled.

Before Rob was signed on for the film, another director was attached, who picked Charlize.

“Well, there was another director attached and he brought me on. And then that director got fired and this new director got brought on and he didn’t want to make the movie with me,” she explained. The Gravity star had tried for years to produce the film through her production company, Fortis Films, but was turned down by every studio in Hollywood.

“They were like, ‘Female boxing movies don’t sell’. I was like, ‘This is the most incredible piece’,” Sandra said, referring to the script based on the short stories by FX O’Toole. Even after Clint Eastwood was attached to direct with Hilary Swank as star, he battled to get studio support. The film went on to win four Oscars, including best picture, best director, best actress and best supporting actor (for Morgan Freeman). Ryan Gosling and James Garner brought Noah to life in this romantic drama, but the roles were originally intended for George and Paul – until George looked into the Cool Hand Luke star’s eyes.

“Paul and I talked about doing it, and we were sitting there one day and I was looking at him and I go, ‘I can't do this movie, Paul,’ ” George recalled in an interview.“[Paul] was like, ‘Why?’ I was like, ‘Because everybody knows what you look like at 30 years old. You got blue eyes, I got brown eyes. You’re too famous at 30 for me to be playing you at 30, it’s never gonna work.’ And he’s like, ‘I guess you're right.’" The Australian actor made his mark in Hollywood as Wolverine in X-Men (2000), which led to an offer to play the famous British secret agent.

“I was about to do X-Men 2 and a call came from my agent asking if I’d be interested in Bond. I just felt at the time that the scripts had become so unbelievable and crazy, that I felt like they needed to become grittier and real,” Hugh said.

His agent’s response was, “’Oh, you don’t get a say. You just have to sign on’,” Hugh adds. “I was also worried that between Bond and X-Men, I’d never have time to do different things.”

If Hugh had stuck around, he would’ve found out that “grittier and real” is what the filmmakers were going for when they rebooted the franchise with Daniel Craig in the lead. If Stephenie Meyer, author of the Twilight novels had had her way, The Witcher star would’ve played the brooding teen vamp.

“That’s the rumour I heard,” Henry says. “She wanted me to play the role, but it wasn’t up to her. And instead, a very talented actor played him instead.” 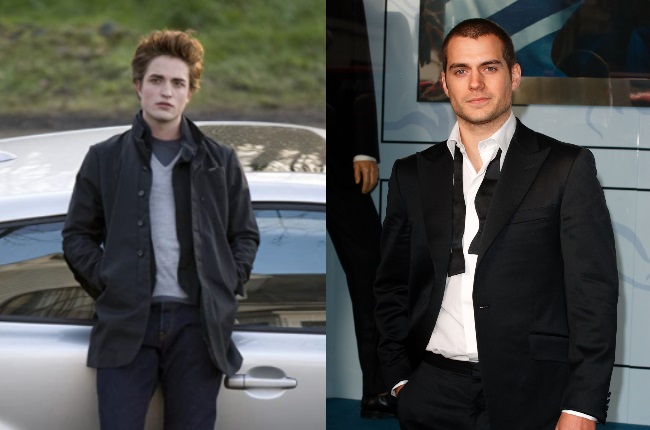 Emilia Clarke as Anastasia Steele in Fifty Shades of Grey (2015)

The Game of Thrones star was impressed by Fifty Shades’ director Sam Taylor-Johnson’s “beautiful vision” of the film based on the popular book series, but she didn’t want to get pigeonholed.

“The last time I was naked on camera on [Game of Thrones] was a long time ago, and yet it’s the only question I ever get asked because I’m a woman,” Emilia said. “And it’s annoying as hell and I’m sick and tired of it because I did it for the character – I didn’t do it so some guy could check out my tits, for God’s sake. “I did a minimal amount [of nudity] and I’m pigeonholed for life, so me saying yes to [Fifty Shades], where the entire thing is about sensuality and sex and being naked and all of that stuff, I was just like, ‘No way am I going to voluntarily walk into that situation and then never be able to look someone in the eye and be like, ‘No, you can’t keep asking me this question.’ ”

Dakota Johnson ultimately got the role. Ryan Gosling and Emma Stone are unforgettable in Damien Chazelle’s acclaimed musical, but the movie almost starred Emma and Miles.

“The casting of this movie, during the six years it took to get made, went through lots of permutations, and it’s true there was a moment where Emma Watson and Miles Teller were doing it,” Damien said.

“I got a call from my agent, saying, ‘Damien told [the studio] that he no longer thinks you’re creatively right for the project. He’s moving on without you’,” Miles recalled.