Pledging her support and empathy for the prince, the retired Irish artist recently wrote an open letter complimenting Charles and Diana’s youngest son, after watching his Apple TV+ documentary, The Me You Don’t See.

"As someone who has trauma-related mental health struggles, I wanted to let you know how bowled over I am by your Apple TV series. You're slammin' it, to use a musical term. You just keep shining on through," she wrote in a column for Ireland’s Sunday Independent newspaper.

In the documentary, Harry and Oprah Winfrey discuss their mental-health journeys as the Duke of Sussex recalls the anger, grief and pain he experienced after his mother, Diana, was tragically killed in a car crash in 1997. It also features other celebrities who open up about their struggles.

The Nothing Compares 2 U singer said she identified with the Duke of Sussex’s grief. "I'm writing this because you and I have something in common Harry. I also lost my mother in a car crash . . . I do know something of the grief you've been brave enough to share in the public arena,” she empathises, in her piece entitled Hi Harry, the Granny Forces are with You. In the Apple TV+ documentary The Me You Can't See, Harry admits to turning to alcohol and drugs to mask the trauma of his mother’s death in 1997. (PHOTO: GALLO IMAGES / GETTY IMAGES)

“It's a shock that takes years to come out of when someone dies so violently and suddenly. It's a lifetime's recovery."

"When so many of us see the work you're doing for people who experience mental health struggles, we see you stomping on stigma. And we're all delighted for you,” she wrote. “Most importantly, we know how proud your mama is of the incredible young man you are.”

READ MORE | Superstar gymnast Simone Biles on her Olympic performance: 'There is more to life than gymnastics'

The singer, who became famous for her cover of Prince’s band The Family’s track Nothing Compares 2 U, has had a number of public meltdowns.  Most alarming was her announcement on Facebook in 2015 when she said she had taken an overdose of drugs.

The singer, who converted to Islam in 2018, shared stories of her life and struggles in her memoir titled Rememberings, where she writes about her childhood abuse at her mother’s hands that haunted her for years – all which played a part and exploded on social media in 2015.

“For me, there was a lot of loneliness and publicly reaching out but there was also a lot of desperation, I was dying, I really was, so I was grasping anything that might keep me alive,” she said. 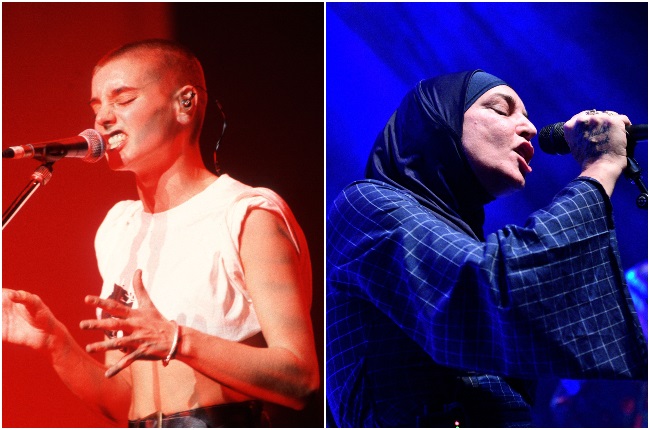 The singer has been diagnosed with bipolar disorder as well as complex post-traumatic stress.

A mother to Jake Reynolds (34), Roisin Waters (25), Shane Lunny (17) and Yeshua Bonadio (14), all from previous relationships, the 54-year-old admits to being in a better space today and has regular check-ins with doctors.

"I was mental," she told People earlier this year, referring to her struggles with mental illness. "But I don't regret those 'embarrassing' videos. I'm quite proud, in a weird way, that I was that open . . . The nature of a singer is to be emotionally honest. I've always been pretty open. And I have no regrets."

As more and more celebrities have opened up about their mental-health struggles, we’ve been reminded that they’re people just like us.

"Now more than ever, there is an immediate need to replace the shame surrounding mental-health with wisdom, compassion and honesty," Oprah said. "Our series [The Me You Don’t See] aims to spark that global conversation."

We live in a world where facts and fiction get blurred
In times of uncertainty you need journalism you can trust. For only R75 per month, you have access to a world of in-depth analyses, investigative journalism, top opinions and a range of features. Journalism strengthens democracy. Invest in the future today.
Subscribe to News24
Related Links
Former soldier Prince Harry reaches out to fellow war veterans following Afghanistan's fall to...
40 and fabulous! The Duchess of Sussex celebrates her 40th birthday in the most Meghan of ways
Simone Biles, Naomi Osaka, the Sussexes: why young people aren't shy to open up about their...
Next on You
Spotted! Bradley Cooper and Irina Shayk spark speculation that they're together again