Is it Halloween? Kanye West dons creepy mask as his name change is made legal Perhaps fittingly, given the ongoing Covid-19 pandemic, masks have been the go-to accessory for rapper Kanye West in the past few months.

But rather than stick to the stock standard cloth facial covering like the rest of us the musician has been getting, uhm, creative with his masks.

Kanye continued his streak of eccentric facial wear during a recent trip to Europe.

In Berlin, he was pictured wearing a creepy-looking pale mask that obscured his entire face. At a private wedding event in the German city he wore a dark grey face mask, along with an oversized jacket and Balenciaga Crocs boots.

Kanye in this mask might be my sprit animal pic.twitter.com/ToypM75UFz

But he might just have donned his freakiest facemask yet.

Earlier this week the Follow God crooner was pictured at JFK Airport in New York wearing a prosthetic mask bearing the resemblance of a Caucasian woman with eye make-up. Kanye changed out of a standard-issue pandemic-compliant cloth mask to put on the Halloween-ready look, which appeared to include eye shadow. (PHOTO: TheImageDirect.com / Magazine Features)

READ MORE: The lowdown on the sequel to Kim Kardashian and Ray J’s sex tape that’s set to be gifted to Kanye West

Fans reacted in amusement to the stunt, with one person suggesting on Twitter that the rapper was “trolling the media”.

“Kanye walking around like a [Grand Theft Auto V] character with that mask,” joked someone else.

“That mask Kanye was wearing...is one of the most unsettling fire things I’ve seen in a while,” wrote another fan. 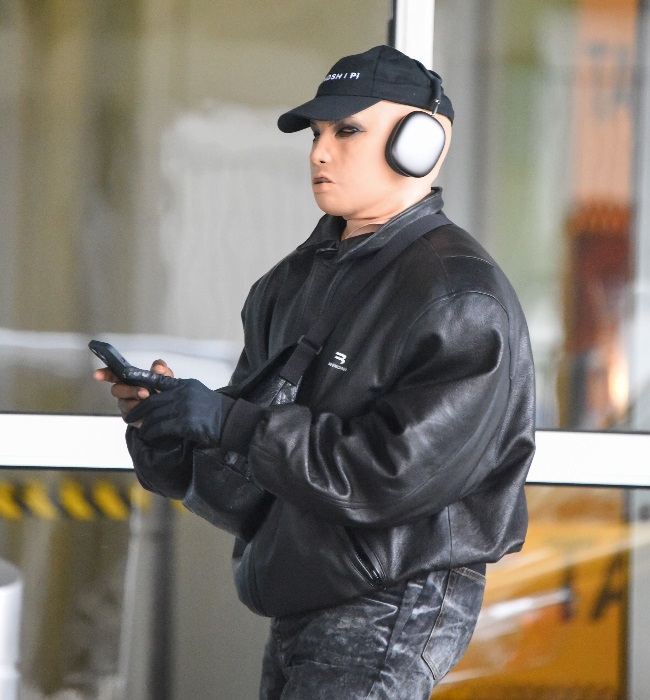 The sighting marked the second time in as many days Ye has been spotted wearing a creepy prosthetic face covering. (PHOTO: TheImageDirect.com / Magazine Features)

Kanye’s taste for reinvention hasn’t stopped at his choice of facial accessories.

After filing paperwork to change his name, the rapper, born Kanye Omari West, finally got what he asked for, and will be legally known as "Ye."

Judge Michelle Williams granted the change on Monday in a California courthouse, after the rapper filed a petition to change his name in August.

The musician hinted at the change as far back as 2018, when he released his studio album Ye, and then several months later tweeted: "the being formally known as Kanye West. I am YE."