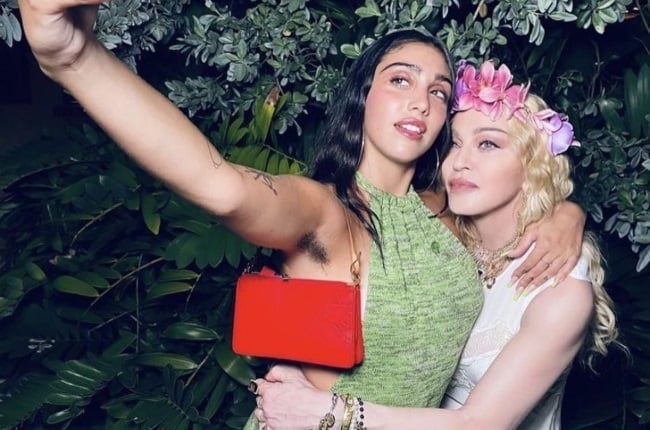 Lourdes Leon has shown she is just as risqué as her mother Madonna. (Photo: Instagram/ @lourdesleon)

As an aspiring model, Lourdes Leon may have chosen a different career to her popstar mother. But when it comes to taking risks and grabbing attention, the 24-year-old is rather like Madonna.

Lourdes recently shared racy snaps on Instagram that show off a giant tattoo on her back and precious little fabric on her derriere.

In one picture, she crouches beside a bed, throwing a sultry look over her shoulder. In another Lourdes, clad in a pink thong, purple dress and black stilettos, lies on a bed with her head resting in her hand.

As an aspiring model, Lourdes Leon may have chosen a different career to her popstar mother. But when it comes to taking risks and grabbing attention, the 24-year-old is rather like Madonna.

Lourdes, whose dad is fitness trainer Carlos Leon, has been making her mark on the modelling world since her debut four years ago and has starred in campaigns for celebrated designers such as Marc Jacobs and Stella McCartney.

Madonna has previously said Lourdes, or Lola as she’s called, is “insanely talented” but she doesn’t have the same drive as Madonna did when she was starting out.

“And again, I feel social media plagues her and makes her feel like, ‘People are going to give me things because I'm her daughter,’” Madonna told Vogue.

“But she also has a mother and I didn't. She grew up with money and I didn't. So everything is going to be different. But what can I do? I can't fixate on it. I just have to do my best.”

The Like A Virgin singer says her son, David Banda (15), has the most in common with her. “What he has more than anything is focus and determination. I'm pretty sure he gets it from me.”

She adds that although he’s adopted, David has “more of my DNA” than any of her other children.

“He's the one I have the most in common with. I feel like he gets me.”

Lourdes might not have the same determination as her mother, but she’s well aware of her goals. These include getting a driver’s licence and “motivating a person or two” to realise their dreams, she said in a recent Vanity Fairinterview.

We live in a world where facts and fiction get blurred
In times of uncertainty you need journalism you can trust. For 14 free days, you can have access to a world of in-depth analyses, investigative journalism, top opinions and a range of features. Journalism strengthens democracy. Invest in the future today. Thereafter you will be billed R75 per month. You can cancel anytime and if you cancel within 14 days you won't be billed.
Subscribe to News24
Related Links
Madonna's daughter, Lourdes Leon makes cheeky Instagram debut
Madonna visits five countries in three weeks amid Covid-19 pandemic
Get a room! Madonna shares rare PDA snap with her toyboy
Next on You
Rupert Murdoch and Jerry Hall are divorcing after six years: how will the media titan share his $17 billion fortune?