Call it The One Where Everyone is Worried about Chandler.

An interview with the cast of Friends in which they promote their upcoming HBO reunion special has people wondering whether Matthew Perry’s old demons have come back to haunt him.

Matthew sat down with co-stars David Schwimmer (Ross) and Matt LeBlanc (Joey) for a video interview with People magazine – but while David and Matt joked and laughed away, he seemed in another world.

Jennifer Aniston (Rachel), Courteney Cox (Monica) and Lisa Kudrow (Phoebe) appeared with the boys in a promo for the show but didn’t join the guys in the panel interview. His castmates appeared unconcerned as David and Matt giggled and smiled at the TV star, who played Chandler Bing on the hit show.(PHOTO: Youtube.com)

While speaking about what it was like to reunite with the cast, Matthew (51) had a slow reaction time, stammered over his words and stared off into the distance.

And when he was asked if he’d ever swiped a souvenir from the set, he appeared to slur. “I stole the cookie jar that had the clock on it,” he said, pronouncing “stole” as “shtole”.

“It pains me to see Matthew Perry like this, he just seems off, gazing at the void, speaking slowly,” another said.

“Hate to say it, but I’m sad and scared like hell for Matthew Perry,” a third remarked.

But others were quick to jump to the actor’s defence, pointing out that the actor had “struggled with addiction and been through so much”.

“Let’s not use the Friends reunion to make fun of the way Matthew Perry looks these days,” one commented.

“People age, funnily enough. Matthew has been through A LOT since friends wrapped up in 2004. Be respectful instead of judgmental.” 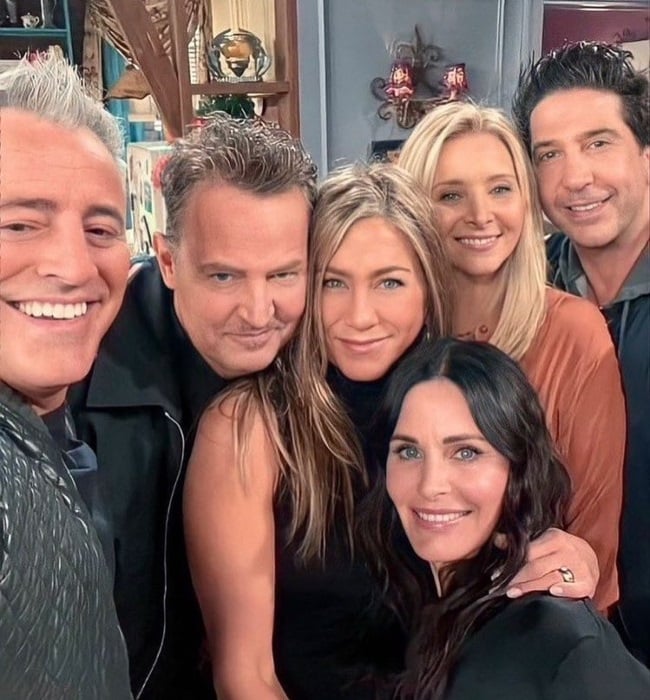 The reunion show, which is set to air on 27 May, will see Matt LeBlanc, Matthew Perry, Jennifer Aniston, Courteney Cox, Lisa Kudrow and David Schwimmer reflect on their memories of the show. (PHOTO: Twitter / @HBOMaxPop)

The actor has been open about his past struggles, previously telling People things got “out of control and very unhealthy” after a 1997 jet-ski accident left him addicted to the painkiller Vicodin."

'Here, take this,'" he recalls the doctors telling him. "I did and I felt better than I ever felt in my entire life. I had a big problem with pills and alcohol, and I couldn't stop."

Things were further complicated by the success of Friends.

"I was on Friends from age 24 to 34. I was in the white-hot flame of fame. The six of us were just everywhere all the time. From an outsider's perspective, it would seem like I had it all. It was actually a very lonely time for me because I was suffering from alcoholism. It was going on before Friends, but it's a progressive disease. I wasn't a massive party guy. I wasn't a bull-in-a-china-shop kind of drinker."

In 1997, he made his first trip to rehab and later described his stay as "the scariest thing that's ever happened to me”.

“You get a whole new respect for yourself and life when you go through something that difficult."

But his sobriety was short-lived and by 2001 he was back in rehab – but not before a two-week stint in hospital for treatment for acute pancreatitis, a condition caused by alcohol and prescription drug abuse.

Matthew has admitted to being so out of that even his glory days on Friends are a little blurry.

In an interview with the BBC three years ago, he was asked which episode of the sitcom was his least favourite.

"I think the answer is, I don't remember three years of it. So, none of those somewhere between season three and six."

He later explained that although he said he never used drugs or abused alcohol while on set, he was almost always, “painfully hungover".

Matthew did his third stint in rehab in May 2011, which a representative said was to prevent a relapse, and things have been looking up for him in recent years.

In November last year he announced he was engaged to 29-year-old literary manager Molly Hurwitz.

The pair were spotted together last month, resurfacing from lockdown in Los Angeles. The pair are said to have been dating since 2018 but the timeline is a bit vague given that Matthew was outed for flirting with a 19-year-old girl on celebrity dating app Raya a year ago.

Earlier this month Kate Haralson, shared a clip of the flirty exchange along with the caption, “When you match with Matthew Perry as a joke on a dating app and he facetimes you and plays 20 questions with you.”

In the 16-second video, a smiling Matthew asks, “Do you always play with your hair this much?” to which she responds, giggling, “I guess so.”

Kate recently told PageSix she shared the clip to show how older men in Hollywood are “taking advantage” of younger women on dating apps. She’s since been kicked off the dating site for breaking privacy guidelines. Earlier this month the engaged Friends star was outed for his flirty exchange with a 19-year-old girl he matched with on celeb dating app Raya. (PHOTO: TikTok / @kittynichole)

We live in a world where facts and fiction get blurred
In times of uncertainty you need journalism you can trust. For only R75 per month, you have access to a world of in-depth analyses, investigative journalism, top opinions and a range of features. Journalism strengthens democracy. Invest in the future today.
Subscribe to News24
Next on You
Loved-up Adele dishes on her relationship with Rich Paul and the biggest risk she's taken