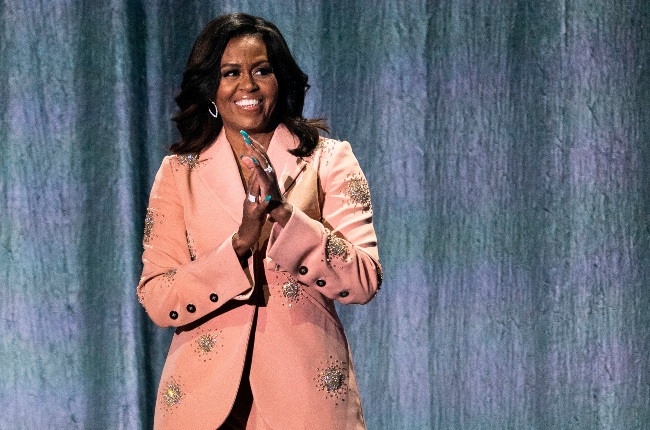 Michelle Obama has spoken about life during the pandemic – including teaching herself to knit. (CREDIT: Gallo Images / Getty Images)

Swimming leisurely laps in a pool and knitting crewnecks? That doesn’t sound like the Michelle Obama we know.

The former first lady has kept a busy schedule since leaving the White House in 2017. She wrote her bestselling memoir, Becoming, has been involved in various entertainment projects such as her new healthy-eating Netflix puppet show Waffles + Mochi, and she actively campaigned for then-Presidential candidate Joe Biden in the 2020 election.

But in a recent interview with People magazine, she hinted at her plans to retire – and spend more time knitting.

The 57-year-old picked up knitting needles to pass time during the coronavirus pandemic and now she’s hooked.

“Knitting is a forever proposition,” she says.

“You don’t master knitting, because once you make a scarf, there’s the blanket. And once you do the blanket, you’ve got to do the hat, the socks.”

“I’m figuring out how to make sleeves and a collar,” she says. “I could go on about knitting!”

The fitness junkie, whose buff biceps went viral during her time as first lady, also used the time during quarantine to change her exercise routine.

"Over quarantine, I actually did teach myself how to be a better lap swimmer, because what I’m finding in my old age is that the high-impact stuff that I used to do, as I’m approaching 60, it just doesn’t work," Michelle says. "So, I thought, well, swimming is one of those low-impact, good cardio things."

Her new hobbies will definitely come in handy soon, as she hinted at her and Barrack’s plans for a graceful step out of the limelight and towards retirement.

"We're building the [Obama] foundation for somebody else to continue the work so we can retire and be with each other – and Barack can golf too much, and I can tease him about golfing too much because he's got nothing else to do."

The former first lady also talks about how the pandemic helped her and her husband reclaim “stolen moments” with their daughters who both returned home from college to quarantine with their parents.

Malia (22) is currently finishing her senior year at Harvard University, while Sasha (19) is in her second year at the University of Michigan.

“Our girls were supposed to have emptied out of my nest,” she says. “I was sort of celebrating that they were out building their lives and allowing me the emotional space to let them go. Well, they’re back!”

But the time has been really good for their evolving relationship, Michelle explained: “This time has allowed us to get some stolen moments back with our girls. Those recaptured moments have meant the world to us, and I think they've made our relationships with our children even stronger.”

But despite the valuable time spent bonding, it wasn’t all sunshine and roses at Casa Obama.

"We kind of had phases of Covid," she admitted. "There was sort of the early stages where we were all being organised and we would spend the days apart doing our respective work. The girls were still in classes in the spring, and so we would be working and then doing a little exercise, and then come together in the evenings. We would have these activities. We would have cocktails, and then we would work puzzles, and play games."

But, as the rest of us can probably attest, this fun quarantine time only lasts so long.

"I think first our kids got a little sick of us, which was fine because we were pretty much sick of them.”

Barack has also been regaling talk show hosts with stories from inside the Obama family dynamic as he promotes his new book, A Promised Land.

The 59-year-old had an interesting answer when US talk show host Jimmy Kimmel asked him if he is indeed afraid of his youngest daughter, Sasha, as his wife claims.

"Yes. And the reason is because Sasha is a mini-Michelle, and I'm afraid of Michelle, and Sasha, having seen that, has the same look and the same attitude,” he told Jimmy. “Malia is more like me temperamentally. We call ourselves 'the long faces' because her face is more shaped like mine. 'The round faces' are Michelle and Sasha. And the round faces are a fiercer tribe. We're like the vegetarians – the gatherers, and they're the hunters. We try to keep the peace with them."

We live in a world where facts and fiction get blurred
In times of uncertainty you need journalism you can trust. For only R75 per month, you have access to a world of in-depth analyses, investigative journalism, top opinions and a range of features. Journalism strengthens democracy. Invest in the future today.
Subscribe to News24
Related Links
Barack Obama opens up about the perks and pitfalls of life in the White House in his new memoir
You’re going to love it here! The sweet way the Bush family welcomed the Obama girls to the White...
‘There were times I wanted to push Barack out the window’ – Michelle Obama
Next on You
The saucy secret behind Kate Hudson's fabulous figure