He has been making the news headlines for everything but tennis lately.

Last week, after Novak Djokovic arrived in Australia to compete in the Australian Open, he was temporarily barred entry because he’s not vaccinated. According to the 34-year-old tennis star, he had a Covid infection mid-December, but has since remained Covid-free meeting the conditions for foreigners entering the country.

But authorities cancelled his visa saying it was not a valid exemption and he was then held at a temporary detention facility in Australia for five days while he challenged his deportation order. Novak's parents, Dijana and Srdan, and their youngest son, Djordje, during a recent media conference where they expressed their support for Novak's stance on Covid-19 vaccinations. (PHOTO: Gallo Images/ Getty Images)

Then on Monday his visa cancellation was overturned with officials saying the immigration officials failed to follow the proper procedure. And after the successful appeal of the denial of his visa, the tennis player was allowed into Melbourne with a medical exemption from a Covid-19 vaccine mandate.

Eventually he was included in the Australian Open draw, but his stay in the country still hangs in the balance because officials say his status could change at any moment. The world number one Serbian tennis star has been making headlines for everything but tennis lately. (PHOTO: Gallo Images/ Getty Images)

But while the player received backlash for what happened, the anti-vaxxer tennis superstar also gained a lot of support from athletes, fans and his family. His two brothers especially have been making headlines.

Social media can’t seem to get enough of his easy-on-the-eye younger brothers. While Novak's parents, Srdan and Dijana, were answering questions during a media conference earlier this week, the attention was more on Djordje Djokovic, one of the tennis star's brothers who was at his parents’ side.

READ MORE | Drama for days: the sports stars who made headlines for all the wrong reasons

Dressed in a grey turtleneck, the 26-year-old Djordje spoke confidently to the media, criticising the Australian authorities for treating his older brother like a “criminal” and saying his famous brother was “only fighting for liberty of choice”. Djordje Djokovic at the press conference. He has been by his brother's side during this ordeal. (PHOTO: Gallo Images/ Getty Images)

His middle brother, Marko (30), who is also a professional tennis player, showed his support for his brother on Instagram earlier this week, thanking him for “finally showing us that we are 8 billion people on this beautiful planet Earth, and that we all deserve equal treatment”. 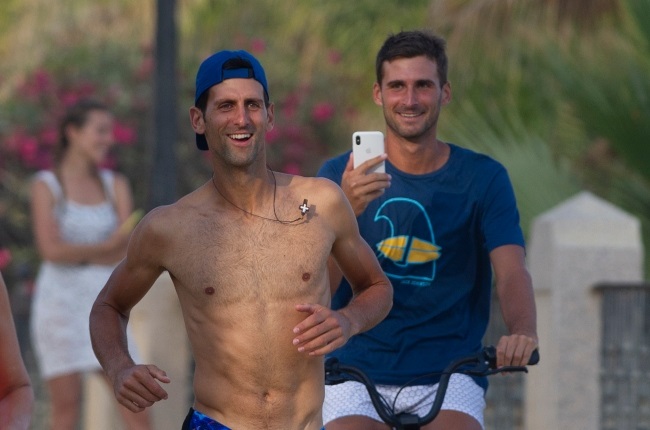 Novak and Marko, who is also a professional tennis player and coach. Here they are in Marbella, Spain, in 2018. (PHOTO: Gallo Images/Getty Images)

Social media lapped it all up.

“One good thing to come out of this #Novak_Djokovic debacle is discovering his brother is really hot,” one person tweeted.

“Very pleased for you but the one thing that has come out of all this, watching press conferences etc + following the case ...how HOT is ur brother!” another said.

A QUICK LOWDOWN ON THE DJOKOVIC BROTHERS

• Marko is also a professional tennis player and tennis coach. He retired from singles after he was listed at 574 in the ATP rankings in 2019.

• The blond-haired brother is in a long-term relationship with Brazilian fashion designer Leticia Tesara and the two live on the Spanish island of Mallorca.

• He also has a dog and seems to love nature, often posting pictures of the outdoors on his Instagram page.

• The baby of the Djokovic clan, Djordje is a 26-year-old tennis player and has played doubles with Novak but has not been able to break through the rankings like his oldest brother has.

• The dark-haired hunk is said to be dating Arena Sport TV host Saska Veselinov. She often posts of the two of them on her Instagram page. She even made her support for Novak public earlier this week.

• He doesn't seem to have an official Instagram page but it’s no surprise that he has a number of fan accounts.

We live in a world where facts and fiction get blurred
In times of uncertainty you need journalism you can trust. For only R75 per month, you have access to a world of in-depth analyses, investigative journalism, top opinions and a range of features. Journalism strengthens democracy. Invest in the future today.
Subscribe to News24
Related Links
Passport to normal: the lowdown on the Covid vaccination certificate and why you need it
MY STORY | Life-threatening Covid changed me from an anti-vaxxer to a vaccine advocate
Antivaxxers among your loved ones? Here's how to navigate those difficult Covid-19 vaccine...
Next on You
Why Hugh Hefner's widow Crystal removed her implants and ditched her sex symbol status