It seems there’s no end to R.Kelly’s legal woes. The disgraced singer sought to delay punishment on his New York-based sex-trafficking and racketeering conviction until his separate trial in federal court in Chicago wraps up, but a judge has flat out refused his request.

Kelly’s sentencing for his New York trial was initially set for 4 May and he faces up to 10 years in prison. But the 55-year-old also has a separate trial for multiple allegations of sexual abuse in Chicago scheduled for August. The disgraced singer faces another trial in his hometown, Chicago, later this year. (PHOTO: Getty/Gallo images)

His new lawyer, Jennifer Ann Bonjean, told the court Kelly deserves a chance to work with a sentencing mitigation expert without fear “his words might be used against him in some manner” at his next trial. Prosecutors, however, argued that his victims have waited years to see him held to account and sentenced for his crimes and that postponing would reflect negatively and undermine the integrity of the court.

The judge denied Kelly’s request and the singer will now hear his fate on 16 June.

Kelly was convicted in September last year on various charges that included racketeering, bribery, child pornography and sexual assault. He was found guilty of nine charges following a six-week-long trial in New York that saw 11 accusers – two males and nine females – take the stand to detail sexual offences they suffered at his hands.

The court also heard how Kelly, then 27, had illegally obtained paperwork to marry late singer Aaliyah when she was just 15 years old in 1995. According to the marriage certificate, Aaliyah is listed as 18 years old. 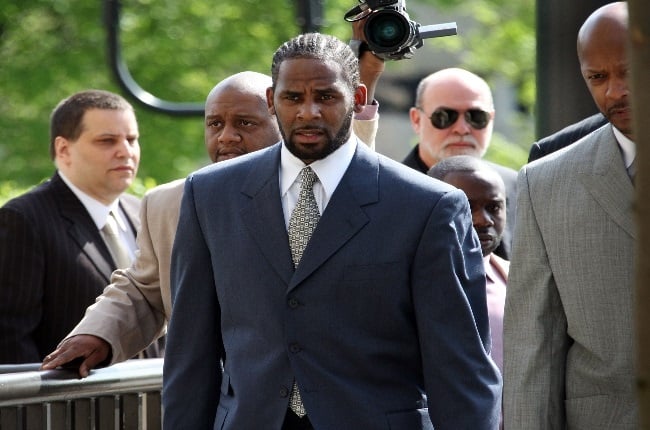 R. Kelly has maintained his innocence throughout his trial. (PHOTO: Getty/ Gallo)

Demetrius Smith, Kelly’s former tour manager, testified at the trial, revealing that he had paid a government official to create a fake ID for Aaliyah, who died in a plane crash in 2001, aged 22.

Kelly maintained his innocence throughout and went as far as seeking to overturn his conviction. Prosecutors cited this as another reason to proceed with the 16 June sentencing, stating that the singer was unlikely to plead guilty.

READ MORE | Here's why experts believe rapper Ye's public harassment of his ex, Kim Kardashian, is a form of abuse

He also faces a new trial in Chicago in August. Kelly is accused of videotaping himself having sex with underage girls, and paying hush money and intimidating witnesses to cover up his crimes.